How's Hollywood to plan when it doesn't know who's watching what?

The box office remains sunken and scattershot, with once-reliable audience patterns upended by the coronavirus pandemic and, for many films, ticket sales cannibalised by instant availability on streaming services 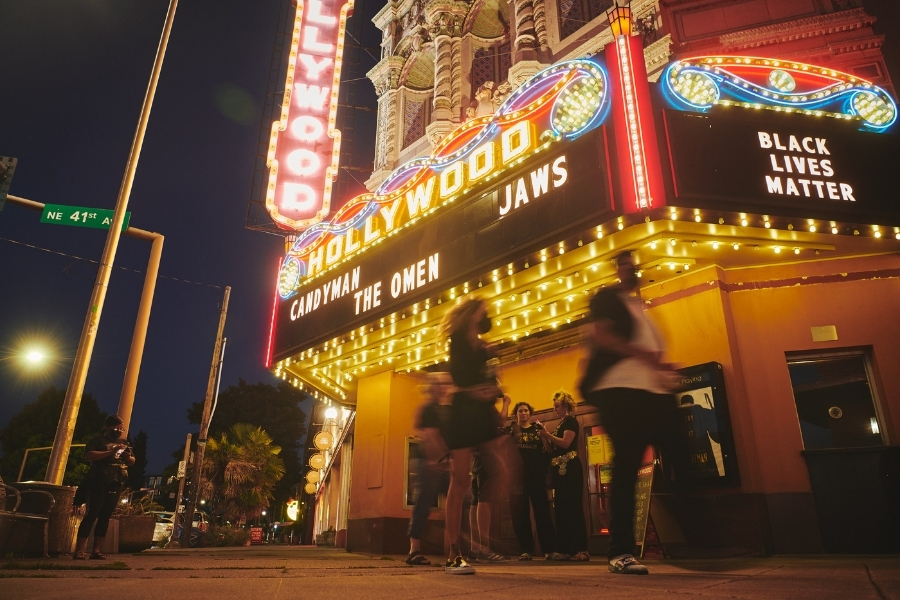 Moviegoers at the Hollywood Theatre in Portland, Ore., Aug. 28, 2021. With box office numbers way down in the coronavirus pandemic and streaming numbers hard to come by, the film industry is often unable to determine whether a movie is a hit or a miss. (Leah Nash/The New York Times)
LOS ANGELES — Labor Day weekend is typically a moment for Hollywood to take a breath and assess. After the big-budget escapism of summer and before the Oscar hopefuls of fall, what signals are moviegoers sending?

Reading box-office tea leaves is like pontificating about symbolism in works of fiction: Any halfway plausible theory works. But studio bosses need something, anything to guide them as they make billion-dollar judgment calls for the seasons ahead.

“Superheroes still seem to sell — keep raiding the comic books.” “Rom-coms were roadkill — no more of those.” Or whatever.

This year, the only takeaway is that there are no takeaways.

The box office remains sunken and scattershot, with once-reliable audience patterns upended by the coronavirus pandemic and, for many films, ticket sales cannibalized by instant availability on streaming services. More and more, films are bypassing theaters and debuting exclusively on Amazon Prime Video, Netflix, Apple TV+ and others, but those companies refuse to disclose meaningful viewership data.

North American movie theaters have sold about $2.2 billion in tickets so far this year, compared with $7.8 billion for the same period in 2019, according to Comscore, which collects ticketing data. (Many theaters were closed for most of 2020.)

The result is a film industry in a fog, in many cases unable to even ascertain whether a movie is a hit or a miss. How do you assign value if you don’t know?

“There’s a real abstraction to what success looks like,” said Nina Jacobson, a film and television producer and a former president of Walt Disney Studios. “It’s not just about money. For us, success is really about: Did it matter? Did people talk about it? It is very easy to just get lost in a mountain of content.”

“At least before, we had the language of box office,” added Jacobson, whose credits with Brad Simpson, her producing partner, include “Crazy Rich Asians” and the upcoming miniseries “Impeachment: American Crime Story.”

Box-office scorecards — daily totals by film, available for all to see — became common in the 1980s after consultants started using computers to collate data from thousands of theaters. Before that, Variety magazine gathered limited information, and studios disclosed numbers only when it suited them, much as streaming services do today. Agents quickly seized on the statistics to win bigger paydays for clients. Positive numbers became a routine part of the movie marketing playbook. (“America’s No. 1 Comedy!”) With national news outlets reporting tallies every Sunday, Hollywood’s business turned into everyone’s business.

But the pandemic and streaming-service onslaught have severely disrupted the industry.

Most movies no longer roll out as they once did — first in theaters for an exclusive run of about three months, then online for rental and purchase, then on streaming services and television. Now, dozens of films are mostly viewed online. Netflix alone plans to release 41 original movies between early this month and the end of the year. Universal has been making films available in homes through premium video on demand after as little as 17 days of theatrical play. Warner Bros. movies have been arriving simultaneously in theaters and on HBO Max.

Against that backdrop, is success still about strong ticket sales? Is it more about growing a streaming-service subscriber base? Or is it some nebulous combination of both?

Those questions form the center of Scarlett Johansson’s lawsuit against Disney. She contends that Disney’s decision to simultaneously release “Black Widow” in theaters and on Disney+ lowered her pay for starring in the film — at the same time bolstering Disney+ and thus the company’s standing on Wall Street. Disney has said her complaint has “no merit.”

Or maybe there has been a deeper shift. Do people, now accustomed to an on-demand world, feel less of a need to rush out to see the latest film? That would mean box-office expectations need to be reset. New releases are now competing with seemingly every film or television show ever made, all streaming on one service or another.

“People are searching for answers, and there are no easy ones to be found,” said Gail Berman, president of the Producers Guild of America and a past president of Paramount Pictures. “In terms of producers, I keeping telling people to just keep pushing toward quality — quality storytelling always wins out, always — and that they can’t stop for ‘Oh, my feelings are hurt’ or ‘This isn’t how it used to be done.’”

“The Suicide Squad” should have been a big hit for Warner Bros. last month. It had superheroes, a marquee director (James Gunn), a huge production budget ($185 million) and received terrific reviews. But instead of delivering a box-office ka-pow, it went ker-thud: Ticket sales total $156 million (split roughly 50-50 with theaters), compared with $747 million for the first “Suicide Squad” in 2016.

Of course, the latest one had to battle a pandemic. And it was also made available free on HBO Max in lockstep with its theatrical debut. On that platform, it was a relative success — at least according to HBO Max, which heralded “The Suicide Squad” as the service’s second-most-viewed movie debut of the year.

But it offered no numbers.

“Paw Patrol: The Movie” (Paramount) was released simultaneously in theaters and on Paramount+ late last month. It took in $13 million over its first weekend, enough for second place behind “Free Guy,” a holdover. But the actual demand for “Paw Patrol” was shrouded. Regal Cinemas, the second-largest multiplex chain in the United States, behind AMC Entertainment, refused to play the animated adventure because of its streaming availability. Paramount+ on Aug. 25 said the movie “ranked as one of the service’s most-watched originals.”

But it offered no numbers.

In contrast, Disney-Marvel released “Shang-Chi and the Legend of the Ten Rings” exclusively in theaters Friday. Disney’s CEO had called the old-fashioned release an “experiment.” Would the coronavirus keep people at home?

In surveys in late August of American moviegoers by National Research Group, a film industry consultant, about 67% of respondents said they felt comfortable (“very or somewhat”) sitting in a theater. Disney has cited coronavirus concerns for making films such as “Jungle Cruise,” “Cruella” and “Black Widow” available in homes on Disney+ at the same time as in theaters (even though Hollywood has suspected that the real reason — or at least an equally important one — has been boosting Disney+).

The crystal-clear result: Audiences flocked to “Shang-Chi,” which was on pace to collect $83.5 million from 4,300 theaters in the United States and Canada from Friday through Monday, according to Comscore, which compiles box-office data. Overseas, the well-reviewed movie, notable for being Marvel’s first Asian-led superhero spectacle, generated an additional $56.2 million. “Shang-Chi” cost roughly $200 million to make.

A return to pre-pandemic times? Maybe. Or maybe Marvel, Hollywood’s most reliable hitmaker for 20 years, is an anomaly.

In truth, nobody in Hollywood has any idea. Citing continued uncertainty about the coronavirus, especially overseas, Paramount Pictures on Wednesday bumped “Top Gun: Maverick” from November to May. “Still Many More Questions Than Answers” was the title of a recent report on the Cinemark theater chain by Robert Fishman, a MoffettNathanson analyst.

Going strictly by summer ticket sales, horror continued to be a reliable performer. “A Quiet Place Part II,” which cost Paramount about $60 million to make, collected $300 million worldwide — a runaway success by pandemic standards. It was released in May, before the delta variant began sweeping the globe.

“We were kind of the canary in the coal mine, but we knew we had something special,” said Marc Weinstock, Paramount’s president of worldwide marketing and distribution. “The results were so positive that it gave everyone else the confidence to stay in the summer.”

“The Conjuring: The Devil Made Me Do It” (Warner Bros.) and another horror film, Nia DaCosta’s “Candyman” (MGM-Universal), also succeeded, Gross noted. “Candyman” debuted at No. 1, a first for a Black female director.

Films aimed at older audiences continued to struggle. “Reminiscence,” starring Hugh Jackman, was a hall-of-fame-worthy misfire, costing roughly $60 million to make and arriving to $1.9 million in ticket sales. “Older audiences — those over 35 up through baby boomers — are thinking about their health more than younger audiences, and they can afford better home entertainment options,” Gross said.

Even escapism had mixed results. Disney’s well-reviewed “Free Guy,” about an ordinary man who turns up inside a video game, is viewed as a success with $239 million in global sales. It cost $115 million to make and an estimated $100 million to market. A sequel is in the works.

But “Snake Eyes: G.I. Joe Origins” was a disappointment, along with “The Boss Baby: Family Business,” which has so far taken in $100 million worldwide, or roughly $400 million less than its franchise predecessor in 2017. The sequel, which is still rolling out overseas, was another hybrid release in the United States, arriving simultaneously in theaters and on Peacock, NBCUniversal’s streaming service.

On a recent conference call with analysts, NBCUniversal’s parent company, Comcast, cited the film’s availability on Peacock as one reason the service had a subscriber increase in July.

But it released no viewership numbers.

Tweets by @forbesindia
The roots of corporate social irresponsibility
Photo of the day: Just in time