More than 60 people have been killed since a Feb. 1 coup ousted Myanmar's civilian leaders, returning the country to full military rule 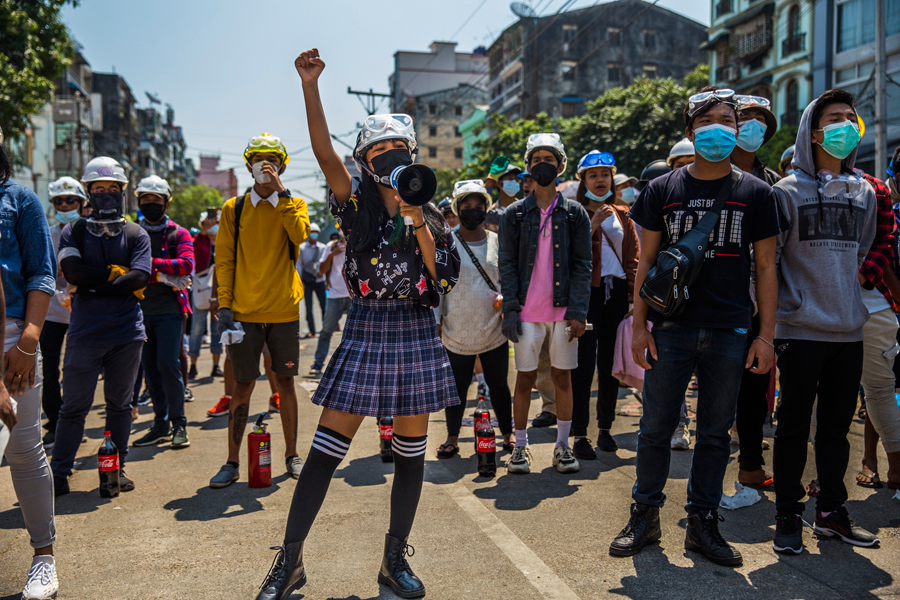 People protest in Yangon, Myanmar, Monday, March 8, 2021, against the military coup. Workplaces across Myanmar were shuttered on Monday, part of a general strike aimed at strangling the power of military rulers who toppled an elected government last month. (The New York Times)

Workplaces across Myanmar were shuttered Monday, part of a general strike aimed at strangling the power of military rulers who toppled an elected government last month. But if manufacturing and commerce were idled, anger at the brutality of the military flared further, despite the increased presence of security forces in urban centers and a tougher clampdown on the press.

At least two participants in a mass protest movement were shot dead Monday in Myitkyina, a city in northern Myanmar, where Roman Catholic nuns dropped to their knees to plead for soldiers to stop the killing. Another protester was fatally shot in the abdomen in Pyapon, a town not far from Yangon, Myanmar’s commercial capital. The deaths were reported by medical workers and relatives.

And in Yangon itself, hundreds of people were trapped in a security force cordon Monday night, fearing arrest or worse.

“Help,” wrote one of the people who said he was stuck. “The military troops have blocked every single way out.”

More than 60 people have been killed since a Feb. 1 coup ousted Myanmar’s civilian leaders, returning the country to full military rule. About 1,800 others have been detained, according to a local group that monitors political prisoners.

On Monday evening, the restrictions tightened even more when state television, which is now controlled by the military, announced that licenses had been revoked for five independent media organizations, a severe blow to what had been the nation’s vibrant free press. Dozens of reporters have been detained since the putsch. The stripping of the media licenses could now make their very act of reporting illegal.

Back when a military junta fully ruled Myanmar for nearly five decades, censorship committees regularly excised news from the country’s newspapers, leaving rumors to flourish amid the information blackout.

“It’s totally unacceptable to allow the military to base itself in the hospital,” said Dr. Kyaw Swar, a medical officer at Yangon General Hospital, where soldiers set up camp. “Hospitals are not the place for them. They have been insolent. But they have guns.”

In the city of Mandalay, in central Myanmar, military trucks stormed university campuses, including Mandalay Technological University, where a convoy of four vehicles arrived amid tear-gas and rubber bullets, according to witnesses.

“They are terrorists,” he said of the military. “I think they are trying to prepare for a brutal war against the people.”

At the Mahamuni Buddha Temple in Mandalay, Kesara Viwunsa, the abbot, said that soldiers had taken over the pagoda’s grounds for a month.

“No one comes to worship here anymore because people are afraid of them,” he said.

The Global New Light of Myanmar, a state-run newspaper that acts as a loudspeaker for the military rulers, said Monday that such spaces were being occupied because members of the public had requested that the Tatmadaw, as the Myanmar military is known, “control the public universities and hospitals and to take action effectively for the benefit of the people.”

The publication also warned that even working “indirectly” with a group of lawmakers who have set themselves up as a kind of government in exile would be considered a crime.

For days now, people in Myanmar have been discussing “R2P,” shorthand for the United Nations’ “responsibility to protect” policy, which allows for intervention by the international community “should peaceful means be inadequate and national authorities manifestly fail to protect their populations from genocide, war crimes, ethnic cleansing and crimes against humanity.”

The principle was used to help justify foreign military intervention in Libya in 2011 and came into being after the United Nations admitted it had failed to stop atrocities from being committed in the Balkans and Rwanda. In Myanmar, the hashtag #R2P has trended on Twitter, and people have written giant signs on streets asking for foreign militaries to please invade.

The international community has verbally condemned the Tatmadaw’s takeover of power, with some countries tightening targeted sanctions on military officers and military companies. But Myanmar’s most significant foreign investors, such as Singapore and China, have not taken significant steps to financially punish the military.

When the generals seized power last month, they announced they had been compelled to take action because of what they called massive voter fraud in elections in November, which were resoundingly won by the National League for Democracy. The generals said they would hold elections in a year’s time. But the timetable for future polls has already shifted to one to two years, according to pronouncements in the state media.

The last time the military annulled the results of an election, in 1990, it took a quarter century for full and fair general elections to be held again.

Tweets by @forbes_india
Oil giants prepare to put carbon back in the ground
Food Waste: How much food do we throw away every year?