Being handed control of the company, which is valued at $1.2 billion, has made Iole Lucchese, one of the most powerful women in book publishing

By Katherine Rosman and Elizabeth A. Harris 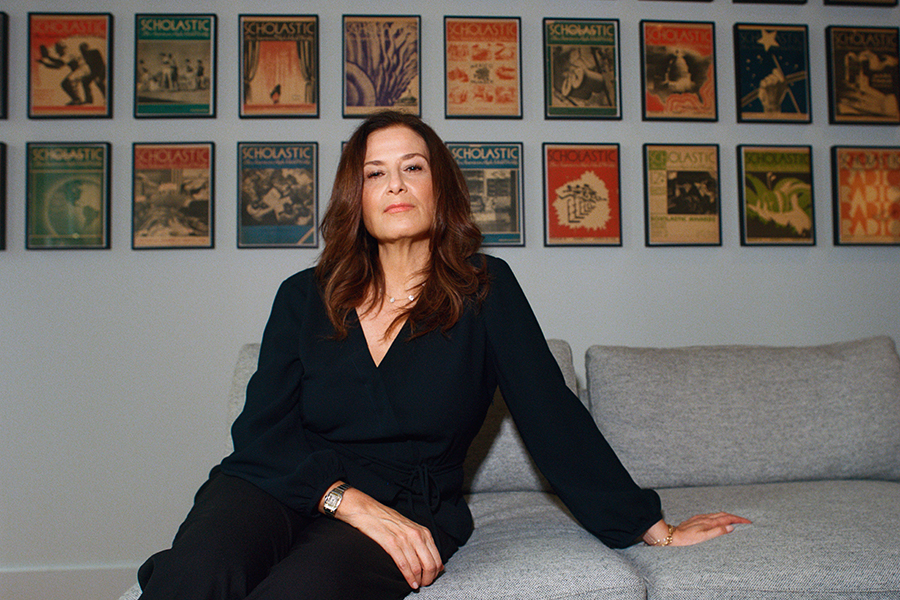 Iole Lucchese, a senior executive and the new chairwoman of Scholastic, at the company’s offices in Manhattan on Oct. 4, 2021. The powerhouse children’s publisher, known for Harry Potter, had been passed from father to son until Lucchese was given control. (Lelanie Foster/The New York Times)

When her phone buzzed June 6, Iole Lucchese was still absorbing a shock that had come the day before. Her longtime boss, M. Richard Robinson Jr., chairman and CEO of the Scholastic publishing company, had died suddenly while taking a walk with one of his sons and his former wife on Martha’s Vineyard.

He had called to inform her that 84-year-old Robinson — who turned his father’s book and magazine business into the largest publisher and distributor of children’s books in the world, known for thousands of beloved series, including "Clifford the Big Red Dog," "Hunger Games" and "Harry Potter" — had left Lucchese 53.8% of Scholastic’s Class A stock. The company where she had worked for 30 years, rising from a junior employee in the Canadian market to one of its top executives, was now a company she controlled.

“It was overwhelming,” Lucchese said in an interview at Scholastic’s headquarters in the New York City neighborhood of SoHo, water towers punctuating the cityscape behind her.

Being handed control of the company, which is valued at $1.2 billion, has made Lucchese, 55, one of the most powerful women in book publishing, and the stock provides her — the daughter of a construction worker and a homemaker — with significant wealth. The gift also shifts the business, which had been passed from father to son, to a person outside the family and puts Scholastic in an extremely unusual position for a public company: adapting to a succession plan many key players did not know was coming.

In his will, Robinson described Lucchese as “my partner and closest friend.” But an article in The Wall Street Journal described them as “longtime romantic partners.” Six former employees, who spoke on the condition of anonymity because they were reluctant to cause further embarrassment to Robinson’s sons, confirmed to The New York Times that the romantic relationship between Lucchese and Robinson had been well known among many Scholastic employees.

“We were great business partners and close friends,” said Lucchese, a senior executive responsible for strategy and the company’s entertainment division.

She declined to address the Journal’s claim that she and Robinson had been involved in a relationship, which the employees believe ended a few years before his death.

This was Lucchese’s first interview with the news media since the death of Robinson, whom everyone called Dick. She was joined at a round conference table by Peter Warwick, the company’s new CEO, and flanked by two publicists, one from Scholastic and another from the public relations firm Edelman.

“Dick understood that I shared his passion for Scholastic, and what this company means to the teachers we serve, to the children we serve, to everyone,” Lucchese said of his decision to leave his Class A shares to her. “He trusted me with that legacy, and I think it’s because we worked together and he knew that we were aligned.”

That bequest bypassed his two sons, John Benham Robinson, 34, known as Ben, and Maurice Robinson, 25, known as Reece. Robinson’s sons declined to comment for this article.

Scholastic said in a statement that the board had regular discussions about succession at the company.

‘An envelope in a safe’

“Scholastic announces the untimely death of its chairman and CEO M. Richard (Dick) Robinson, Jr.,” a company news release declared the day after Robinson died. It emphasized that his passing had been unexpected and sudden, even though he was 84 years old.

About six weeks later, Lucchese’s new position as chairwoman was made public, with the company including that update midway through a news release titled “Peter Warwick Named Chief Executive Officer of Scholastic Corporation.”

When a reporter for the Times emailed Scholastic in August requesting an interview with Lucchese, Ira Gorsky, executive vice president at Edelman, the public relations company, called to inquire about whether Lucchese would be asked about “the alleged affair,” saying, “You can see how this is offensive, how the allegations implied that she has not gotten to her position because of merit.”

Gorsky said that as “a ground rule for giving an interview,” the Times reporter could not ask Lucchese about a personal relationship with Robinson. When the reporter declined to agree to such limitations, Gorsky responded: “Then we’re done.”

Lucchese did eventually agree to be interviewed, and no one representing her asked again for restrictions on topics or questions. Aside from an hourlong conversation with Lucchese and Warwick, preceded by a tour of the company’s archive led by a librarian, Scholastic declined to make any other employee available.

Wall Street does not know her as well as some players in Hollywood do. Scholastic’s largest investor, after the Robinson family, was not aware of Robinson’s succession plan. “On a number of occasions, I asked Dick,” said David Wallack, a portfolio manager for T. Rowe Price, the Baltimore-based investment company, which holds more than 18% of the company’s common stock.

“He would tell me, ‘When I die, there is a safe, and there is an envelope in the safe, and the board of directors will open the safe and see what my wishes were,’” said Wallack, who was in regular touch with Robinson for 20 years. “I thought it was hyperbole.”

In its statement, Scholastic described the transition process this past summer as smooth and efficient, saying that an interim team had taken over, as planned, immediately after Robinson’s death and that six weeks later, Warwick and Lucchese had been appointed to their new roles.

“Throughout this period — which was also set in the challenging landscape of schools reopening after COVID shutdowns — the company ensured the seamless continuation of operations, supporting teachers and students during a historic back-to-school season,” the statement said.

Wallack said he had hoped that after Robinson died, the board would conduct a broad search of internal and outside candidates for the CEO role and elevate a board member to chair. He said that in July, when the board named Warwick, a board member since 2014, as CEO and brought Lucchese onto the board as chair, “we were shocked for sure.”

Hedden, the company’s general counsel, a board member until this summer and co-executor of Robinson’s estate, said in a statement that he was not aware of Robinson’s plans. “From my knowledge of Dick, I know that he made his decisions around his will privately, as was his nature,” Hedden said, “and that he had the best interests of Scholastic and the continuation of his legacy in mind.”

But Robinson’s legacy includes a messy succession drama that spills into family drama as well. His will names Lucchese a co-executor and gives her his personal property, “with the request, but not the direction” that she distribute it to his children in what “she believes to be in accordance with my wishes.”

The fact that the leadership of a public company hinged on the surprising bequest could represent a breach of duty on the part of the board, said Jeffrey Sonnenfeld, senior associate dean of leadership studies at the Yale School of Management.

“If he were 40 years old, they should have had a plan,” Sonnenfeld said. “And when you’re talking about an octogenarian, the odds are not in his favor.”

Lucchese, one of Robinson’s closest business associates and the woman in control of the company, chose not to deliver remarks herself. Instead, she wrote a note in the program that appeared under a picture of Robinson’s broad smile.

“Dick knew that Scholastic could uniquely empower children to overcome obstacles,” she wrote. “He knew this work was worth doing, and he inspired in all of us the passion to get it done.”

The message was signed, “Iole Lucchese, Chair of the Board.”