We now know what the Milky Way black hole looks like

The first picture of "the gentle giant" dwelling at the center of our galaxy is a supermassive black hole, a trapdoor in space-time through which the equivalent of four million suns have been dispatched to eternity, leaving behind only their gravity and violently bent space-time 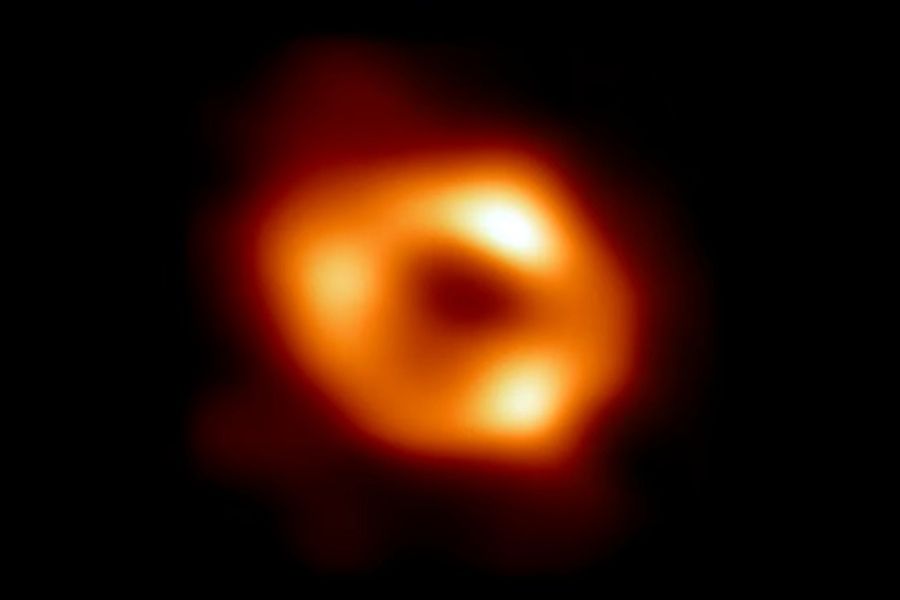 An image provided by the Event Horizon Collaboration and the National Science Foundation shows the first direct image of Sagittarius A*, the black hole at the center of the Milky Way. Astronomers announced on Thursday, May 12, 2022, that they had pierced the veil of darkness and dust at the center of our Milky Way galaxy to capture the first picture of “the gentle giant” dwelling there: a supermassive black hole, a trapdoor in space-time through which the equivalent of four million suns have been dispatched to eternity, leaving behind only their gravity and violently bent space-time. Image: Event Horizon Collaboration/National Science Foundation via The New York Times

Astronomers announced Thursday that they had pierced the veil of darkness and dust at the center of our Milky Way galaxy to capture the first picture of “the gentle giant” dwelling there: a supermassive black hole, a trapdoor in space-time through which the equivalent of 4 million suns have been dispatched to eternity, leaving behind only their gravity and violently bent space-time.
The image, released in six simultaneous news conferences in Washington, D.C., and around the globe, showed a lumpy doughnut of radio emission framing empty space.
Oohs and aahs broke out at the National Press Club in Washington when Feryal Ozel of the University of Arizona displayed what she called “the first direct image of the gentle giant in the center of our galaxy.” She added: “It seems that black holes like doughnuts.”
Ozel is part of the Event Horizon Telescope project, a collaboration of more than 300 scientists from 13 institutions that operates an ever-growing global network of telescopes to compose one large telescope as big as Earth.
The team’s results are being published Thursday in The Astrophysical Journal Letters.
“I met this black hole 20 years ago and have loved it and tried to understand it since,” Ozel said. “But until now, we didn’t have the direct picture.”
In 2019, the same team captured an image of the black hole in the galaxy Messier 87, or M87. That image, the first ever taken of a black hole, is now enshrined in the Museum of Modern Art in New York. “We have seen what we thought was ‘unseeable,’” Sheperd Doeleman, an astronomer at the Harvard-Smithsonian Center for Astrophysics, said at the time.
Astronomers said the new result would lead to a better understanding of gravity, galaxy evolution and how even placid-seeming clouds of stars like our own majestic pinwheel of stars, the Milky Way, can generate quasars, enormous geysers of energy that can be seen across the universe.
At Thursday’s news event, Michael Johnson, a team member and also of the Harvard-Smithsonian Center, said: “This is an extraordinary verification of Einstein’s general theory of relativity.”

Black holes were an unwelcome consequence of the general theory of relativity, which attributed gravity to the warping of space and time by matter and energy, much in the way that a mattress sags under a sleeper.
Einstein’s insight led to a new conception of the cosmos, in which space-time could quiver, bend, rip, expand, swirl and even disappear forever into the maw of a black hole, an entity with gravity so strong that not even light could escape it.
Einstein disapproved of this idea, but the universe is now known to be speckled with black holes. Many are the remains of dead stars that collapsed inward on themselves and just kept going.
But there appears to be a black hole at the center of nearly every galaxy, ours included, that can be millions or billions of times as massive as our sun. Astronomers still do not understand how these supermassive black holes have grown so big.
Since 1974, the center of the Milky Way has been known to coincide with a faint source of radio noise called Sagittarius A* (pronounced Sagittarius A-star). Astronomers including Andrea Ghez of the University of California, Los Angeles and Reinhard Genzel of the Max Planck Institute for Extraterrestrial Physics had calculated that whatever was there had the mass of 4.14 million suns and was confined within a sphere the size of Mercury’s orbit around the sun. They reached that estimate by tracking the orbits of stars and gas clouds swirling about the center of the Milky Way and measuring their velocities at one-third the speed of light. For their achievement, Genzel and Ghez won the Nobel Prize in physics in 2020.
What else could Sagittarius A* be but a black hole?

Proving that it was a black hole was another job entirely. Seeing is believing.
Astronomers ever since have been trying to sharpen the acuity of their telescopes to resolve the shadow of that orange. But ionized electrons and protons in interstellar space scatter the radio waves into a blur that obscures details of the source. “It’s like looking through shower glass,” Doeleman said recently.
To see deeper into the black hole shadow, researchers needed to be able to tune their radio telescopes to shorter wavelengths that could penetrate the haze. And they needed a bigger telescope.
In 2009, Doeleman and his colleagues formed the Event Horizon Telescope, named after the point of no return around a black hole. Today, the collaborative project employs 11 radio telescopes around the world.
The team scored its first triumph in April 2019, when it presented a picture of the M87 black hole. In 2021, team members refined their data to reveal magnetic fields swirling around the black hole like a finely grooved rifle barrel pumping matter and energy into the void.
The data for Sagittarius A* were recorded during the same observing run in 2017 that produced the M87 image, but with more antennas — eight instead of seven — because the team was able to include a South Pole telescope that could not see M87.
The Milky Way’s black hole is a “gentle giant” compared to the one in M87, which sends quasars shooting across space. “If our black hole were a person,” Johnson said of Sagittarius A*, “its diet would consist of one grain of rice every million years.”
It is ravenous and bright “but inefficient,” he added. “It’s only putting out a few hundred times as much energy as the sun, despite being 4 million times as massive. And the only reason we can study it at all is because it’s in our own galaxy.”
Our black hole was more difficult to observe than the one in M87 for another reason: At less than one-thousandth the mass and size of the M87 hole, ours evolves more than 1,000 times faster, changing its appearance as often as every five minutes. Ozel described it as “burbling and gurgling.”
In contrast, the M87 black hole barely budges during a weeklong observing run, “like the Buddha, just sitting there,” Doeleman said.
“So over a night of observing, it’s changing while you’re collecting data. You’re trying to take a picture of something with the lens cap off and you just get this blurry mess.”
On Thursday, Katherine Bouman, a team member and computer scientist at the California Institute of Technology, said that making a picture from the 3.5 petabytes of data from the observations was “like listening to a song being played on a piano that has a lot of missing keys.”
Using a technique called Very Long Baseline Interferometry, the antennas in the network were paired off with each other one-by-one, like individuals shaking hands with everyone in a crowd. The more telescopes in the network, the more such handshakes can be performed and their results compared. Computer algorithms could then begin to fill in the missing data and simulate the possible structure of the black hole disk.
Most of these simulations portrayed a ring about as big as the orbit of Mercury, consistent with the predictions from Einstein’s equations and the observations by Genzel and Ghez.
“Astoundingly, our findings corroborate predictions made more than 100 years ago,” said Lia Medeiros, a team member and astrophysicist at the Institute for Advanced Study in Princeton, New Jersey.
Not all is perfect, though. The computer simulations estimated that the black hole should be noisier and more turbulent. “Something is missing,” said Priya Natarajan, a Yale University astronomer who studies black holes and galaxy formation.
Doeleman’s next goal is to expand the network to include more antennas and gain enough coverage to produce a movie of the Milky Way’s black hole. The challenge for black-hole cinema will be to delineate the underlying structure of the black hole from the matter that is moving around in it.
Kip Thorne, a Nobel Prize laureate and black hole expert at Caltech, said he was eagerly awaiting reliable movies of the gas flow around the black hole: “That is where major new insights and perhaps surprises may come.”
The results could be spectacular and informative, agreed Janna Levin, a gravitational theorist at Barnard College of Columbia University, who was not part of the project. “I’m not bored with pictures of black holes yet,” she said.