Last week, the average out-of-stock rate for baby formula was 43 percent, according to Datasembly, which collected information from more than 11,000 retailers 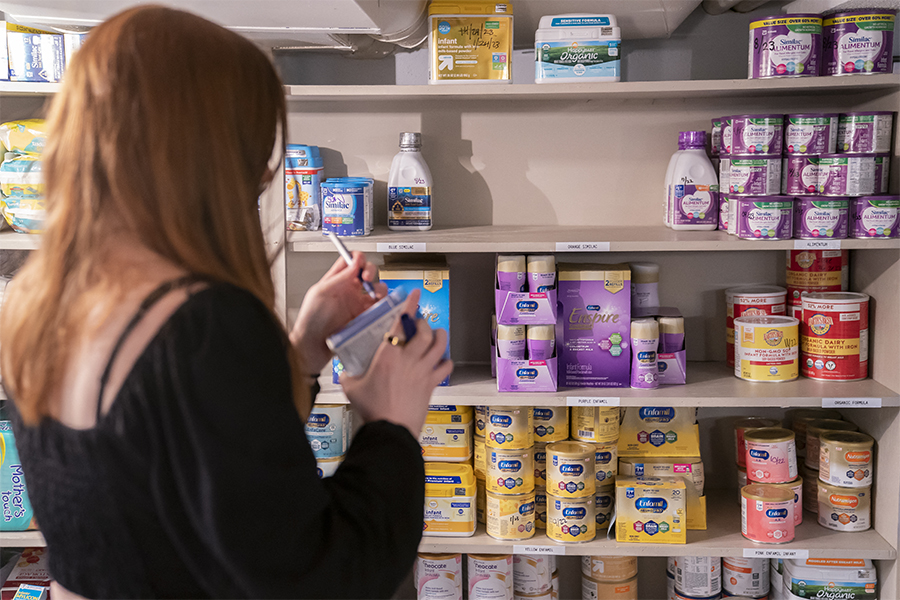 Katie Wussler, a program coordinator at Mother & Child Education Center, checks the lot number on a donated can of Similac baby formula against a list of recalled cans on May 12, 2022 in Portland, Oregon. More than 60 percent of Mother & Childs formula supply was affected by the recall, and like many similar non-profits they are struggling to meet increased demand from mothers who are unable to find or afford formula in stores. (Credits: Nathan Howard/Getty Images/AFP)

Washington, United States: The White House vowed Thursday to take action to boost supplies of baby formula as President Joe Biden was slammed by Republicans for crippling shortages nationwide.
Last week, the average out-of-stock rate for baby formula was 43 percent, according to Datasembly, which collected information from more than 11,000 retailers.
The administration, already under fire over the highest inflation rate in decades, said it was considering increasing imports, as the United States relies on domestic producers for 98 percent of the infant formula it consumes.
Officials say they are also working with the states to cut red tape on poor families buying infant milk through food stamps.
"President Biden has directed the administration to work urgently to ensure that infant formula is safe and available for families across the country... this is work that's been underway for months," White House Press Secretary Jen Psaki told reporters on Thursday.
"Our message to parents is: We hear you, we want to do everything we can, and we’re going to cut every element of red tape to help address this and make it better for you to get formula on the shelves," she added.
Biden has asked the Federal Trade Commission to look into abuses linked to the shortage, including the resale of infant milk online at prices far above normal.
The president met manufacturers and retailers for discussions described as "productive and encouraging" by an administration official, who spoke on condition of anonymity.
However, the official would not say how long it would take for the situation to improve.
The Republican opposition, which has set its sights on wresting back control of Congress in November's midterm elections, has seized on the issue to berate Biden and the Democrats.

Elise Stefanik, part of the House Republican leadership and a new mother herself, told a news conference she had contacted the US Food and Drug Administration in February but received "no substantive response."
"Joe Biden simply has no plan. In fact, when Joe Biden's White House was asked about the shortage, they laughed. Shameful," she told reporters.

Her Republican House colleague Anne Wagner of Missouri said her state was one of six where more than half of the normal supply of baby milk was out of stock.
"I've heard stories of moms first-hand—my own daughter-in-law—bartering for baby formula on Facebook," she said.
"Pregnant women are asking if they should start stockpiling. They're anxious during a time of high stress and anxiety."
Congressman Randy Feenstra said families in his state of Iowa were traveling up to 100 miles to source the formula.
The American Academy of Pediatrics recommends exclusive breastfeeding for about the first six months of a baby's life, and continuing to offer a mix of breast milk and solid food until their first birthday.
But the ability to breastfeed can depend on factors such as the mother's work environment and medical condition. Infant formula is considered a healthy alternative and in practice three quarters of babies are fed with at least some formula by six months.
For some families, formula is the only option. San Diego, California resident Olivia Espinosa Espinosa and her husband Steve Hohman have two young children. One of them, Maya, is only three weeks old and is lactose intolerant.
Espinosa said the shortages have been "extremely frustrating and especially with a newborn, somebody who is requiring... very specific food right now."
The problem has been worsening since February 17 when, after the death of two infants, manufacturer Abbott announced a "voluntary recall" for formula made at its factory in Michigan—including Similac, a brand used by millions of American families.
A subsequent investigation cleared the formula, but production has yet to resume, exacerbating already ongoing scarcity caused by supply chain problems and labor shortages.
"I think we need to take a moment and think about the fact that, in Joe Biden's America, it seems like it's easier to get a crack pipe and a government-funded smoking kit than it is to find baby formula," said congressman Mike Waltz of Florida, a father of a four-month-old.
The false claim that a US government grant program would fund the distribution of crack pipes in smoking kits stems from an inaccurate article published in February. Despite being repeatedly debunked, it continues to be spread by Biden opponents.
© Agence France-Presse