Not just milk: How Country Delight is planning to become a Rs 600 crore brand

From delivering fresh milk to daily essentials, Country Delight is carving out more space in the kitchen. Can the natural foods' brand continue to delight? 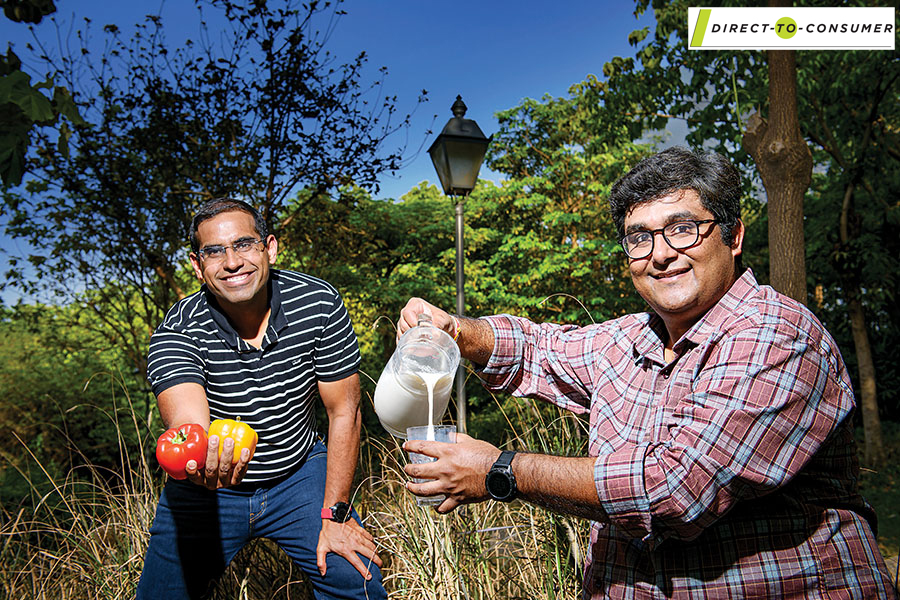 The computer science engineer was quick to process the data. Back in 2011, around 70 lakh litres of milk was consumed in Delhi every day. “Even if you are able to sell 1 lakh litre, it’s a good outcome,” says Chakradhar Gade, who co-founded Country Delight with Nitin Kaushal in 2011, and ran the part-time business of supplying fresh milk in Delhi for two years. The retentive nature of the venture lured the duo to get into the business of milk, which had a long gestation period. But this is exactly what Gade was looking for. “It didn’t make sense to put all your capital in a high-risk, high-return play,” he says, explaining his move to bootstrap the company by pumping in ₹1 crore. When you have a limited pool of capital, he underlines, a business with some sort of built-in safety and predictability makes sense. “Sales predictability was very high in milk,” recounts Gade, who started his career with Infosys and then worked at financial services’ firm Indxx Capital Management.

For the hedge fund analyst, there was another reason for opting for a milky way of life. “When you buy cattle, it multiplies. But when you buy a car, the value depreciates,” says Gade. Though the logic sounded naïve, the idea was simple. Milk production, and customers, will keep growing. The fact that Delhi-NCR was the fortress of giants like Mother Dairy and Amul didn’t deter the Davids. “When you are in your 20s, you think kuch bhi kar sakte hain [you can do anything],” says the IIM grad, who was more than delighted to quit his job in 2013 to live his dream. Youth, he underlines, gives you some level of confidence that you’ll figure it out. A high-quality product with minimal processing, and delivered directly to doorsteps, Gade reasoned, would lead to consumer stickiness.

A year into the business, Gade did find stickiness, though of a different kind. The fledgling milk startup, which had around 100 cattle, was on the verge of being white-washed. “We couldn’t understand how to manage the cattle,” he recounts. The milk production, consequently, dipped as the milk cycle was unpredictable. Moreover, 70 percent of the bootstrapped capital was already burnt. During the initial years, figuring out procurement of milk, fixing last-mile delivery, working on the arithmetic of customer acquisition, integrating supply chain with technology and building scalability became big problems to solve. Though friends and family chipped in with more money, the two young men were getting used to a life outside air-conditioned rooms. The heat was on.

The boiling point, though, came in 2017. After staying bootstrapped for over six years, Gade was out in the market to raise his first round of funding. And the first question from Rehan Yar Khan, managing partner at Orios Venture Partners, stumped the engineer. “What does your brand stand for?” the funder asked. By early 2017, Country Delight had managed to survive and grow at a decent pace, and the business was in mid-single digit crore. It was a difficult question for the co-founder, who hailed from a finance background. “What do you mean?” quipped Gade, who pointed out how the business has grown manifold from ₹75 lakh in FY14. Though the business idea, model and product were clear, the engineer missed out on a crucial data input: A compelling brand proposition.

Six years after raising a seed round, Gade decodes brand Country Delight. “We are a mass premium brand,” he says. Country Delight, he claims, sources produce from a network of farmers within a 200-km radius, and is not too expensive so as to miss out on catering to the belly of the consuming segment of the population in the country. “We deliver fresh, natural and minimally-processed products directly to your doorstep,” he contends. The delight on his face is hard to miss. Khan too is excited to be part of the consumer brand. “It’s a delight to back Country Delight,” says a beaming venture capitalist.

The reason behind the ₹600-crore smiles of the founder and the funder is not difficult to decode, though. From ₹19 crore in operating revenue in FY18, Country Delight jumped three times to log in ₹65 crore in the next fiscal, and pole-vaulted to ₹175 crore in FY20. The rapid pace continued after the pandemic. From ₹321 crore in FY21, the brand is likely to end FY22 at ₹600 crore. Country Delight has reportedly raised ₹498 crore ($65 million) in a Series D round, which is yet to conclude, and counts Matrix, Orios, IIFL, Trifecta Capital and Elevation Capital among its backers.

The heady growth comes on the back of a rising number of users. Working on a subscription model, Country Delight claims to serve over 3 lakh households and fulfils over 5 million orders a month through its 6,000 delivery guys. Though it started with milk, which still forms a chunk of its revenues, Country Delight added more products to its basket, such as bread, bakery, ghee (clarified butter), paneer (cottage cheese), yogurts, and healthy shakes. The brand, Gade informs, has started delivering fresh fruit and vegetables in the Delhi-NCR market, and plans to get into multiple categories such as rice, wheat, pulses, grains, jams and pickles.

Operational across 15 cities such as Delhi, Gurugram, Noida, Bengaluru, Pune, Mumbai, Hyderabad and Chennai, the brand is now aiming to reach a million households over the next few years. “We are no longer just a milk brand. We are a natural foods’ brand,” says Gade.

For the backers, the most exciting part about Country Delight is not revenue but the value proposition. “Unlike most of the internet commerce companies, Country Delight is not a retailer of products,” says Khan of Orios, which backed the company during the seed round of funding in 2017. The brand took a full-stack approach in terms of sourcing, packaging and delivery, and didn’t confine itself as a niche player. “The prices were just 15 to 20 percent more than the big boys such as Amul,” he says, adding that what got him hooked to the company was the taste of the milk, and the unit economics. “It is a very low cash-burn company,” he claims. Though a bunch of investors looked at the company and declined to invest, Khan backed his conviction to the hilt. “We did two rounds of funding in a row,” he says. The Davids, Khan was convinced, had the fire power to take on the Goliaths of the milk industry.

Gade, for his part, reckons that playing a differentiated game helped in taking on the big boys head-on. A differentiated product with a different and independent supply chain and delivery method ensured that the Amuls and the Mother Dairies of the world didn’t notice the new kid on the block. “We were focussed on capturing one household at a time,” he says, adding that no brand was directly reaching out to consumers. “We have largely been a word-of-mouth brand,” he says. The reason for staying bootstrapped, he points out, was largely due to the fact that the business was still evolving. “We were not fully clear about the business model,” he says, adding that one must have clarity before raising money. “Getting clarity with very little money took some time for us,” he says. 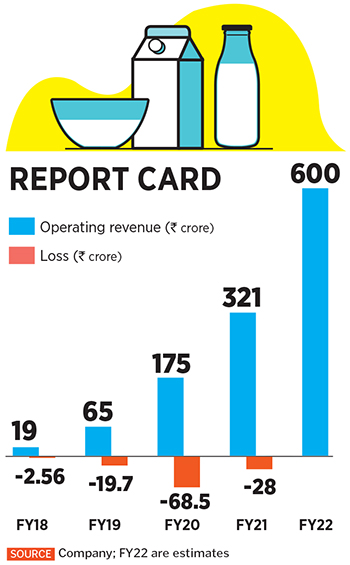 For marketing and branding experts, Country Delight is a classic case of how businesses can be scaled without too much advertising or marketing. “There is a strong pull because of the product,” says Ashita Aggarwal, marketing professor at SP Jain Institute of Management and Research. Just ₹28 crore loss on a revenue of ₹321 crore in FY21 is peanuts when you contrast it with a bunch of consumer startups who have burnt millions in earning peanuts, she points out. The use of ‘IIM alumni’ branding on the milk packs too was a smart move. The business of milk, she underlines, needs loads of trust, which can’t be built overnight. The ‘IIM alumni’ gig played a role in making consumers try the product. “For a brand with skeletal marketing spend, consumer trial is the most important thing,” she says. The consumers might have been curious about the branding, but the stickiness came because of the product and not the IIM branding, she adds.

Gade, for his part, reckons that staying transparent with consumers helped. The brand gave milk-testing kits to consumers to check adulteration. “When you have a good product, it does the job,” he says. The challenge for the brand now, he points out, is to keep growing and enter new categories. “We are an honest brand, we will always stay that way,” he adds.

Update on May 25, 2022: Country Delight, a D2C food essentials brand, has raised $108 million in a Series D round of funding led by Venturi Partners and Temasek.  SWC Global and Trifecta Capital along with existing investors such as IIFL Asset Management, Elevation Capital, Orios Venture Partners and Matrix Partners India also participated. So far the company has raised $147 million.

Tweets by @forbesindia
Amazon gets $98,000-a-day fine over 'abusive' contracts
Biden's biofuel: Cheaper at the pump, but high environmental cost