Bootstrapped success making 'Noise' in a deeply-funded world. Will it get louder?

In a market dominated by deeply-funded players like boAt, smartphone biggies such as Samsung, Xiaomi and Vivo, and a clutch of aggressive homegrown players like Fire-Boltt, remaining bootstrapped might be a baggage as the biggest wearables brand gets ready to undertake the 1 to 10 journey 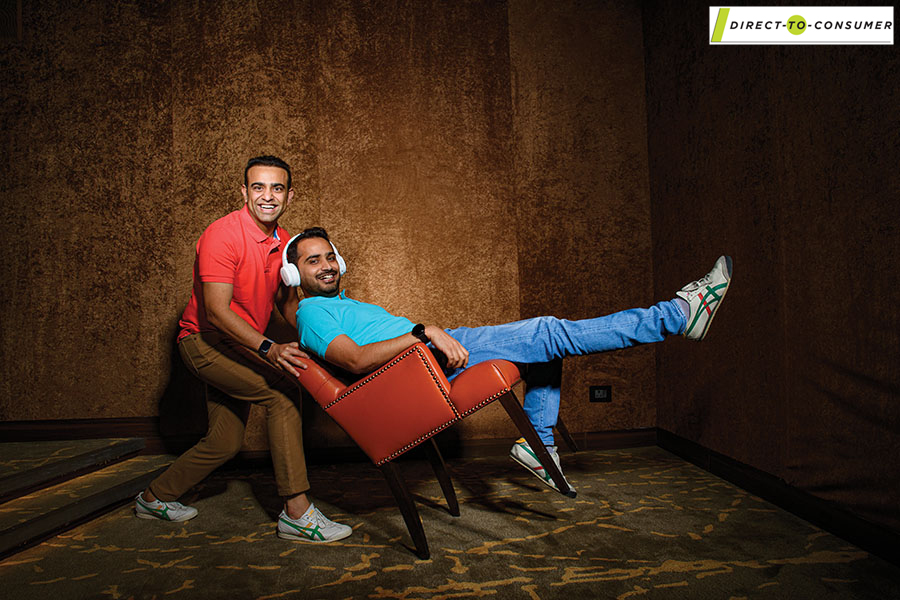 The 0 to 1 journey happened at a fast clip. Amit Khatri and his younger cousin Gaurav Khatri started Noise in December 2014. A graduate from the National Institute of Fashion Technology, Amit spent a few years at an export house that made apparel for global fashion brands such as Zara and H&M. His next move was to set up a design product house in Hong Kong where he collaborated with fashion labels. He ran the business profitably till 2014, but the 33-year-old wanted to get out of the backend part of the business.
The same year, Gaurav, a commercial pilot, was fed up navigating turbulence in the aviation sector. In 2012, Kingfisher Airlines shut operations, there was uncertainty in the market, and the 23-year-old lost his appetite to fly. The brothers came together, rolled out Noise, and started selling mobile accessories and covers. “In two years, Noise became the biggest accessories player,” claims Amit. “That was our zero to one journey.”

In 2017, the duo was back to the 0 to 1 journey. Amit explains what went wrong. “There was business, but there was no brand,” he says. The company had clocked little over ₹ 24 crore in sales, was bootstrapped and profitable. But while sales were rising, the average selling price (ASP) of mobile covers and accessories was dropping at an alarming pace. Additionally, there was a problem of a highly unorganised market and the nature of the product as mobile cases remained a commodity. “While we were selling more, our topline had stagnated for a year or so,” informs Amit.

By the end of 2017, the duo exited the accessories business, which was not easy. “It was a tough call. That category made us. We were again starting from zero,” says Gaurav. The hunt now was for a segment where the entry barriers were high, and a brand could be built. They found the answer in TWS (true wireless stereo). India was in the early phase of the smartphone boom, and wireless audible products were the need of the hour. The brothers decided to play in the premium segment.
Noise rolled out TWS products, and there was a healthy demand. But soon, there was a twist in the tale. Aggressive pricing by rivals made the brothers realise that though they had started building a brand, they were yet to get their pricing right. “You can’t be aspirational for the niche. It has to be a premium-but-mass play,” says Amit. Noise stayed muted in the TWS category, and with the new learnings, rolled out smartwatches.
Since then, there was no looking back. Sales grew at a brisk pace. From ₹ 42 crore in FY19, the revenue from operations jumped to ₹ 156 crore in FY20 and closed the next fiscal at ₹ 373 crore. For the bootstrapped brand, there was decent growth in PAT (profit after tax) as well—₹ 1.81 crore, ₹ 18.4 crore and ₹ 32.89 crore, respectively. The upward curve was also due to the fact that the Indian market for wearables exploded over the last two years. While in 2020, the country sold 2.63 million units of smartwatches, the numbers pole-vaulted over four times to 12.23 million in 2021.
In fact, during the last quarter of 2021—October to December—wearable watches in India maintained a triple-digit growth as vendors shipped 4.9 million units, growing by 271.2 percent year-over-year, according to data by IDC. The reasons are obvious. Aggressive discounts, strong marketing promotions, and multiple launches pushed the segment. Interestingly, Indian brands accounted for three-fourth of the overall market, and doubled their share from the previous year.
Noise, too, took pole position in the wearables segment. The market share increased from 24.6 percent in 2020 to 27 percent in 2021, making it the biggest in the segment (see box). In fact, it has maintained top position for seven quarters in a row. Last year, Noise pipped Samsung to take the third spot in TWS, and emerged as the fastest-growing brand, according to IDC. “We have just scratched the surface. It’s still day one,” says Amit, adding that close to 15 percent of the business is offline and the rest comes from online channels.
Noise, say industry analysts, got its timing right. “They were at the right time when the smartphone boom was happening, and building a brand was a big plus,” says Navkendar Singh, research director (client devices), IDC India. A sharp focus on design, colours, quality and affordability provided the right ingredients for growth at a faster clip. A part of the credit for their success, he maintains, must also be given to online marketplaces like Flipkart and Amazon that went ballistic post-pandemic in pushing smartphones, wearables and hearable products.

It also helped that smartwatches started cannabalising wrist bands, as the market tumbled from 3.35 million units in 2020 to 2.21 million units in 2021. In fact, the fourth quarter of the last year was the eighth consecutive quarter of annual decline for wrist bands. Noise was quick to not only load its watches with features available in the band, but also play at the right price point. “Staying bootstrapped and maintaining a lead for so long is quite an underappreciated thing in this industry,” reckons Singh. “It has been a phenomenal growth story.” 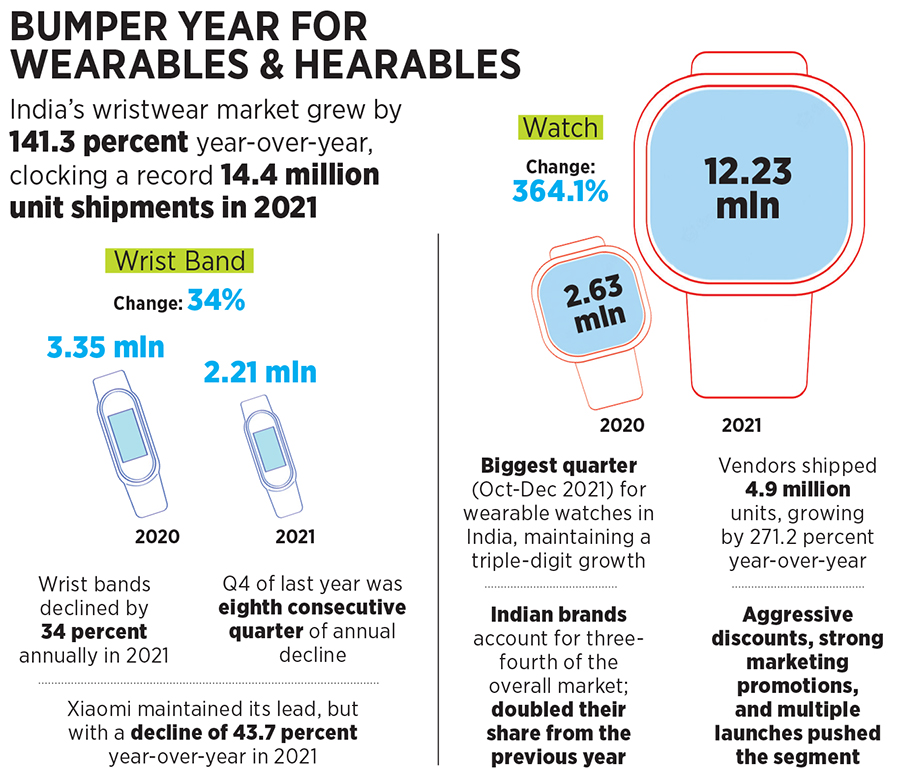 But is Noise missing the big story? In a market dominated by deeply-funded players like boAt, smartphone biggies such as Samsung, Xiaomi and Vivo, and a clutch of aggressive homegrown players like Fire-Boltt, remaining bootstrapped might be a baggage as the biggest wearables brand gets ready to undertake the 1 to 10 journey. The competitive decibel has risen by multiple notches. Let us look at how the rivals are snapping at the heels of Noise in the watch category. boAt, which had a paltry 2.8 percent share in 2020, has raced to a staggering 25.1 percent in 2021. Then there is Fire-Boltt, whose market share has increased from 0.3 percent to 11.5 percent during the same period. In contrast, Noise inched from 24.6 percent to 27 percent. The throne might be in danger.

Sumit Keshan, managing partner at Wipro Consumer Care Ventures, explains why it is hard to continue with a bootstrapped journey beyond a point in the consumer businesses. Though it helps during the initial phase of the journey in terms of inculcating fiscal discipline, it has its limit. “You need marketing dollars to grow aggressively,” he says. In consumer businesses, unlike IT or SaaS ventures, brand-building plays a critical role in ensuring long-term growth.

The funders, too, wonder about the long-term strategy of not raising external money. “You just do not want to stay in the game. You have to be in the game to lead the game,” says Anil Joshi, founder of Unicorn India Ventures. Noise, he underlines, scores poorly when it comes to visibility. Though it is a digital-native brand, much like what Xiaomi was when it started, at some point, you need to amplify your presence, reach and visibility to take on rivals and maintain the gap. Even Apple and Samsung, the two biggest smartphone brands in the world, have to aggressively advertise to reach out to consumers. “Their next phase has to see some fund infusion,” he says.
Last month, there were media reports that Tata-controlled brand Titan was in talks to buy a majority stake in Noise. Titan did not reply to an email sent by Forbes India. The founders, though, claim they have never been in sell-out talks. “We don’t have any intention to sell,” says Amit. For Noise, he adds, frugality and being bootstrapped has become a part of their DNA. “We are focussed on building for the future,” says Gaurav, explaining why they never felt the need to raise external capital. Noise, he claims, has been profitable from the first year. “We never felt the need,” he says. He is, however, quick to add that the brand is not averse to raising money to fuel its growth. “The potential partners must have the right vision,” he adds.
What about the other challenge of relying on third-party manufacturers? Most of the players in the category, including boAt, have grown on the back of contract manufacturers, who are mostly based out of China and Taiwan. The brothers maintain that they have a firm control over design, R&D and supply. Working with global players, Amit underlines, is the norm in the industry globally. “Look at Apple. It doesn’t manufacture,” says Gaurav, adding that Noise would explore the options whenever the manufacturing ecosystem matures in the country. “One out of four watches in India is a Noise watch,” he claims, adding that globally too, Noise is among the top 10 players. The plan ahead, he stresses, is to make more noise, and keep growing.