The boAt cofounders have transformed the brand into a formidable brand that is cruising at an astonishing pace. What next for the homegrown consumer electronics giant? 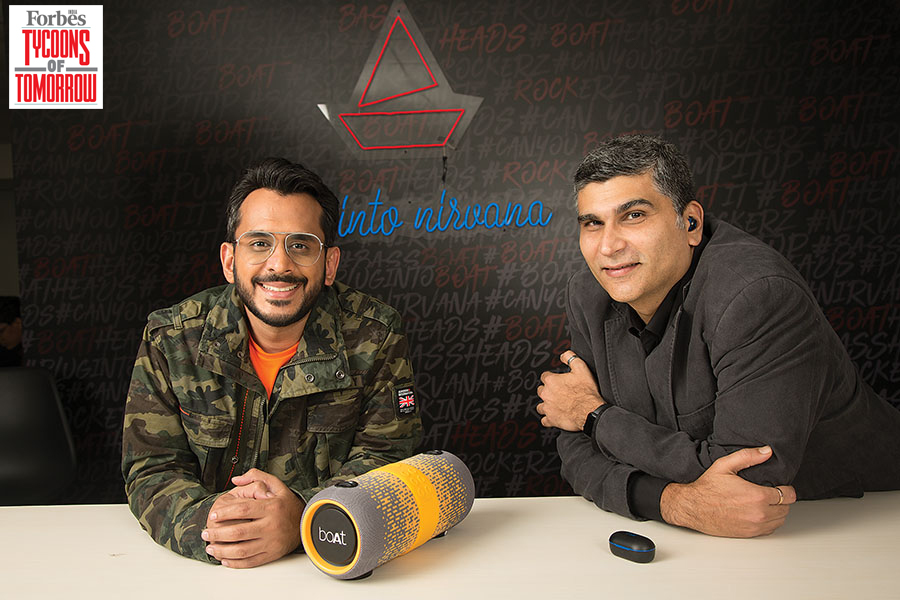 Aman Gupta (left) and Sameer Mehta, co-founders, boAt, say that they are not in the valuation game
Image: Emmanual Karbhari for Forbes India

What is the most important thing to keep in mind while building a boat? While most rookies would focus on strength, stability and aesthetics, Aman Gupta knew the silver bullet. A boat, he stresses, must not leak. “We believe in earning money and not burning money,” says the co-founder of boAt, India’s biggest homegrown consumer electronics brand. “We are perhaps the first direct-to-consumer brand to cross ₹1,000 crore in sales, and remain profitable from the first year.”

Gupta’s boAt has cruised at an astonishing speed. From ₹31 crore in FY17 to over ₹1,000 crore in FY21, to planning for an IPO early next year, boAt has grown at a furious pace. From hearables to begin with, the company recently entered into wearables and has quickly become the second biggest in the category by logging 23.1 percent market share in the third quarter, according to market research firm International Data Corporation (IDC). In terms of funding, it raised money from Qualcomm Ventures, the investment arm of Qualcomm, in April, just three months after raising close to $100 million from an affiliate of Warburg Pincus.

In earwear, the company has cornered an overwhelming 48 percent market share. The extent of domination becomes clear when it is contrasted with the pecking order of South Korean electronics giant Samsung, which came fourth with a 5.3 percent share. Though boAt has morphed into a giant ship over the last few years, the thumb rule has remained unchanged: “Business must make profit,” says Gupta, 40. 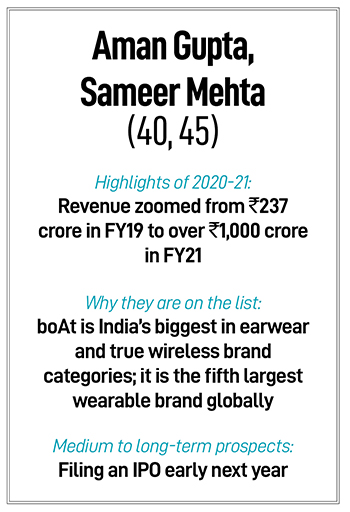 Tell him that public market values profitable companies, and Gupta reckons that even loss-making companies stand a chance. “I still feel there is value in companies like Zomato.” The problem, he explains, arises when the companies getting listed do not have a clear business model. This is probably what happened to a few companies recently. “Investors can push for an IPO, but you cannot fool consumers,” he says. “Public sab jaanti hai (public knows it all).”

Back in November 2016, when Gupta started boAt with Sameer Mehta, the duo just knew two things. First was to disrupt the consumer electronics segment, starting with hearables. Second was to post profit from the first year. “We make money by selling to consumers and not selling shares to investors,” Gupta says, adding that the co-founders own a majority in the company and have run a tight ship. “We are frugal, capital efficient and have not wasted money,” he says.

Can tycoons be frugal? According to Gupta, new-age tycoons are self-made, they both disrupt and dominate the industry, and believe in creating businesses with scale and impact. “We are not in the valuation game,” he underlines. The company, Gupta lets on, is building immense value for consumers, shareholders, and the boAt team. “This is what we value,” he says.

Tweets by @forbesindia
Forbes India 2021 rewind: Best books we read
How a Luddite approach might hurt ecommerce in India