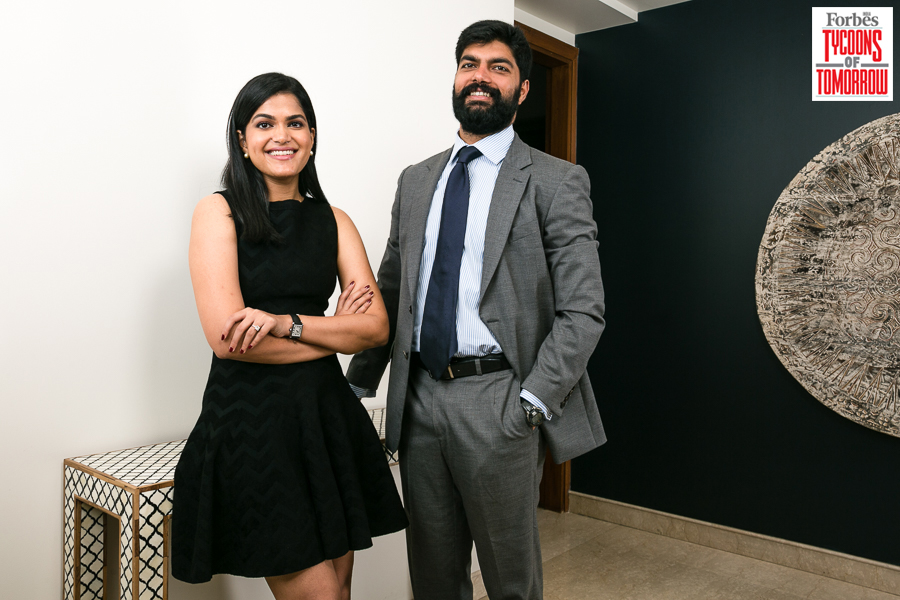 Around 2012, when Adwaita Nayar was graduating from Yale University, her mother, Falguni Nayar, was looking at foraying into entrepreneurship with Nykaa. From researching what kind of business Nayar could set up to setting up the wireframes sitting in her bedroom, Adwaita has seen all the initial struggles.

In tough times, unlike her mother who had a lot more experience, Adwaita found it difficult to remain thick-skinned. “Back then, I was so young… I realised entrepreneurship is so hard and such a roller-coaster—there are so many highs and lows,” she says.

After working at Nykaa for a few months, she took up a job at Bain & Company in New York as an associate consultant for a year. However, she quit that and rejoined Nykaa.

The company website had just launched and there were barely five or six people in the team. Every tiny step, including raising funds, was a struggle in those days. “We would go fundraising, and investor after investor would say ‘No, we don’t believe in the beauty market, it’s not large enough’. In 2012-13, one could not have envisioned the outcome today,” says Adwaita, who spent about two-and-a-half years at Nykaa before pursuing her MBA at Harvard Business School.

Two years later, in 2017, she came back to Nykaa as head of retail business.

From the beginning, Nykaa saw a good mix of young and experienced professionals—one of the reasons why it was one of the first companies to bet big on educating customers via digital marketing. Adwaita says, “Our generation lived on social media, so we intuitively understood the power of social media and digital.”

Initially, Adwaita was heading retail, for which she spent a lot of time travelling across tier 2 and 3 cities, and she strongly believes that some of her strongest customer insights came from those years of travelling. “After years of interacting with customers, the strongest consumer insight I got is that Indian women are here to demand quality experiences,” says Adwaita, who is co-founder of Nykaa and CEO of Nykaa Fashion. 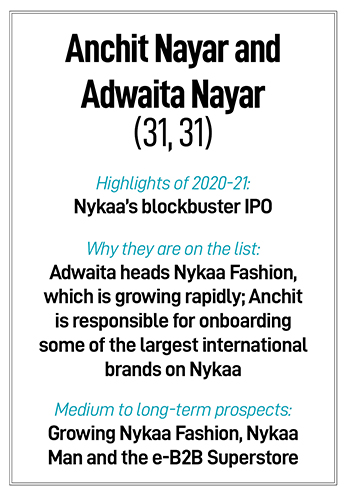 Her twin brother Anchit moved back to India after spending close to seven years in the media and telecom banking, high yield, and equities departments at Morgan Stanley, New York. Around 2018, he joined Nykaa to run the retail side of the business. At a time when online was booming, Adwaita had started the offline business by setting up close to 20 stores across India. Anchit took over the retail business then, and grew it to 60 to 70 stores in about two years.

“FN [Falguni Nayar] always wanted us [Adwaita and me] to join the retail business first because of how challenging it is... if you just do ecommerce, you do not meet the customer base, and our success depends entirely on what the consumer thinks,” explains Anchit.

But understanding the beauty segment in itself was a learning experience for him. “For hours I used to sit in this conference room and I’ve swatched lipsticks on my hand… I can tell you all about eye shadows and foundations, and toning and moisturising. If you’re in this business, you have to learn everything,” says Anchit, who also likes being in the loop about brand partners, apart from understanding products and the market.

Onboarding brand partners is a different ball game altogether. When it comes to a number of international brands, Anchit says, “We have a very active team that goes out there to source these brands. We build these relationships over time, because for them bringing their brands to India is a risky bet.”

Big brands like Huda Beauty and Charlotte Tilbury are currently selling on Nykaa without having a single employee in India. “We manage everything for them—from imports and pricing, to storing in warehouses and marketing,” says Anchit, who is chairman and CEO, Beauty Ecommerce. Earlier, it was only the legacy brands in the beauty and personal care space that people knew about. That has changed. “Nykaa has democratised access not only for consumers but also for brands,” he adds.

“Both Anchit and Adwaita are determined and humble. They have been focussed on sustainable growth and building partnerships,” says Rohan Vaziralli, general manager, Estée Lauder Companies. “Online acceleration was part of our strategic plan. We launched MAC, Clinique and Estée Lauder with Nykaa in 2016 as it gave us reach to over 500 towns and cities versus brick-and-mortar being restricted to mall development in primarily tier 1 and some tier 2 cities.”

In 2017, they launched Nykaa Fashion, given that the size of the fashion market was 5 to 6x that of beauty. “Mom often comes to me with a glint in her eyes, saying, ‘Let us look at a new business’,” recalls Adwaita. This happened first when they moved from online beauty to offline retail stores and then with fashion. “I am just put at the end of starting new things,” laughs Adwaita. Looking back, she feels it was one of the best strategic moves that Nykaa made.

Setting up Nykaa Fashion and growing it every day, says Adwaita, is a humbling experience. “Just because you are good at beauty doesn’t automatically give you a right to succeed. You have to fight really hard,” she reckons.

Like their parents (father Sanjay is KKR India CEO), both Anchit and Adwaita took up jobs as professionals first before joining Nykaa.
“Consulting does help you learn how to communicate, and it lends a structured approach to problem-solving,” says Adwaita.

She picked up three key values from Bain & Company, which she has implemented at Nykaa: Never let a co-worker fail; don’t complain about problems and instead try to suggest solutions and always have zero-defect work.

For Anchit, working at Morgan Stanley taught him a lot about good work ethics and discipline. “It taught me patience, hard work, being diligent, attention to detail—the tiniest error in analysis can have big repercussions—and people skills,” he says.

Nykaa is betting big on the rapidly expanding e-B2B space with its ‘Superstore’, which was launched in Q2FY22. This looks at small retailers who sell multi-brand products and deal with multiple distributors.

“Now all shopkeepers get access to all brands sitting on our platform at wholesale prices—the assortment they get is massive and they can place orders online, based on the ratings and reviews customers give,” says Anchit.

Once shopkeepers place an order, the supply chain is taken care of by Nykaa and products are delivered to them.

“I try to lead with equal measure of a soft heart, but a strong mind,” says Adwaita about her leadership mantra. “I try not to ask people to do something that I wouldn’t do or have done myself,” adds Anchit.

In terms of learnings from their mother, one of the biggest takeaways for the siblings is thinking of a business from a long-term point of view. On a personal front, Adwaita says, “She once told me, it’s okay to be average; you don’t have to be the best all the time.”

Sitting at the dinner table with two accomplished parents can be intimidating.

But Anchit says, “Since we were young, we’ve seen how hard our parents have worked. Both of them have taught us that you have to enjoy what you do, because then it doesn’t feel like work.”

The siblings hope to see Nykaa turn into a household brand. But will the startup bug bite them in the next few years?

Both say in unison: “No, we love Nykaa and what we do, so we’re not going anywhere.”

Tweets by @forbesindia
Best of 2021 Ep. 3: Mike Cannon-Brookes on the workplace after the pandemic and growth at Atlassian India
Forbes India 2021 rewind: Best books we read