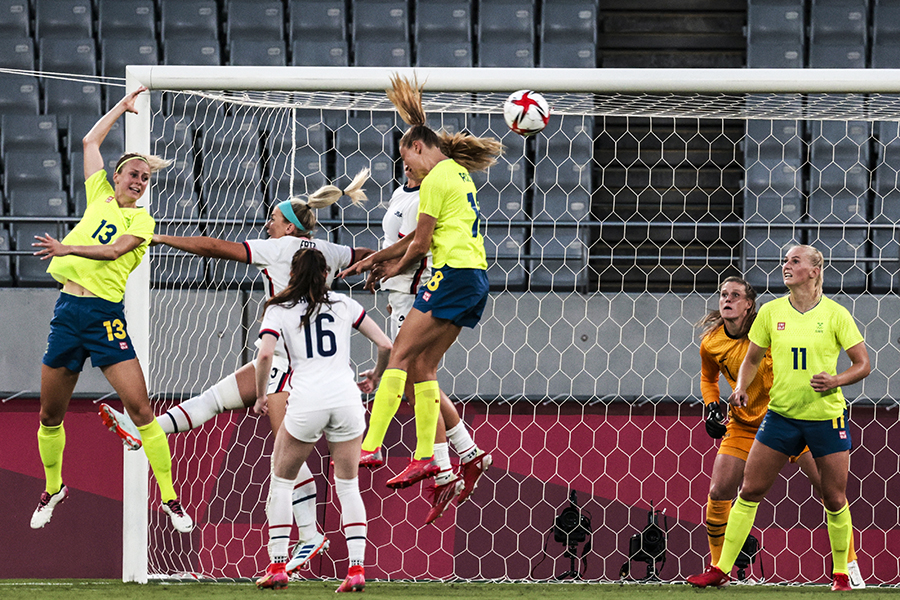 Sweden, in yellow, scores a goal against the United States during their Group G soccer match at the postponed 2020 Tokyo Olympics in Tokyo on Wednesday, July 21, 2021. Of the nearly 11,000 athletes arriving in Tokyo, 49 percent will be women, according to the IOC. Image: Alexandra Garcia/The New York Times

TOKYO — For the first time since the founding of the modern Olympics 125 years ago, the Games have nearly reached gender parity.
Of the nearly 11,000 athletes arriving in Tokyo, almost 49% will be women, according to the International Olympic Committee, up from 45.6% at the 2016 Rio de Janeiro Games and 44.2% at the 2012 London Olympics. (The IOC does not have data on the number of nonbinary athletes at these Games.)
Many countries credit the strides to broad policy changes, increased funding and promotion of female athletes in mainstream media. But for other nations, equality is far off: Men enjoy far more funding, news coverage and opportunities than their female counterparts.
Even as gains are made on the field of play, the makeup of the overwhelmingly male IOC remains behind. Women make up 33.3% of its executive board; and 37.5% of committee members are female.
The organization in recent months has wrestled with a series of gender-related blunders on the public stage. Most recently, on Wednesday, John Coates, an IOC vice president, had a tense exchange with Annastacia Palaszczuk, the premier of Queensland, Australia. He ordered her to attend the opening ceremony, despite her having said she would not do so.
“You are going to the opening ceremony,” he said sternly, crossing his arms.
While the committee has lauded an initiative it began to promote gender equality, Olympic athletes who are new mothers have complained about COVID-related restrictions in Tokyo that prohibit them from bringing their babies to the Games, a challenge for those nursing their young children.
The IOC reversed its decision at the end of June, allowing nursing mothers to bring their infants. Some athletes, including Spanish swimmer Ona Carbonell, said the restrictions in place made accommodations impractical.
The president of the Tokyo Olympics Organizing Committee was replaced this year after he publicly suggested that women speak too much in meetings. In March, the creative director for the opening ceremony stepped down after it was discovered that he had made insulting remarks about the physical appearance of Naomi Watanabe, a plus-size fashion designer.
Still, there has been steady, if uneven, progress in the gender representation of athletes.
“When you have policies and resources that are dedicated to girls and women in sports, you get an equal number and high performances,” said Nicole M. LaVoi, director of the Tucker Center for Research on Girls and Women in Sport at the University of Minnesota. “Evidently, many nations have found this very challenging.”
Consider the starting point.
The founder of the IOC, Baron Pierre de Coubertin, barred women from competing in the inaugural 1896 Games. In 1900, 22 women were welcomed to compete in five ladies’ sports — croquet among them — while 975 men competed in everything from athletics to rowing.
Women did not make up more than 10% of participants until 1952; that ratio has crept up since then. Women were not allowed to compete in every sport until 2012, and it was not until 2014 that the IOC’s planning agenda included working “to achieve 50% female participation in the Olympic Games.”
Before the opening ceremony Friday, many countries — including the United States, Australia, Britain, Canada and China — have announced team lineups that had more women than men.
Numbers aside, men still hold an advantage in the competition for the most advantageous slots for their races, matches and television time. Nevertheless, the organizing committee continues to make symbolic gestures pointing to equality.
For the first time, the IOC has encouraged each participating country to nominate one man and one woman to be flag bearers in the opening ceremony. For some, such as China and Mongolia, that means a woman will be a flag bearer for the first time.
These Games will also include the debut of new sports: baseball, softball, karate, skateboarding, sports climbing and surfing. They all have men’s and women’s competitions, funneling new kinds of athletic talent to the Olympics. More mixed-gender events — 18 in total — will be held, with the highest profile of those in track and swimming relays. There will also be a mixed triathlon relay, a mixed doubles event in table tennis and mixed events in judo, archery and shooting.
Still, some events continue to exclude women. The Olympic decathlon — a series of 10 track and field events — is for only men. Jordan Gray, the U.S. record-holder in the women’s decathlon in world track, is leading a campaign to have the event added to the Games in time for 2024. The 50-kilometer race walk is also offered as an Olympic event for only men.
Despite and because of it all, the biggest American stars of the Games may be women. Two of them are swimmer Katie Ledecky and gymnast Simone Biles, returning medalists and fan favorites.
“The punchline here is that you see women in some countries — mostly white, Westernized countries — really outperforming their male teammates, despite the fact that they get less resources, less support, less viability, less whatever else,” LaVoi said.
“Despite that, they are still outperforming the men,” she added, pointing to the enduring star power of female athletes like Biles. “That’s kind of amazing.”

Tweets by @forbesindia
Photo of the day: It's raining, it's pouring, the old man is snoring
Make happiness your gold medal: Abhinav Bindra