Is it time for RBI to exit a loose monetary policy and raise interest rates?

Inflation raises its ugly head
If inflation policy is a guide to interest rate policy, India and Korea are likely to be the first nations to raise interest rates in Asia. Inflation levels are higher than interest rates in both countries. According to Macquarie Research, real interest rate is minus 7.14 percent in India and for Korea it is 0.16 percent. Kaushal Sampat, COO, Dun & Bradstreet says, “D&B expects that RBI may increase the CRR [cash reserve ratio] by 50 basis points by the end of the current fiscal. This may happen in two phases — a 25 basis points hike by the end of December 2009 and another 25 basis points by end of March 2010.”
Factories are working; optimism is higher

Factory output is at a 22-month high. The D&B Composite Business Optimism Index is up at 143.2 for the fourth quarter of 2008-09. For the earlier quarter the index was at 132.1. The 8.4 percent rise in the index shows that corporate India is expecting better business coming in for this quarter. Already, the results that have come in have exceeded expectations across most sectors and the stock market resurgence has shown no signs of coming to a halt. Can the RBI afford to take a risk and extinguish the animal spirits by raising interest rates?
Australia, anyone?
Australia has raised interest rates for the first time after July last year. It is the first developed economy to do so by raising the overnight cash rate by a quarter of a percentage point to 3.25 percent. The Australian central bank’s governor feels that forecasts for confidence measures are revised higher and growth in 2010 will follow the trend.
Uncle Sam is still keeping it down
The US dollar is down by 10 percent over the last six months on a trade weighted basis. There are many who feel that the US dollar needs to be propped up and for that reason interest rates need to go up. But the Americans may not increase interest rates as they feel it will affect the economic stimulus. On September 23, the Federal Reserve said that the American economy had “picked up” but that interest rates were set to remain “exceptionally low”. The developed world will follow the US. 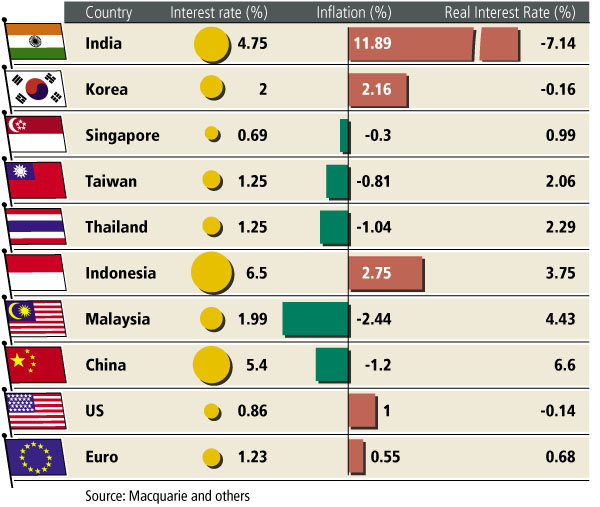 Rupee flexing its muscles
The rupee is volatile and is trading at Rs. 47 against the dollar, a rise of 3.7 percent against the dollar over the last one month. Maybe the market expects a rate hike. Ajay Shah, an economist writing in Financial Express, states that “…whenever the US dollar loses ground, interest rates in India tend to go down, and whenever the US dollar gains ground, interest rates in India tend to go up”. The US dollar has lost ground as of now.
Finally, Mr. Finance Minister…
“The RBI should not compromise on the nation’s growth to take care of inflation,” said finance minister Pranab Mukherjee on a TV channel. From October 2008 to April 2009, RBI has lowered interest six times and has brought down the reverse repo rate at 3.25 percent. Mukherjee further added that over the past it has been noticed that companies can absorb a reasonable increase in interest rate.

(This story appears in the 06 November, 2009 issue of Forbes India. To visit our Archives, click here.)

Tweets by @forbesindia
Runaway Train
No Country For Old Men