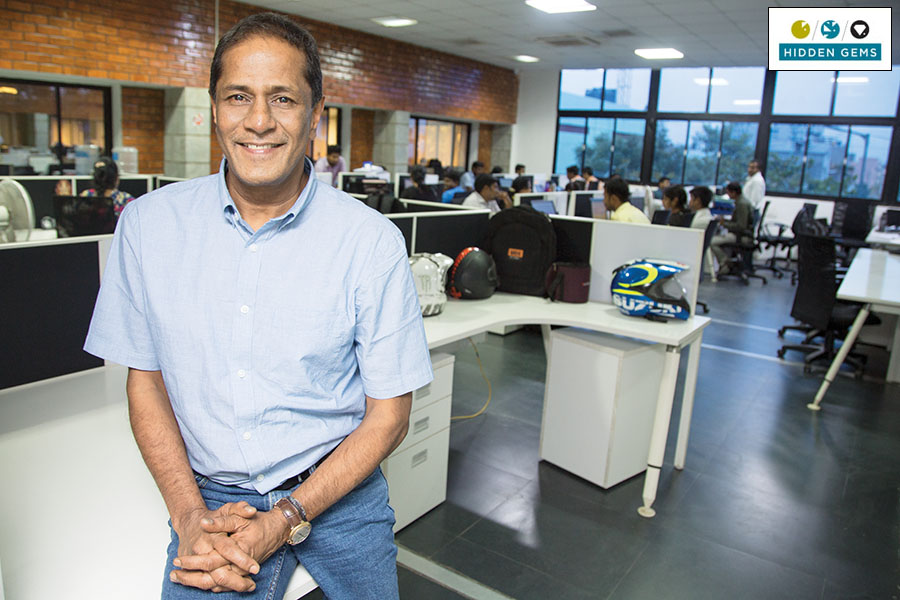 When T Raghunandana started UDS, the term ‘facilities management’ was known only in the West; Image: P Ravikumar for Forbes India

Finding a reliable domestic help, an electrician on time or a plumber at short notice are problems one deals with on a regular basis.

Since its inception in 1985, UDS has professionalised a slew of blue-collar jobs, from plumbing to housekeeping. Its 50,000 employees offer services to 1,000 clients, including IT major Infosys, across industries. They are not only skilled and guaranteed a monthly income but also get access to benefits like insurance services and a provident fund. 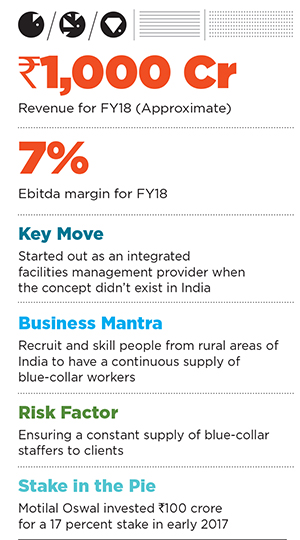 Typically, the UDS team is responsible for the management of electrical and air-conditioning operations, water management (supply quality, pressure, RO plant, effluent treatment plants, sewage treatment plants and maintenance), front office, mail room, vending and pantry, and in the overall upkeep of a facility. The company does not provide security services since large corporates mostly prefer a security agency.

Raghunandana may have built a multi-million dollar business today, but things were different when he started UDS over three decades ago. “In those days, there were lots of people without jobs. All you needed to do was pick them up and train them. Today, everybody’s expectations and aspirations have become bigger,” says Raghunandana, managing director, UDS. “It’s tough to find cleaning staff—they just don’t want to wash your bathrooms. You pay a driver more than an engineer,” he adds to reinforce the paucity of such workers.

Born and brought up in Chennai, Raghunandana completed his schooling from Asan Memorial Senior Secondary School and earned a bachelor’s degree in commerce from Guru Nanak College in the city. His father was an art director in the local film industry.

Raghunandana showed his entrepreneurial streak soon after stepping out of college in 1982. He established a mechanised brick kiln at Arakkonam, about 80 kilometres from Chennai, after securing a “graduate loan” from a public sector bank. “Banks used to issue loans for new entrepreneurs and one did not have to provide any collaterals; you could get up to ₹40 lakh,” recalls Raghunandana. “Today, there is so much startup activity but there isn’t such a scheme.”

The idea to start a mechanised brick kiln was a no-brainer for Raghunandana. “A brick [business] is not high technology. It’s capital intensive; as long as you have good demand, it’s profitable,” he explains. The Chennai resident found a captive client in the Indian Navy which had then just established the Arakkonam Naval Air Station or INS Rajali. But in order to scale, “you needed more and more such naval stations”, he says. 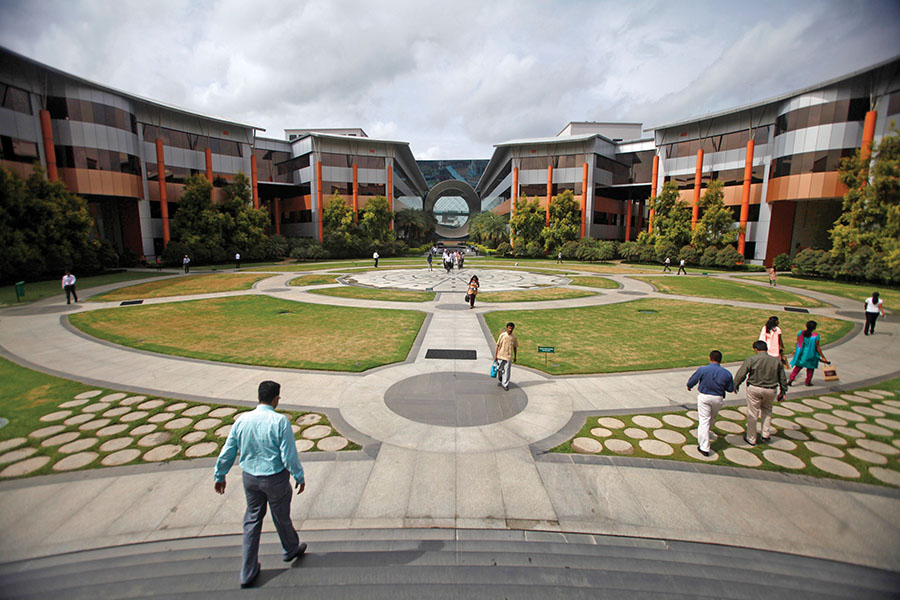 The Infosys campus in Electronic City, Bengaluru. UDS handles about 75% of Infosys’s facilities management
Image: Vivek Prakash / Reuters
After three years, Raghunandana decided to quit manufacturing bricks and start a business that could be scaled without having to worry about investing large sums of capital. The services sector seemed to be the right choice.

“There was no such thing called facilities management in those days. You had large public sector companies giving out piecemeal contracts, either for plumbing or air-conditioning services. It [facilities management] was a concept that existed in the West,” Raghunandana tells Forbes India.
Over 30 years since then, the term facilities management has become common among corporates in India, which boasts approximately 2 billion square feet of serviceable space including big infrastructure projects.

And that gives UDS considerable scope to build its business. “Quess is the only other sizeable Indian player, but it is more into staffing and tech-staffing. [France-based] Sodexo and the Danish ISS (Integrated Service Solutions) are the multinational players who have been around [in India] for long, but haven’t been able to scale up,” says Vijay Dhanuka, senior vice president, Motilal Oswal Private Equity. In early 2017, the Mumbai-based private equity firm invested ₹100 crore in UDS for a 17 percent stake.

Apart from Infosys, UDS counts Hyundai and Saint-Gobain among its big clients. “We handle about 75 percent of Infosys’s facilities management business, [though] we don’t work at their offices in Pune and Bhubaneswar,” says Raghunandana.

The company also handles the engineering services—air-conditioning, power and power back-up—at the airports in Bengaluru and New Delhi, and cleaning services at the Chennai, Hyderabad and Goa airports. Chennai Metro and Hyderabad Metro are also its notable clients.

UDS employees provide facilities management services across 180 million square feet of space across the country, according to the company. In FY18, it reported revenues of about ₹1,000 crore and had an Ebitda margin of about 7 percent. Raghunandana claims the company reported a 20 percent-plus compound annual growth rate since 1999, when it signed on big corporate clients like Hyundai and Chennai’s Tidel Park—a 1.2 million square feet information technology park.

“He [Raghunandana] is highly focussed and energetic,” says Dhanuka, who’s on the board of UDS. “He has a vision to make it big in this business.” This, despite the challenges that come along.

According to Raghunandana, the urban poor in India aren’t willing to clean toilets or drive cars. “They simply don’t want to do those kinds of jobs. Today, a good driver will charge anywhere between ₹18,000 and ₹20,000 per month. The ones who get paid ₹13,000-14,000 have just one year of experience and will bash your car. But you can get a good engineer, who has passed out from a B or C grade college, for ₹14,000 per month,” says Raghunandana.

To ensure a constant flow of employable personnel, Raghunandana is hiring unskilled labour from rural India and skilling them at an in-house training academy in Chennai. Started this year, it can train about 1,200 people annually in various aspects of facilities management.

Raghunandana is also trying to overcome the labour shortage by diversifying his business and acquiring companies in adjacent streams. For example, UDS acquired Avon Solutions, a mail room management company which boasts of clients such as Microsoft and Citibank. It also bought Fusion Foods, a Chennai-based industrial caterer which has revenues of about ₹60 crore, and Stanworth, a boutique facilities management company that focuses only on 5-star hotels.

“We are looking at landscaping, pest control, industrial cleaning, and energy management (sourcing and maintaining assets such as chillers, boilers, and gensets),” says Raghunandana. “We will also look at security services and will likely keep it a separate company.” He has also joined the ecommerce bandwagon with the soft launch of zappy.in, an online B2C platform of on-demand services. “The only difference between us and an UrbanClap is that they are an aggregator whereas our supply [of services] is in-house. We have control over quality and most importantly security. We know the people who are going to your house,” adds Raghunandana.

All this is just a sign of bigger things to come as he prepares UDS for a public listing in 2020.