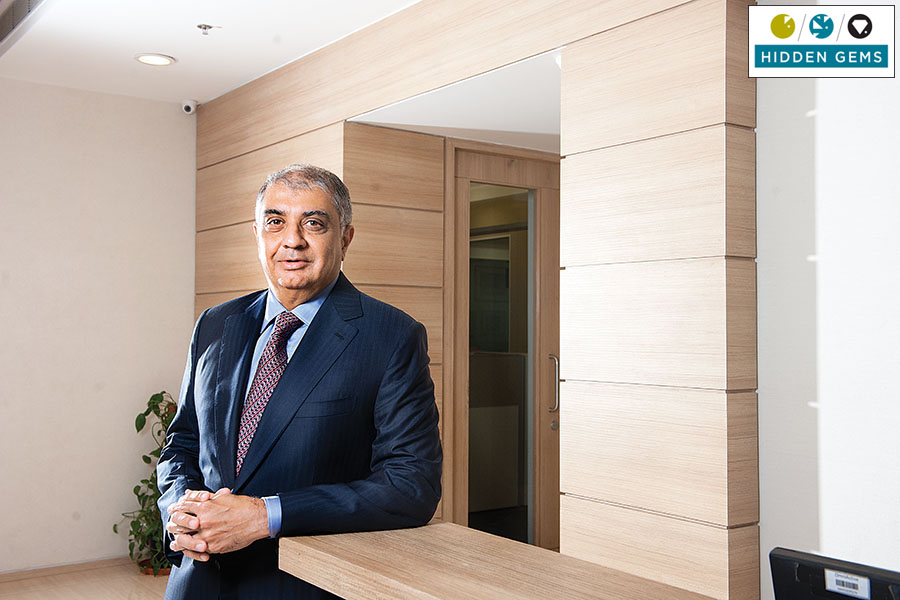 Sanjaya Mariwala started OmniActive in 2005 after he noticed a growing shift towards preventive medicine; Image: Mexy Xavier
The humble marigold flower is often offered in devotion to deities. Sometimes, however, that bright ball of orange finds itself living an even more exalted life. A specially bred version is treated in laboratories to extract lutein, a valuable compound with proven eye benefits, from its petals. That is then encapsulated into tiny ‘beadlets’ and sold to manufacturers who use it to make dietary supplements or fortified foods that are marketed to consumers.

In various districts of Karnataka, nearly 8,000 growers are engaged in cultivating this special variety of marigolds. Contracted by OmniActive Health Technologies, the farmers’ produce is shipped to state-of-the-art manufacturing facilities in Pune where lutein is mass-produced by the Mumbai-headquartered company and then exported to markets in the US, Canada, UK, France, China and Japan.

“Control over the supply chain right from the raw material stage is a key USP of OmniActive,” says Sanjaya Mariwala, who founded the company in 2005. The silver-haired 58-year-old sniffed opportunity in the then hot market of ‘nutraceuticals’—a fancy term used to describe foods with medicinal properties, including functional foods like vitamin-fortified milk and nutritional supplements. He was familiar with the space having run Kancor Ingredients (formerly Bombay Oil Industries set up by Mariwala’s grandfather Kanji in 1911), a Kerala-based pioneer in the extraction of spices like black pepper, turmeric and paprika, for 24 years.

Its customers included processed food companies as well as flavour and fragrance makers. “The company was functioning well without me, so I figured I wasn’t needed anymore,” quips Mariwala about the latter part of his tenure. At the same time, he noticed a shift towards preventive medicine. Rising health care costs, sedentary lifestyles and ageing populations were leading people the world over to turn to preemptive health care measures.

Mariwala was also quick to realise that India, with its abundant supply of natural raw material like herbs, spices, fruits and flowers, as well as its rich history of ayurveda and related sciences, could become a key supplier of natural nutraceutical ingredients to global health care and food companies. With initial funding from private investors, he got cracking with a small team of scientists, engineers and technologists. His Kancor days had familiarised him with best-in-class manufacturing practices through technology know-how partnerships forged with globally renowned companies; so he hit the ground running.

Within a year of operations, OmniActive was mass-producing scientifically and clinically validated lutein-based ingredients patented under the brand name Lutemax. A concentrated capsicum extract beneficial for weight management branded as Capsimax and CurcuWin, a bio-available form of curcumin found in turmeric, which supports healthy ageing, followed. Today, OmniActive holds 38 patents, has applied for 60 more, derives 99 percent of its revenues from exports and boasts heavyweight customers like Pennsylvania-based health and nutrition-related product manufacturer GNC, direct-seller of dietary supplements Amway and wholesaler Costco. The company posted an Ebitda of ₹77 crore on revenues of ₹470 crore last fiscal.

“They have high quality, pharma-grade manufacturing plants, which is rare in this space. Most Indian companies don’t adhere to such standards,” says Deep Mishra, managing director at Everstone Capital, referring to OmniActive’s US Food and Drug Administration (FDA)-approved manufacturing facilities in Pune and Supa in Maharashtra. (OmniActive has two more plants in Tamil Nadu and Karnataka.) This, plus its vertically integrated supply chain and three state-of-the-art R&D facilities in Thane and Pune, position OmniActive as a supplier of choice for global nutraceutical product makers, says Mishra. Early last year, he led Everstone’s $35 million (₹232 crore) private equity infusion in OmniActive, and now serves on the board.

Shortly after the fund raise, OmniActive acquired Indfrag, a Bengaluru-based producer of natural extracts for dietary supplements, sports nutrition, pharmaceuticals and food and cosmetic industries. “It complemented our portfolio well,” says Mariwala. Post the acquisition, OmniActive was restructured into two business units: NIS, which focuses on branded solutions like Lutemax, Capsimax and CurcuWin that claim specific health benefits, and SBE to support non-branded ingredients, primarily from the Indfrag stable.

Ask Mariwala about competition and he’s quick to point out DSM, the Dutch manufacturer considered the global leader in the nutraceutical ingredients market. In India, the market is fragmented and there aren’t too many players who produce at the quality and scale that OmniActive does.

Bengaluru-based Sami Labs, which along with its US subsidiary clocked revenues of about ₹970 crore in FY17 (compared with OmniActive’s ₹333 crore), is perhaps the only contender. But OmniActive’s deep relationships with customers across the world, its research-driven approach to creating differentiated products and strong track record of meeting regulatory requirements and commercialising products are strong moats, says Mariwala. Moreover, while OmniActive is positioned as a B2B player in foreign markets, in India, the company has forayed into the B2C segment. Setu, launched by Mariwala’s son Nihaal in October 2017, offers dietary supplements for preventive health care via the ecommerce route. Tie-ups with doctors to prescribe these supplements to patients, if deemed fit, are also underway. But at less than 2 percent of the $198 billion global, end-user nutraceuticals market (functional foods, supplements, etc) as per 2016 industry estimates, the Indian market is still young. “India is a price-conscious market. That is slowly changing, but it will take a few years before it really picks up,” says Mariwala.

Another reason India is a difficult market is because of age-old home remedies. “My family couldn’t figure out why I was popping CurcuWin tablets, instead of just drinking haldi doodh,” says Deeksha Sharma, marketing manager at OmniActive. It took much effort to make them understand that getting all of one’s nutrition needs from food is not always possible, she says.

Business projections for FY19 stand at ₹124 crore Ebitda on revenues of ₹540 crore, and positive net profit. Even as OmniActive’s “highly professional management team”—as Mishra puts it—leverages the company’s strengths around raw material sourcing, R&D and manufacturing smarts to achieve this target, Mariwala has his eye on more acquisitions. He’s drawn up capital expenditure plans of around ₹150 crore over the next three years to support inorganic growth and might consider an initial public offering in four to five years. “I’m a golfer; you have to visualise a shot before you play it. In business too, I’m continuously visualising the big picture,” says Mariwala. Just like the sport, success for OmniActive will depend on his ability to take the long view and adeptly strike the target.