In 1988, Meena Bindra created the Biba brand from her Delhi home. Today, it is a market leader in affordable occasion wear, and her son Siddharath has played a key role in its growth 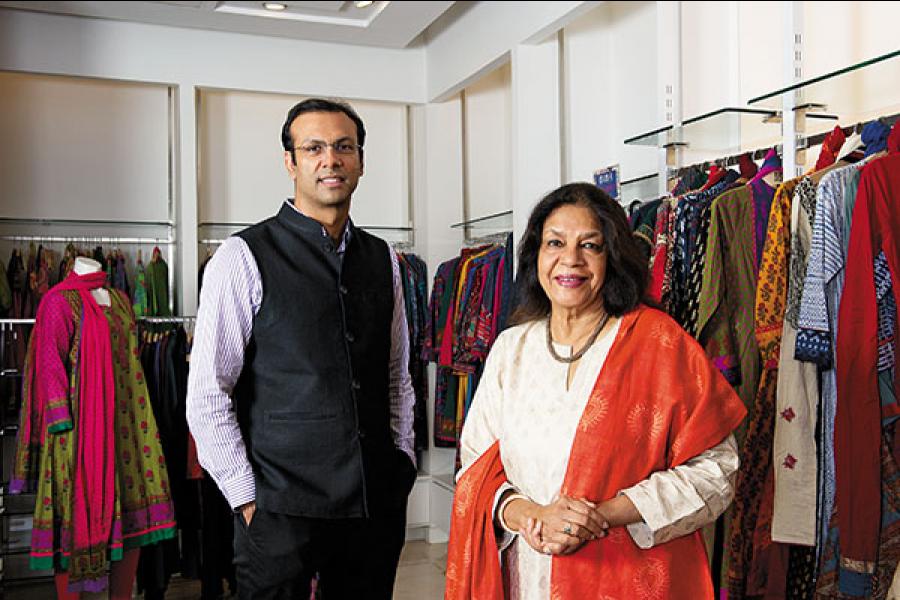 When Kishore Biyani’s Future Ventures (now Future Consumer Enterprise) invested in Biba Apparels in 2007, the Delhi-based women’s ethnic wear brand was doing sales of Rs 30 crore. When Future exited in 2013, Biba’s revenues had grown to more than Rs 300 crore; and new investors—Warburg Pincus and Faering Capital—spent nearly the same amount to buy out Future’s 25.8 percent stake. This deal valued the apparel-maker at about Rs 1,000 crore.

Biba has come a long way since 1988, when Meena Bindra, now 71, started designing clothes from her house. It leveraged the popularity of affordable occasion wear, and has built a presence across 65 Indian cities with 375 points of sale, including 150 exclusive brand outlets (EBOs) and 225 multi-brand outlets (MBOs). Biba’s salwars and kurtis have not only managed to compete with established local names in metros and tier-1 cities, but has also appealed to the aspiring middle class in tier-2 towns.

“Ten years ago this was an unorganised category with no brands,” says managing director Siddharath Bindra, founder Meena’s 39-year-old son, who is now managing director of the company. “We were the first national brand in the category, and this gave us the first-mover advantage,” he says.

Biba has a central warehouse in Delhi, but it sources raw material from textile belts across the country.
Following its success, many other players have emerged in the Indian ethnic wear market. Designer Anita Dongre’s Global Desi, which started in 2007, competes with Biba at the national level. While the latter may have higher revenues at this point, it isn’t growing complacent. In April, it launced a value-fashion brand Rangriti, which offers daily/casual wear in the range of Rs 500-Rs 2,000, to appeal to the masses. The company also plans to expand its premium collection ‘BIBA by Rohit Bal’.

The People Behind it
As chairman, Meena Bindra has a huge influence on Biba’s design sensibilities. She started the company with Rs 8,000 in her pocket. Her son, Siddharath, who joined the business in 1997, was inspired by her perseverance during the fallow years that ensued. Together, Meena and Siddharath have presided over a revenue growth of 35-40 percent in the last eight years. 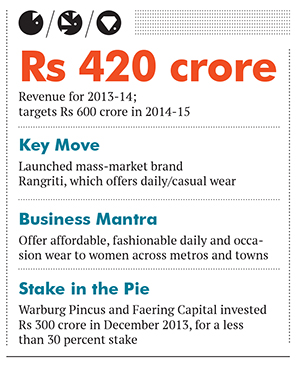 Why it is a gem
Siddharath estimates that the women’s ethnic wear market in India, currently pegged at Rs 54,425 crore by retail consultancy Technopak, will grow by 10 percent, but branded players—which currently account for about 25 percent of it—will grow at 40 percent. “The Biba brand is 95 percent of what we do—hopefully, that will change soon,” says Siddharath, adding that Rangriti has generated Rs 60 crore in sales already.

Investor Warburg Pincus is not only a prominent private equity (PE) firm globally, but also has a strong interest in the clothing retail space. In September 2013, along with fellow PE investor TPG Capital, it sold US retail chain Neiman Marcus for $6 billion to Ares Management and the Canada Pension Plan Investment Board (CPPIB). But, “I’m not sure I want to exit this [Biba Apparels] in a hurry,” says Mahadevia wryly.

The fact that Biba is debt-free makes it very attractive to investors. Plus, its stores operate at a 20 percent Ebidta margin, and all its outlets are cash-positive. With an expected revenue growth of 35-40 percent, it will be a Rs 5,000-crore company in just over seven years. Adds Mahadevia, “[The] rising middle-class [which is] spending money will want good, ready-to-wear, affordable fashion.”

Faering Capital, Biba’s other new investor, is even more bullish on the Indian women’s wear market, and also owns a stake in the popular lingerie brand, Enamor. Though Enamor operates in a different category, many of its distribution channels are similar to Biba’s, and there are lessons to be shared, says Sameer Shroff, managing director and co-founder, Faering Capital. Biba also has an online presence, which accounts for 10 percent of the sales, and is witnessing “tremendous growth”.

Why it was hidden
Many consumers are aware of brand Biba, but very few know of Biba Apparels, the business. Its size doesn’t lend itself to much visibility. Consider this: Even if Biba meets its 2014-15 sales target of Rs 600 crore, it will still be less than 1 percent of the overall women’s ethnic wear market in India.

Further, nearly two-thirds of Biba’s 375 points of sales are not their own stores, but store-in-store outlets at multi-brand retail shops such as Lifestyle, Shoppers Stop and so on. “Every large city will have 4-5 established retailers with goodwill,” says Siddharath. But there are few competitors in their segment who have a nationwide presence, he adds.

Risks and Challenges
Biba has been careful in choosing locations for its stores. Its rental costs are less than 10 percent of sales, and only nine of its stores have shut down so far, mostly owing to the closure of malls. Maintaining this rent-to-sales ratio will be crucial for the Bindras. “Sub-standard locations or high-priced leases don’t work,” says Warburg’s Mahadevia.

But Biba is ready to tackle these challenges. Its journey from a house-company in Delhi to a pan-Indian fashion brand is testimony to the spirit and determination of its founders.