The perfume manufacturing company, which started its operations from a Mumbai garage, now has a client roster of FMCG A-listers 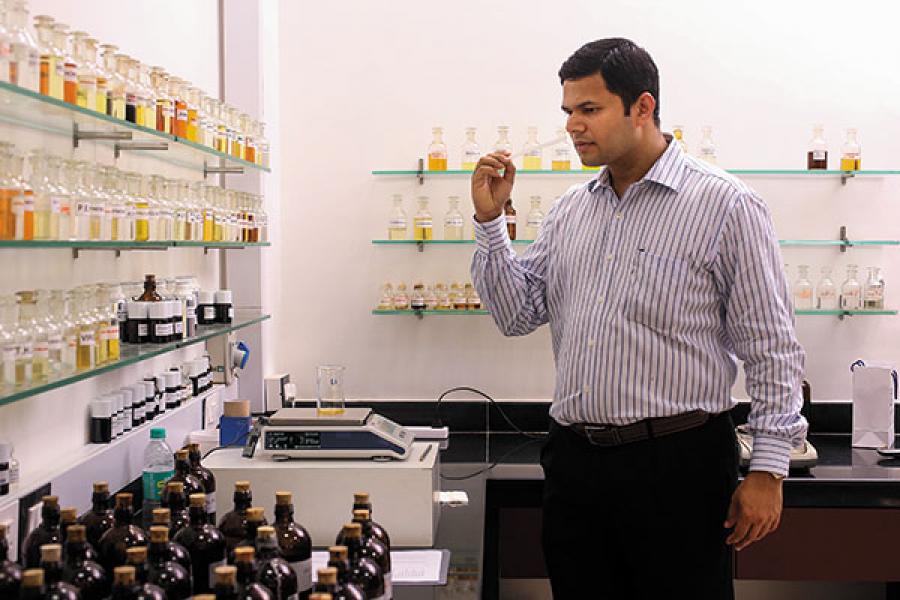 Scents replaced fumes at a garage in Mumbai’s Dadar area when the Kelkar family decided to set up a fragrance manufacturing unit in the 1920s, inspired by Gandhi’s Non-Cooperation Movement that had urged India to ban imported materials.

In the early days, the company, christened SH Kelkar after its founder, would create products in the garage and sell them to merchants nearby. “Whatever they produced, they sold,” says Kedar Vaze, the current chief operating officer (COO) and part of the third generation of the Kelkar family. (His grandfather was adopted, and later changed the family’s surname to Vaze.)

By the 1950s, modern soap-making started in the country and SH Kelkar began supplying fragrances to Godrej & Boyce, the first-mover in this industry. (Soaps are now manufactured by Godrej Consumer Products Ltd.) It has since been expanding its bouquet of fragrances to fit the ever-widening array of consumer products sold in India. Think hair oils, shampoos and, of course, soaps, all of which are more often than not perfumed. Household names infused with SH Kelkar include the likes of Parachute Hair Oil and Godrej No. 1 soap.

Since its inception, demand has been consistent as has business, which has grown at an average 15-18 percent annually. Today, SH Kelkar counts among its clients top Indian FMCG companies such as Marico and Jyothy Laboratories; it has also become active in the export market. The steadiness of its operations has been instrumental in attracting top dollar from Blackstone India: The PE firm paid Rs 243 crore for a 33 percent stake in the firm in 2012.

The Men Behind It
The opportunity spotted almost a century ago started to achieve noticeable scale in the 1960s when the second generation of the Kelkar family joined the business. Reason: They were all trained chemists who could tailor the products to suit an expanding roster of clients. What also helps is the fact that “every generation has consolidated the business within one family”, says Vaze. This has led to quick decision-making and no duality of control.

But being family did not necessarily mean an easy entry into the top echelons of SH Kelkar. Despite being to the manor born, Vaze, 41, had to prove his mettle to lead the company. A trained chemist, he worked in five departments before moving to the role of COO. In what is a rarity in Indian family businesses, he currently reports to B Ramakrishnan, the CEO who is from outside the family. (Father Ramesh Vaze is the managing director.) However, in 2015, after having been COO for four years, Vaze will move to the post of CEO, while the incumbent will take on a consulting role.

Once at the helm, Vaze’s plan is to build SH Kelkar into one of the top 10 fragrance manufacturers in the world—it currently ranks among the top 25. 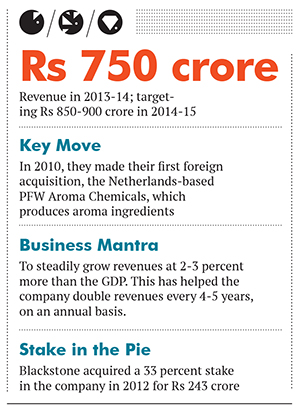 Why It Is A Gem
His ambitions are not unfounded. For one, SH Kelkar is already a dominant company in the fragrance business which, globally, is highly specialised. As Vaze points out, “It is very easy to start a company and reach Rs 5 crore in turnover. But, after that, the going gets very difficult.” Relationships with key clients are of importance. Also, it is crucial to have resources which can work on creating new fragrances. Then there is the need to retain the intellectual property of those formulations. These competences take time to develop, giving SH Kelkar a largely unshakeable position in the industry.

Second, the predictability of the business makes it highly valued by investors for its stable cash flows stemming from annuity income. Globally fragrance firms command valuations in price/earnings range of 22-23, similar to that of FMCG businesses.

Third, as SH Kelkar gets into business with subsidiaries of multinationals in India, it could even start supplying to the global parents. And, for a change, competition from Chinese companies is negligible as SH Kelkar provides “tailor-made products versus readymade products”, says Vaze.

Why It Was Hidden
Few had heard of SH Kelkar until recently, when Blackstone picked up a stake. This was primarily because the company is not consumer-facing, operating in the B2B space for the most part. There are exceptions such as Fancy Bouquet, an ittar brand, which was launched almost half a century ago, and continues to be manufactured and sold across India and exported to the Middle East.

Also, while the business was growing at a steady pace, SH Kelkar’s entry into the big league was uncertain. Now that the company has crossed Rs 750 crore in revenue (for FY2014), a 15 percent growth leads to a sizeable addition to the topline every year.

Risks and Challenges
A persistent problem has been its inability to pass on the costs of high inflation to the customers with immediate effect. While it is able to raise prices, there is typically a lag which hits profitability in the medium term. “We have large stock-in-trade which results in huge working capital requirements,” says Vaze. The lack of trained manpower is another impediment in this process-driven business.

But nothing can dull the sweet smell of success for Vaze who happily points out: “There is hardly any chance of a decline in revenues as 90 percent of the customers are sticky.”