Consul Consolidated: Making the Most of Power Problems 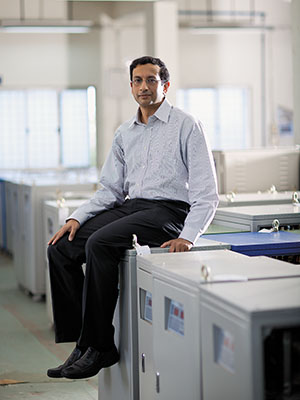 Few businesses will risk a ‘heads I win, tails you lose’ attitude unless, say, they are part of the power conditioning industry in India. In that case, their boldness is justified: They have unending demand in sight.

There is a growing need for power conditioners (devices that improve the quality of power) and uninterruptible power supply (UPS) systems because of outages as well as the low quality of power across the country. In both residential and commercial sectors, people are getting accustomed to the comforts of elevators and air conditioners or are investing in technologies that call for high-quality, uninterrupted power. This cycle promises to keep demand up even if India does manage to solve its power shortage problems in the coming years.

As Sriram Ramakrishnan, CEO of Consul Consolidated, likes to point out, total power outage in the US is just three minutes in a year and, yet, it is one of the largest markets for UPS. “This outage doesn’t take place in a stretch. There are 30-40 interruptions that add up to three minutes. But people want uninterrupted power supply. That kind of tells you something about this business,” he says.

The People Behind It
Consul was founded by N Ramesh Sankaran, KN Raja, K Sunder and NP Krishnan back in 1981. The four promoters had built a strong sales and services network across the country, a reputation among its industrial clients.

When Peepul Capital Advisors took a majority stake in Consul in 2012, it zeroed in on Sriram. “When we picked up a stake in Consul, it already had great people, a good reputation as well as a solid sales and service network,” says Venkat Shankar, investment director at Peepul. “What we wanted to do was scale it up.”

He adds, “In Sriram, we saw a happy convergence of the right kind of skill sets in terms of technology, strategy and business development.”

Sriram is an electrical engineer by training and profession. After getting his bachelor’s degree from India, he went to the US to study for a master’s in power electronics. He was subsequently hired by GE where he developed power products for medical imaging systems, aircraft and so on. He was also a part of the team that launched the company’s UPS business; he was, in fact, involved in the presentation of the plan to CEO Jack Welch. He only moved out in 2003 when he followed his boss, Ed Komoski, to Powerware, which was later acquired by Eaton Corporation Inc, a power management major. There, he built the data solutions business from scratch and took it to $120 million in three years.

After 15 years in the US, he moved to India in 2008, joining the Chennai-based Sanmar Group to run its industrial valves business; he helped capture 20 percent of the market share in the first two years. 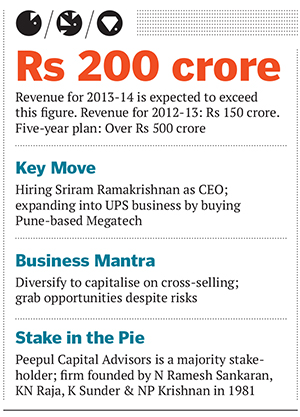 Why It Is A Gem
When Sriram joined Consul last year, his mandate was to grow the business five-fold, to Rs 500 crore, in five years. During the last several months, Sriram has been setting up the growth process.

Earlier this year, Consul acquired a majority stake in Pune-based Megatech, a UPS, inverter and solar power product manufacturer, a move that helped expand its product portfolio. In a relationship-driven business, a wider range of products means more cross-selling opportunities. Therefore, while it has largely catered to industrial customers so far, Consul is now expanding to the retail and residential segments. Its traditional markets are booming too. For example, as clinics invest in high-end medical equipment (there is mounting demand for refurbished equipment in India today), they also purchase power conditioning equipment (to manage voltage, for one).

Sriram, who himself holds four patents, has also stepped up research and development in order to customise products for Indian conditions.

Why It Was Hidden
Till the investment by Peepul Capital Advisors, Consul was a typical, low-key, promoter-driven South Indian business. Since it primarily dealt with industrial customers, the brand was built more through relationships and service than through marketing. It was, of course, privately held.

The quiet approach is expected to change now.

Risks and challenges
An IPO is not even on their minds yet, says Shankar. “The main focus now is to scale the business up to over Rs 500 crore.” But while the power conditioning sector has the potential to grow irrespective of the quality and quantum of power supply (as the demand in the US indicates), the business is too dependent on the robustness of the capital goods sector. A dip in demand there greatly affects the power conditioning product industry.

Consul is trying to spread its risk by looking at the retail and residential markets but those require a significantly different mindset. It means getting into a consumer-facing business and it is unclear how the company will fare in this new ball game. But, as Sriram says, “We can achieve our sales target with just the B2B business but we have this huge opportunity staring at us. And we cannot ignore it.”