Though the company is far from a one-brand wonder, Satya Paul continues to be its calling card 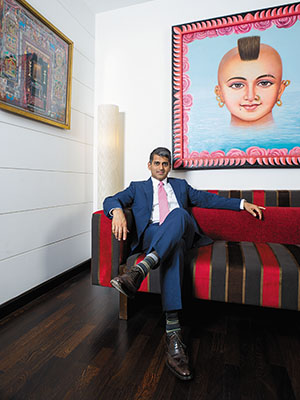 Image: Amit Verma
Sanjay Kapoor, MD of Genesis Luxury, wants to add 25 stores in each of the next two years

One of India’s largest fashion retailers in the premium and luxury segment is, ironically, not a familiar name to the average shopper. Ask about Genesis Colors and you are likely to draw a blank. But mention Satya Paul and you are on familiar terrain. Designer brand trumps company brand: That is the Genesis business model.

Here’s how it works. Although founded in 2001, the Genesis story began in 2002 with the launch of a revamped Satya Paul. Named after the designer who created it in 1985, the brand had established itself in the Indian fashion firmament before it came under Genesis’s fold. But it was only after 2002 that Satya Paul scaled up to become, arguably, the country’s leading homegrown fashion brand in the high-end segment. And Genesis’s biggest success. It has 30 exclusive stores in India, the largest network for any domestic premium brand, and accounts for 30 percent of Genesis’s Rs 310 crore revenue (for 2012-13).

The scale is unique for the upscale end of the Indian apparel sector which is dotted with designers, many of whom are celebrities but often fail to create a successful business. This segment constitutes about 25 percent of India’s premium/luxury market, worth $5 billion, says Ankur Bisen, head of retail and consumer products, Technopak, a management consulting firm.

Given Satya Paul’s stature, Genesis could have stayed a one-hit wonder. But it didn’t let that happen. In 2008, it created Bwitch, a lingerie brand which is claimed to be the second biggest in its category and the fastest growing. Around the same time, it began distributing premium international brands through Genesis Luxury.

Of the 21 brands in Genesis’s portfolio—the largest of its kind—14 are from the luxury segment and include Giorgio Armani, Canali, Burberry and Jimmy Choo. It has 130 exclusive brand stores in 20 cities, and expects to cross Rs 400 crore in revenue in 2013-14.

“This business is not rocket science,” says Kapoor. “It is all about execution.” A simple approach that has made them a favourite of foreign brands seeking partners in India. It helps that Kapoor and Narula had worked at Citibank and have a perspective on cost management. Genesis was not always the first choice but came in after the brands’ earlier partners failed to deliver.

The founders, along with Nikhil Mehra, COO of the luxury division, and Rajiv Grover, COO of the Indian brands division, are a team that Vikram Godse, MD of Mayfield Fund, says is the industry’s best. Mayfield invested in Genesis in 2008. “They have turned around international brands in India because they understand the consumer,” says Godse. This reflected in their search for retail space and in subtle refashioning of the products. 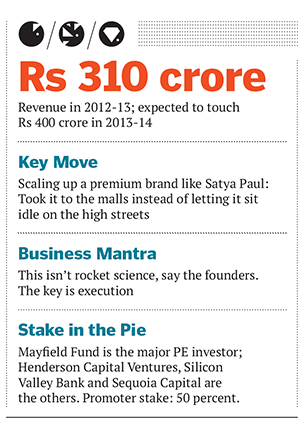 WHY IT is A GEM
Kapoor admits to failures but maintains that his team’s ability to sustain a 28-year-old brand like Satya Paul, and keep it relevant, is rare.

The central problem for this segment, says Technopak’s Bisen, is lack of appropriate real estate. “Even so-called high streets in India do not have an environment that will pull customers,” he says. Kapoor and his team shut down their high street outlets and sought out the best malls. In most, brands distributed by Genesis get most footfalls, the company claims.

Kapoor made another interesting move last December by roping in 24-year-old Masaba Gupta (daughter of veteran actress Neena Gupta and former cricketer Viv Richards) to replace Nanda. Critics saw this as an attention-seeking tactic but Grover disagrees, saying, “We have been able to reinvent the brand and it has become as popular with youngsters as it is with the older generation.”

WHY IT WAS HIDDEN
One reason why Genesis has not been at the forefront is because it has been focussed on helping sell the brands it sells. Few designers understand the need to control costs, manage inventory and rationalise supply chains. Kapoor says, “Suits need to marry art to make this business successful.” This segment too needs experts in finance and operations.

Many local companies believed that the equity of an international brand would be enough to attract customers and make money. Not so, especially when the customer is well travelled and has had access to these brands for years. Genesis has brought in that understanding without straying into the limelight.

RISKS AND CHALLENGES
Though Kapoor wants to add around 25 outlets in each of the next two years, he will be limited by the lack of quality malls. “Also, while premium malls in good locations are few, real estate also accounts for our biggest costs,” he says. And this has hurt margins. The Ebitda at 10 percent is half of the international average. But then, brand building is a long-term business.

Tweets by @forbesindia
The 2013 Forbes Fictional 15
Consul Consolidated: Making the Most of Power Problems