Vietnam has come a long way from the Socialist foundations that it built its modern economy on. 2009 marks the 50th anniversary of the beginning of the Second Indochina War.
Destruction caused by the 1959-75 Vietnam War seriously strained Vietnam’s economy. The situation was worsened by the 1.5 million deaths and the exodus of 1 million refugees, including tens of thousands of professionals, intellectuals and skilled workers. The Vietnamese government budget for 1976 was $2.5 billion, while investments of $7.5 billion were planned for between 1976 and 1980.
But, for a small country, Vietnam sure knows how to get around. 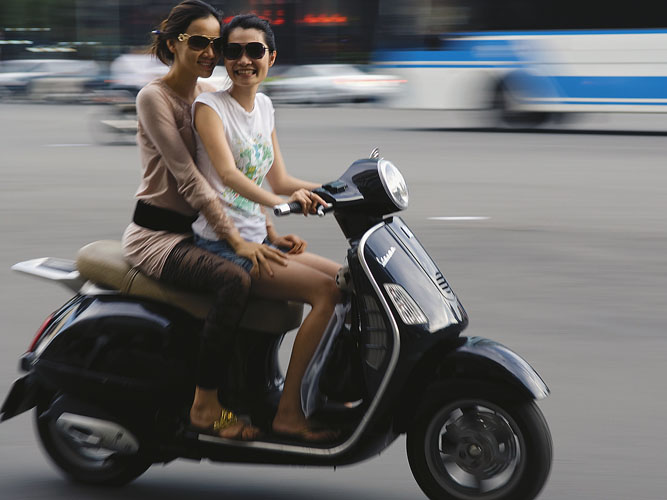 Image: Steve Raymer/Corbis
UP TO SPEED: Even though it started out as a Socialist Nation, Vietnam is steadily moving towards becoming a market economy. The country became a member of the WTO on November 7, 2006
According to the Asian Development Outlook 2009 Update by the Asian Development Bank, “despite the weak external environment, the Vietnamese economy has continued expanding this year, albeit at a slower rate. GDP grew by 3.9 percent in the first half of 2009”.
Trade is booming as well. According to The World Investment Report 2009 brought out by the United Nations Conference on Trade and Development, “In 2008, FDI inflows to the country totalled $8 billion, up nearly 20 percent from the year before. In the UNCTAD’s World Investment Prospects Survey 2009 – 2011, Vietnam ranked 11th among the most preferred investment locations for foreign investors in 2009.
India’s decision hasn’t come a moment too soon. Dr. Ram Upendra Das, Senior Fellow and Economist at the Delhi- based Research and Information System says, “India aided Vietnam to increase its rice production and now Vietnam is the largest rice exporter in the world. India and Vietnam have signed a Bilateral Investment Promotion and Protection Agreement as far back as 1997–1998.” India’s investment in Vietnam is smaller than countries like Taiwan, South Korea and British Virgin Islands. However, the increase in bilateral trade has been significant. While it was $11.5 million in 1984–1985, it grew to $395 million in 2003–2004. Between 2001 and 2006 it grew at 20–30 percent and touched $1 billion in 2006.
According to Das, one of the problems in Vietnam is that the banking system is not very developed — a problem faced by many emerging market economies. But there has been reform in the area of FDI regulation. In 2000, Vietnam passed the Enterprise Law which reduces entry barriers to foreign companies. Plastic, pharma, office furniture, sugar and oil exploration are the main sectors investing in Vietnam. ONGC Videsh, a wholly-owned subsidiary of Oil and Natural Gas Corporation Limited (ONGC), has had a presence in Vietnam since 1988. Essar Oil’s upstream exploration and production subsidiary, Essar Exploration & Production Ltd, Mauritius, has been awarded a shallow water block in Vietnam’s prolific Song Hong basin, measuring approximately 5,925 sq km in 2008.
The two countries are likely to collaborate on software and agricultural research and on joint mineral exploration.

(This story appears in the 06 November, 2009 issue of Forbes India. To visit our Archives, click here.)