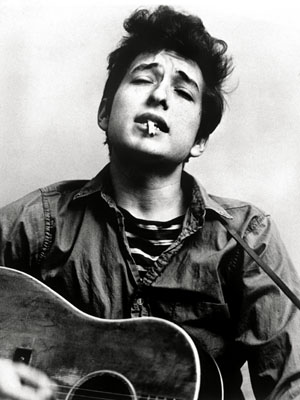 By the time you read this, Bob Dylan would have completed seven decades of a scarcely believable existence. Of these, he’s been making music for six decades. Dylan has outlasted Beatlemania by 40 years, though you can argue about Beatlemania lasting forever, but not The Beatles. He’s barely broken sweat as the punk and the post-punk revolution shook the establishment for a few seconds, and perhaps sneered in irony as the bubblegum pop of the late ’90s saw its, well, bubble burst. Pretty soon, Bob Dylan will remain the only enduring image of the ’60s, and the counter-culture, anti-establishment ethos it stood for.

How does it feel, Bob, to be on your own?

As a callow youth, I’d come up with a joke that made me immensely popular with my fellow rockers, who didn’t ‘get’ Bob Dylan. “What’s been Bob Dylan’s greatest contribution to music? His son Jakob [Dylan, lead singer of The Wallflowers]”.

I know what you’re thinking, but it really was funny when you were just 20.

Much like Sachin Tendulkar, Bob Dylan’s longevity means you tend to run out of superlatives, or criticism, to describe it. We can’t classify his music. Was it folk? Was it electric folk? Was it proto-punk? Was it rock and roll? All we know for sure is Robert Zimmerman was a huge fan of the poet Dylan Thomas, ergo the name change. And even diehard fans wouldn’t venture so far as to say they’ve heard his entire discography.  It is, quite simply, immense. It’s also fair to argue that when he won the Grammys, it was really more of an apology for having overlooked him over three decades.

My mind goes back 10 years — Rang Bhavan in Mumbai, the last bastion for renegade musicians and angry youths wanting to rage against the machine, was witness to a “Thank You Bob” concert, in celebration of his 60th birthday. I was 20 then, and easily at least 15 years younger than the average age of the 500-odd attendees. I witnessed the absolute devotion to Bob from an entire generation of music fans. That was still an era when a genuine revolution didn’t include re-tweets and Facebook.

Recently, I looked — where else?­ — at my Twitter and Facebook feed to see if His Bobness has made any impression on the ‘yoof culture’. Though Bob Dylan was trending on Twitter across the world, the only reference in my timeline to Dylan came from a youth channel, which chose to reminisce about Dylan’s Newport Festival, 1965. This channel, however, just put up a single pic with a quote, “Play it f*&%ing loud”. I’m sure that it was the profanity, more than the symbolism at Newport, that struck a chord with this channel’s twitter feed-bot. (Wait, it was manned by an actual human?)

A few younger friends and professional acquaintances, perhaps not having walked down enough roads to become men, were largely clueless about his role in defining music. They focussed on his flings instead. “Joan Baez? And Sheryl Crow? Character dheela hai”, they concluded, somewhat hastily. The times they are a changing, I sighed.

And what, I wonder, do the ‘folk purists’ make of Bob’s career after they told him to stuff it after Newport 1965? I wonder if they thought whether the electric phase couldn’t last. It’s been 46 years and counting. I wonder if they still sneer at Lay Lady Lay, Knockin’ on Heaven’s Door (no, it wasn’t a Guns N’ Roses original), and the exceptional Cold Irons Bound? Do they refuse to bring out their DVD players to watch one of the most exceptional rockumentaries of all time — the Martin Scorsese directed No Direction Home? Honestly, I don’t think Bob Dylan cared much.

To the man who, (allegedly) introduced John Lennon and Paul McCartney to a substance stronger than whisky, gave us two memorable rainy day women (#12 and 35, but you knew that), a hundred knock-offs from Bruce Springsteen to Tom Petty, keep on rolling. As for what’s next, well, it’s blowing in the wind.

Tweets by @forbesindia
Podcast: The Story of G.M. Rao
How Will Cheaper Cancer Drugs Help?