How Will Cheaper Cancer Drugs Help?

For those affected by this debilitating disease, a price control on cancer drugs can bring at least short-term relief

In his Pulitzer Prize winning book, The Emperor of All Maladies, oncologist-author Siddhartha Mukherjee calls cancer the “defining plague of our generation”. A rather morbid description of a disease that until recently trailed infectious diseases, particularly in India, in garnering public policy attention, but is now inching up on the government’s agenda. 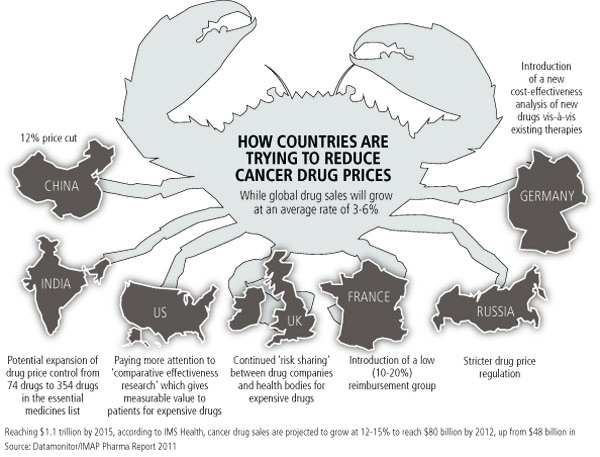 The government revised its list of essential medicines after eight years, and the new list includes drugs for treating cancer. Once the New List of Essential Medicines (NLEM) is notified, the Ministry of Chemicals and Fertilisers will push for imposing price control on all the drugs on the list. This could have been triggered by the Supreme Court’s directive to the government to do so. Right now, the government controls the price of only 74 of the 354 drugs on the list.

So, what does the presence of cancer drugs on the list of essential medicines mean for patients? They will get affordable treatment in the short term; however, the quality of a patient’s life in the long term remains questionable.

“On an average, 15 to 30 percent cost reduction can be expected. In a treatment whose cost ranges from Rs. 5 lakh to Rs. 15 lakh, even this price reduction can bring significant relief,” says Himanshu Goel, assistant vice president of Guardian Lifecare, a wellness and pharmacy retail chain. However, he advises patients to negotiate with pharmacies and stockists, as this can bring down prices by 15-20 percent from the maximum retail price (MRP).

Globally, cancer is a scourge and drug sales for this malady are growing twice as fast as other pharmaceuticals. India is no exception. Of the 1,153 drugs that saw price increases in the quarter ending November 2010, anti-cancer drugs were the only category (other than contraceptives) where price increase exceeded 15 percent, according to PharmaTrac, a report from the All India Organization of Chemists and Druggists.

For a disease that affects 2.5 million people in India, with about 800,000 new cases reported every year, cancer drugs are beyond the reach of the average patient, says a study of the Department of Industrial Policy and Promotion.

Former medical oncology chief at Tata Memorial Centre in Mumbai and current head of Indian Co-operative Oncology Network Purvish M. Parikh says price control reduces the base price of the drugs by 10 to 90 percent. “But,” he says, “the list is slightly skewed; I don’t get the logic behind it.” Drugs for some of the common cancers in India — such as testicular and breast cancers — that are curable, are not in this list, he says.

An essential list has to be a bare-bone roster of drugs whose all-time availability and affordability is the government’s responsibility, says Y.K. Gupta, head of the Department of Pharmacology at AIIMS, New Delhi, who chaired the committee that prepared the NLEM. “By and large, the majority of cancers can be handled by these drugs,” he says.

However, Gupta cautions that the government should consider the profitability of drug companies while enforcing price control. In the past, manufacturers have stopped producing drugs that have low profit margins.

Additionally, just as cancer is not a single disease but many diseases, so is its treatment. It requires a combination of drugs that can often change, a fact that is exploited by drug manufacturers — they circumvent price controls through “non-standard combinations”. In dealing with this “pervasive adversary”, the government has to walk a tightrope. “It must ensure access and affordability in a manner that the industry finds sustainable,” says Gupta.