The Floppy Drive Can't Save Itself

The floppy was the first portable storage device for computer users back in the day. Now, it has outlived its usefulness

Future generations won’t recognise the floppy disk. It’ll be as alien to them as cassettes are to today’s generation. But that doesn’t mean they won’t see it. They’ll see it whenever they click on the icon that is used to save a file on a typical Microsoft Office document.
Sony Corporation, the last major company to still manufacture floppies, announced that it will stop manufacturing the aged storage device in 2011 for its Japanese market.
The floppy has been dying a slow death for some time now. PC World, one of Europe’s largest retailers, announced in 2007 that it would stop selling floppy disks, once its existing stock was over. Sony stopped floppy sales to Europe some time back.
Hardware manufacturers like Dell Inc. took the call seven years ago, and stopped including a floppy disk drive in their laptops. S. Rajendran, chief marketing officer, Acer India, says, “At Acer, we stopped manufacturing floppy disk drives in laptops three years ago and up until a quarter ago they were present in our PCs.”
Why did Sony wait so long to follow suit? Because 12 million floppies were sold in Japan last year and Sony had a 70 percent market share in the country. Why would one of the most technologically savvy countries still use the three-and-a-half inch format with a paltry 1.44 MB storage capacity is a mystery, but Sony has decided to pull the plug because of ‘lack of demand’. Floppy disks will still be available in emerging markets, where they still have some demand.
Floppy disks were first introduced in an eight-inch format by IBM in 1971. Since then, the format of the floppy disk underwent several changes. But it was only during the 80s when Sony introduced the three-and-a-half inch format that floppies became popular as portable storage devices. Sales peaked in the 90s as PCs became affordable and were used in homes. 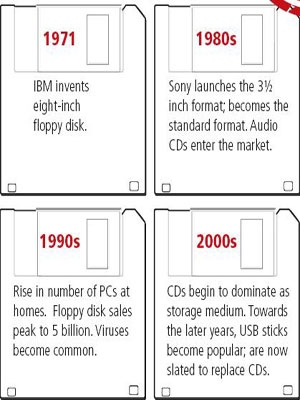 Anjan Lahiri, President and CEO (IT services), MindTree, says, “I remember MS DOS was such a big piece of software that it used to ship with two floppy disks in 1988. These were five-and-a-quarter inch disks.” Rajiv Bhalla, country head, NEC India, says, “I’ve played around with 20 diskettes to load a program — it was an inventory management software called Octopus.”
Today, however, IT gives floppies a miss. Executives had to think hard for the last time they used floppies. Acer’s Rajendran says, “Right from the day I joined Acer, I have not used a floppy disk, and that was 10 years back. We used CD media to have a back-up for our library.”
Although people don’t use floppies any more, floppy disk drives (FDDs) are still in demand. An FDD on ebay would cost you Rs. 745. Not surprisingly, FDDs are still popular in government offices in India, where data has been stored in floppy disks.

(This story appears in the 30 July, 2010 issue of Forbes India. To visit our Archives, click here.)