Trump wants to impose restrictions on Twitter content through regulatory arm-twisting. Twitter wants to control Trump's ability to communicate with his base by labelling his tweets. What works better for the public good? 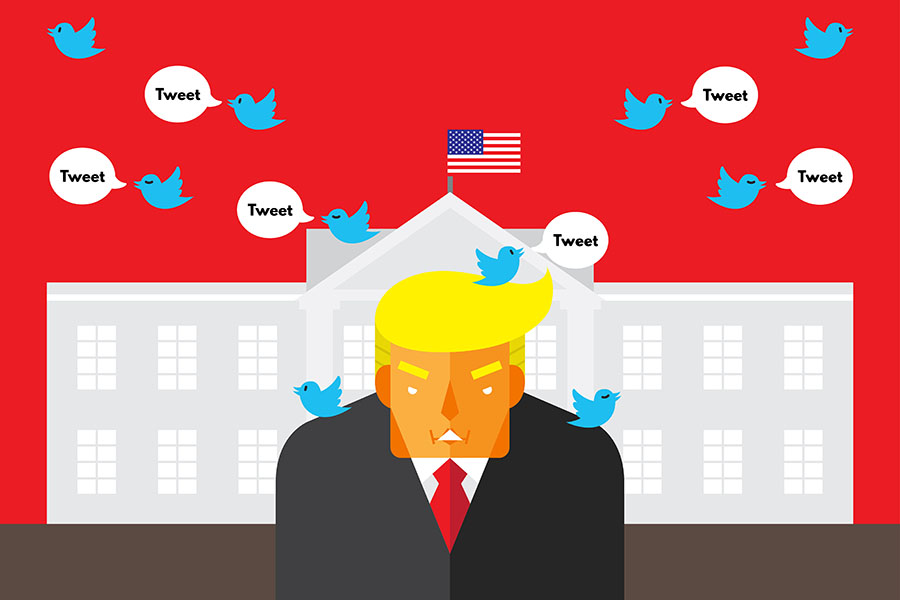 
Amid the riots and rhetoric in the aftermath of George Floyd killing, for a brief moment, the debate on regulation of social media was brought to the fore because of a public spat between the CEO of Twitter and the President of the USA. Though the issue was very quickly overshadowed by the riots, the spat did its job in nudging the regulation debate in an undesirable direction – framing social media regulation as an issue of sovereignty rather than an issue of fundamental rights. Ironically, at the core of the spat itself are the democratic principles of civil rights and freedom of expression. The fundamental argument in the regulation debate is that social media could potentially undermine sovereignty and hence should be subject to more legal checks and balances.  Quite glaringly, the regulation debates, which are led by legal and political experts, have ignored the democratizing potential of social media.

The basic premise and promise of social media is the transfer of power to control public discourse from the organized mass media to loose coalitions of ordinary citizens. Ignoring this and framing social media as a tool that domestic and foreign malefactors use to infringe upon the sovereignty of the State can lead to regulatory overreach. Such overreach could lead to failure of social media to fulfil the promise of democratization of public discourse. We draw attention to the need to take a holistic approach to social media regulation, recognising at all times the democratizing potential of social media. The Trump-Twitter spat can be seen as a struggle for control over public discourse. President Trump’s Executive Order is widely seen as diluting the provisions of Section 230 of the Communication Decency Act, 1996 that protects digital intermediaries, such as Twitter, Facebook, etc., from liability for the content posted on their platforms. Even as the Executive Order is being passed, Twitter made a couple of unprecedented moves that showed that they are not taking the beating with their guard down. Two days before the Order was signed, Twitter flagged a tweet by President Trump on mail-in ballots, drawing attention to the facts of the matter. On the day the Executive Order was passed, Twitter labelled another tweet by President Trump as promoting violence. Because the actions of Twitter happened around the same time the President signed the order, it possible that these events may affect how the whole regulatory exercise is perceived. Specifically, there is threat of nudging the sovereignty frame, by positioning regulation as a State vs digital intermediary issue, putting citizens on the side-lines. It is pertinent to ensure that the citizens’ interests are always kept at the centre of the debate on regulation of social media. Social media has enabled citizens gain some control over the public discourse. Prior to the advent of social media, the mass media organizations and the individual journalists had effective control over public discourse. Social media enabled ordinary citizens to gain some control through establishing wide social networks and contributing content to public discourse. We have studied how social media is changing the structure of control over public discourse in India. We investigated into who has the power to control public discourse on Twitter and studied 12 different courses in India like discourses on Rafale deal, EWS reservation etc. There are two ways the power of a Twitter user is measured – number of followers and number of retweets to content. We identified those who are in top ten in terms of number of followers and in terms of number of retweets. These users are then classified based on occupational categories. The graph below shows that across occupation groups, there is disparity in terms of number of followers and number of retweets. While media organizations lead in terms of number of followers in all the 12 discourses, they lead in the number of retweets in only 2 discourses. On the other hand, political leaders, political activists and users from other professions get higher retweets in proportion to their followers. There are four interesting observations from this study. Firstly, those who control public discourse in traditional media ecosystem, i.e., media organizations and journalists, have higher number of followers in social media as well. Secondly, there is disparity between number of followers and number of retweets. Thirdly, this disparity is in the favour of those who did not control public discourse in the traditional media ecosystem. Finally and most importantly, across discourses different users lead in number of retweets, which we call engagement. Specifically, the users advocating a specific issue are the ones who lead in engagement with content in the discourse on that issue. Thus there is transfer of power to control public discourse to politicians and other citizens who take up advocacy of issues. This transfer is fluid, in the sense that different set of users control the discourse on different issues. As a result, social media promotes pluralistic public discourse with space for expression of diverse opinions. 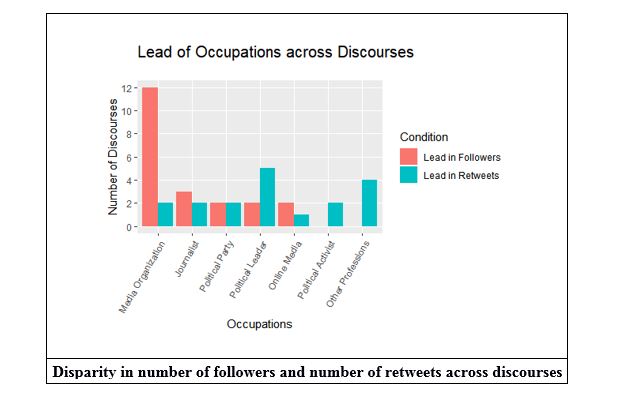 The flexibility in the power structure of public discourse, paved way to struggles between some emerging players to grab absolute control of public discourse and solidify the structure. We frame the recent events in USA as a struggle between two emerging players in public discourse – political leaders and digital intermediaries, to gain control over the public discourse. Trump wants to impose restrictions on Twitter content through regulatory arm-twisting. Twitter wants to control Trump’s ability to communicate with his base by labelling his tweets. It is to be noted that Trump and Twitter had a symbiotic relationship over the last decade as they emerged as major players in public discourse. We see a similar pattern in India as well. Politicians and political parties that captured significant space in public discourse through their organized social media management and IT cells, call out for boycott of various social media platforms whenever they feel that the content in that platform is against their political agenda. In a sense, these political players are okay with the platform as long as the citizens using that platform tilt the discourse in their favour but want to regulate it the moment the sentiment tilts the other way. Transferring the control to politicians can lead to definite and rigid bias in public discourse. The platforms are also equally likely to be biased if given control. The very acts of Twitter in the Twitter-Trump spat are arbitrary. Add to that the fact that Facebook did not take such actions even though the same messages are posted by Trump’s staff on their platform. Making things even worse, facing backlash for inaction, Facebook labelled posts from State-sponsored foreign media and also defended their policy citing that they labelled violent posts made by politicians in India in February. The platforms’ responses are varied and equally arbitrary. Transferring control to them is also detrimental to having a pluralistic public discourse. Even as social media moves towards fulfilling its promise of democratizing public discourse, new players are gaining power over public discourse. It is in the interest of these players to gain absolute control of this new and powerful medium. As these players struggle to gain control, the problems associated with social media are being framed as threats to sovereignty of nations. While sovereignty is indeed being challenged, it should not distract us from the original promise of social media – the democratizing role of social media. Though social media is not without problems, we call for putting trust on the citizens to respond effectively to these problems and to solve the problems collectively.  Sunil Reddy Kunduru is a student of PhD program in Information Systems at IIM Bangalore; Rajendra K Bandi is a Professor of Information Systems at IIM Bangalore.