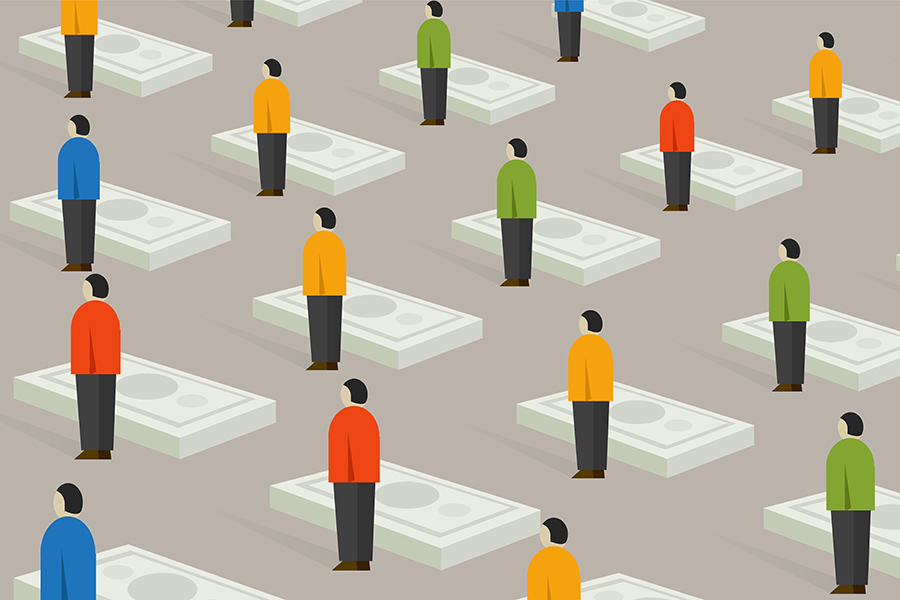 A package of basic wealth can protect people, especially the poorest. Image: Shutterstock

Do we need to work to live well? If you look at the tiny sliver of the top 0.001 percent—their families often do not do market labour. They live off the rents they raise from their accumulated capital. A few of them may be self-made, but the larger mass of the wealthy are the inherited folks. They are the landlords. If we do not question the inherited entitlement of the rich—the Trumps, for example—why do we question such a desire of the poor?

The coronavirus pandemic has taught us that some occupations are more essential than others. We need the farmers, the sanitation workers, the doctors and nurses, more than the landlords at this moment. Yet, the landlords and the rent-seekers hold significantly more wealth than the essential workers who live vulnerable lives—paycheck to paycheck. There is something sick about such a system, where the classes that do not work preach the gospel of work to those who do. "The poor are lazy," they say, while they live off rents.

People have identified and stated this irony, and the response to this irony has varied. Marx advocated for communism—a proletariat revolution against the capitalist rent-seekers to socialise the means of production. But by collectivising ownership, communism (Marxist-Leninism) made states overbearingly autocratic, directly leading to its decline.

We have learnt from the past that the best response to the above irony is not communism. Over the last decade, new ideas have emerged to tackle this problem of unfair inequality. The first idea is that community support is an essential pillar of the social support modern economies need. While communities matter and their importance can not be undermined, yet they can help the vulnerable only in limited ways. In countries like India, community matters probably too much. While a majority of Indians are unable to raise emergency funds during a crisis, among those who can raise such funds almost half of them get it from their family and friends. The problem is that poor people have poor communities and rich people have rich communities.
The second idea is of universal basic income, which posits everybody should get a monthly check from the government that is large enough for them to live just fine—whether or not they work. This idea seems to be a closer response to the question—does a person have a right to live well even if they refuse to labour?

Basic income proponents say yes, yet there remains a problem. This system creates a dependency on the government. Basic income is not a right, it is only a handout. As long as the government is charitable the public will get that income. If the government and its ideas change, the public will once again be deprived of such basic income. Basic income still does not address a fundamental problem. It is wealth, not income that leaves millions vulnerable and exposed to uncertainty. The rent-seekers get a good deal not because of their high incomes, but because they have wealth—inherited or not—that they can seek rent off.

Hence, a way forward—distinct from communism, community orientation or basic income—is the path of universal basic wealth. We need to create such conditions that nobody is compelled to work just because they have rent to pay. Such work-so-you-can-pay-the-bills is a form of wage slavery that we need to address today. We need to develop the idea of personal sovereignty, where all citizens of a country have ownership over some substantial property or wealth on which they can build their lives as they please.

The idea of basic wealth can rest on three social endowments that every adult can be gifted unconditionally with:

The coronavirus pandemic offers us a chance to relook at how we support each other. Basic wealth in the form of three endowments—a house, some savings, and emergency funding—can help in reducing vulnerability in the lives of people, and turn them into their own little sovereigns.

It is possible that some say these ideas are costly or difficult, but when implemented on a war footing, building housing to shelter all is not a radical idea. Singapore is close to achieving such universal housing. Similarly, unconditional basic income to children which can be accessed when they grow up, maybe more effective—better targeted and affordable than universal basic income, cash transfers or subsidies. In the same way, unconditionally insured emergency healthcare funding is a low hanging fruit that can help bring millions of lives out of fear and insecurity. None of these ideas is radical, but together these solutions can provide a new deal—a package of basic wealth that can protect people, especially the poorest.Prof. Prateek Raj is faculty from the Strategy area at IIM Bangalore.