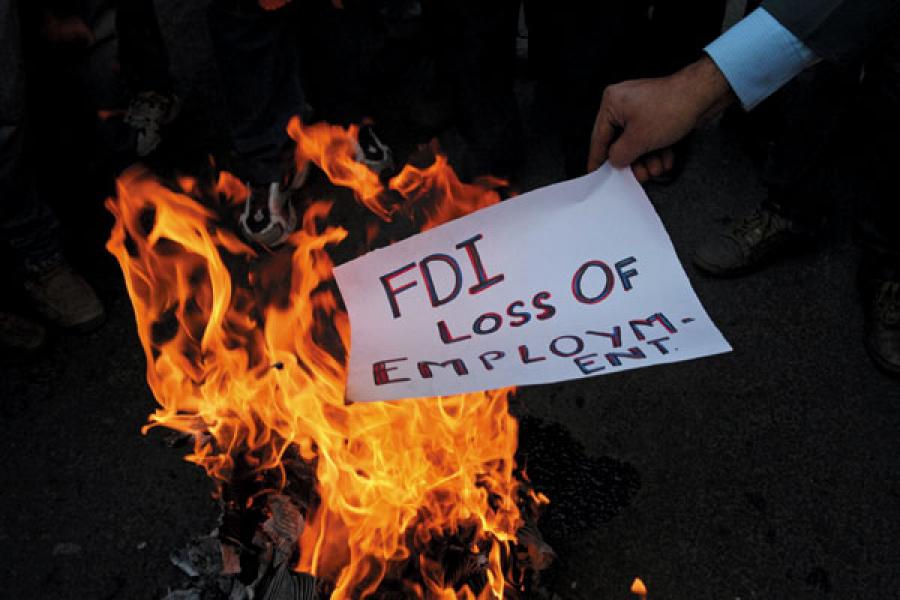 Image: Mukesh Gupta/ Reuters
SHOP TALK A protest against Foreign Direct Investment (FDI) in the retail sector. Though the Centre has allowed single-brand 100 percent FDI in retail, there is a rider that 30 percent of purchases have to come from within and from small- and medium-scale fi rms

The first thing the government needs to do is cut the deficit because how the RBI formulates the monetary policy depends on what the deficits are, and deficits do crowd out private investments.

Another immediate step is that the decision-making process has to start moving back to normal. In the last year or so, lots of decisions simply were not made because of corruption scandals—that was one of the most important reasons for this slowdown from about 8.5 percent to 7 percent. The government machinery has to make its normal decisions rather than be in the fear that if it makes a decision there will be allegations the next day about corrupt decision-making.

Next, a lot of reform agenda has pretty much stalled through the last seven-eight years—the immediate one is a clear one, multi-brand retail foreign investment. Though there is single-brand 100 percent direct foreign investment in retail, they put in a rider that 30 percent of purchases have to come from within and from small and medium-scale firms. You have to be clean about it. Ultimately, you have to let companies and firms operate based on efficiency and competitive conditions. You see, Ikea [the international home products company] was going to come in, but they had to rethink because they weren’t sure whether they could source 30 percent of their purchases from small and medium firms locally. So, the impact of a reform doesn’t really happen. I’m not sure if politics dictated this, or muddled-up thinking did. In any case, the commercial decisions should be left to commercial considerations rather than turned into social programmes.

Every policy doesn’t have to be a social programme, which is what the government seems to try to do. For example, if private hospitals come in, the government says 25 percent [of care provided] should be for the poor. If private schools come in, then there should be a percentage of children from poor families. While socially India has to also progress, you have to use different instruments that target the poor.

Arvind Panagariya is a professor of economics and Jagdish Bhagwati professor of Indian political economy at Columbia University. He was formerly the chief economist at the Asian Development Bank and holds a PhD in economics from Princeton University.

Tweets by @forbes_india
A New Way to Measure Greenhouse Gases
Sitaram Yechury: The Government Should Get Priorities Right