Sitaram Yechury: The Government Should Get Priorities Right

India Budget 2012: Sitaram Yechury on how the finance minister can balance the politics of the poor with the policies for the economy 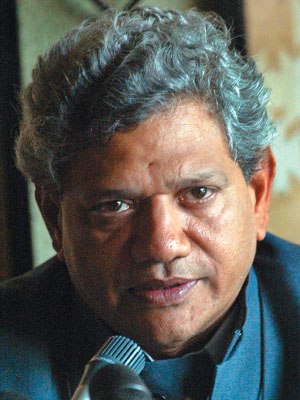 Image: Gopal Chitrikar/ Reuters
Sitaram Yechury is an economist by training and a Politburo member of the CPI(M) since 1992

As far as I am concerned the solution is very simple. During the last three years, the tax foregone through concessions given to the corporates and high-end income payers as well as the exemptions in the customs and excise duty amounts close to Rs 15 lakh crore. This is according to the Budget figures put out by the finance minister himself.

Now, your fiscal deficit this year is projected at Rs 4.6 lakh crore—even if this goes over to Rs 5 lakh crore, it is just one-third of the concessions given over the last three years. Now if you stop these concessions and collect what is legitimately due to the government then you don’t need to raise any new taxes. Nobody is saying put any extra burden [in terms of new taxes to shore up the fiscal deficit]. Just collect what is legitimately due [to the government] and you will be able to tackle the fiscal deficit on the one hand and carry out your programmes for the aam aadmi, on the other.

So, that is what the government has to decide. Whether it wants to overtly continue with all the sops for the rich and treat the sops to the rich as incentives for growth and treat subsidies as the burden to the economy. Until that mindset changes they can’t meet either of the objectives. If they don’t change it they will only be compounding the confusion. It will help neither the economy nor the poor man.

In my opinion, all the resources that are marshaled by cutting down these tax beneficiaries must be utilised for building your infrastructure. No amount of liberal reforms will help the flow of capital in the country, especially in the background of the global crisis, when there is a squeeze on capital availability to flow into the other countries. In such situations, the capital can flow only if it finds lucrative returns for which, in turn, infrastructure is an absolute essential. So, the priority in terms of policies must be to build this infrastructure. Now, the vicious circle—that to build the infrastructure you need resources and to get resources you need infrastructure—can only be broken when we learn from the experience of all other countries, from the US to China. No country has built the infrastructure through external funds or through private funding. It has to be primarily state financed. And for that the resources can be marshaled if you do what I said earlier.

Tweets by @forbesindia
Arvind Panagariya: The Immediate Steps to Reform
Janmejaya Sinha: How to Kickstart Second Leg of Reforms