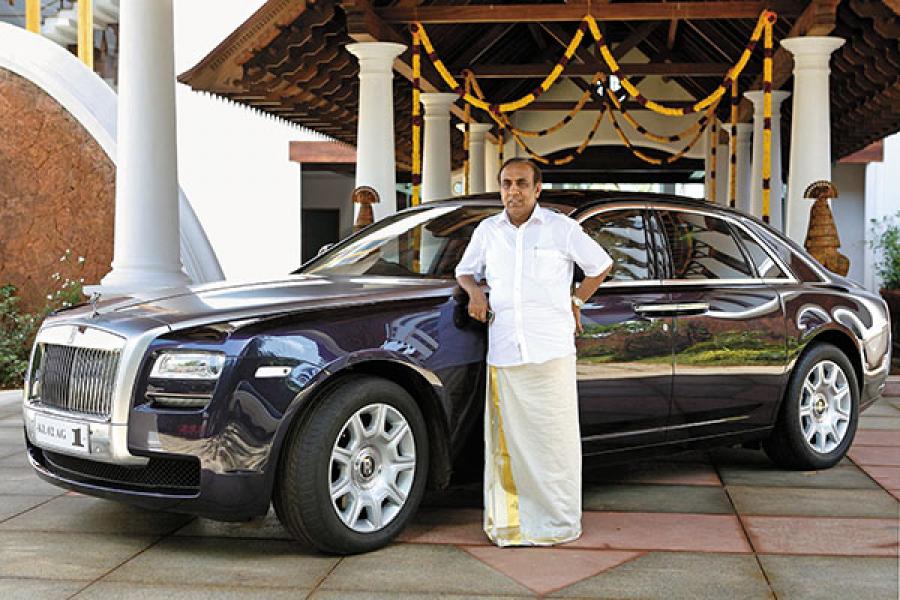 Ravi Pillai
Chairman and MD, RP Group of Companies
Age: 60
Rank in the Rich List: 34
Net Worth: $1.7 billion
The Big Challenge Faced in the Last Year: A huge shortage of skilled workforce. To overcome this, is planning to set up technical training institutes in India, Middle East and other countries.
The Way Forward: Pillai wants to double turnover of $3 billion over next three years. Will focus on expansion in Africa, Middle East and India.


On September 2 every year, Ravi Pillai, 60, the chairman and managing director of the $3 billion RP Group of Companies, performs the udayasthamana pooja at the Tirupati temple in Andhra Pradesh. Whichever part of the world he is in, Pillai flies into Tirupati the previous night. He wakes up at 4 am and heads to the temple. Udayasthamana literally means from dawn to dusk; that’s how long the devotee must pray to the lord. Only five to seven people are allowed in the sanctum sanctorum where the pooja is conducted. And you cannot book one today if you want to—the waiting time for an udayasthamana pooja is more than ten years.

“I booked this pooja 30 years ago,” says Pillai. “And I have been doing it every year since then. Whatever I have achieved in my life, it is because of my hard work and the blessings of god. I couldn’t have done anything alone.”

The gods seem to have taken notice of his devotion. Consider how well he has done for himself: This year, Pillai has entered the Forbes India Rich List for the first time, at No. 34 with an estimated net worth of $1.7 billion.

And now look at his back-story.

Born into a family of farmers near Kollam in Kerala, Pillai says that he had always wanted to become an entrepreneur. As a first step, he started a chit fund. While that proved profitable, he soon realised there was more to be gained from the booming construction sector. In the early 1970s, he began doing sub-contracting work for companies in the chemical and oil refinery business. His journey, however, came to a sudden halt when the labourers went on strike. Pillai says he was disappointed but, in many ways, this was a turning point in his life.

BUILDING TO LAST
In 1979, Pillai moved to Saudi Arabia with whatever little money he had saved. This was also the time when many ‘Malayalis’ from Kerala were getting lured by opportunities in the Middle East. “I didn’t know anybody there. And this was the first time I had gone abroad,” says Pillai. While he was clear that he wanted to stay in the construction business, it wasn’t easy to get started. For the first two years, he worked with a businessman called Abdullah Jufan. “Our partnership did not work out. So I left and started working with another businessman called Nasser Al-Hajri,” says Pillai.

It is a partnership that has stood the test of time.

Headquartered in Al-Khobar, Saudi Arabia, today Nasser Al-Hajri Corporation is one of the largest general construction contractors in the Middle East. It was founded in 1978 and was a small company at the time Pillai joined it. Al-Hajri, the original promoter, is the CEO. (Pillai has a 50 percent partnership in the company; later he formed RP Group of Companies and Nasser Al-Hajri Corporation is a vertical under it.)

Pillai, who is the managing director of the company, says the venture started with around 120 people, all of them recruited from a town called Nagercoil in Tamil Nadu. “The real growth took place around 1983. We started getting sub-contracting work and our first project was to construct an underground parking space for aeroplanes, for a French company,” he says. “Then we got a project for the Royal Terminal [at Riyadh airport], followed by other petrochemical plants and refineries.”

The major contributor to Pillai’s growth has been the industrialisation of the Kingdom of Saudi Arabia and the construction boom in the Middle East. Starting 1975, the country began work on Jubail, a small fishing village which is the largest industrial city in the Middle East today. In 1976, Saudi Arabia formed Saudi Basic Industries Corporation (SABIC), a diversified company with interests in chemicals, petrochemicals, fertilisers and steel. Nasser Al-Hajri Corporation piggybacked on the growth of SABIC; it was and continues to be the preferred contractor for SABIC’s industrial projects.

But it wasn’t like companies were queuing up to give him projects. He had to battle enough scepticism. Pillai says that the impression of Indians in the Middle East at that time was that they were only fit to become cooks, drivers or gardeners. Add to that, the construction sector was dominated by Korean companies. “People would say that Indians can’t do it. With every project, I showed that we could do technical work too,” says Pillai. “We were better in both quality and cost. In fact, I have delivered many projects with just an Indian workforce.” The RP Group of Companies today employs around 70,000 people, more than 45,000 of whom are Indians.

FRESH TERRAIN
Pillai hasn’t stopped there. In the last 35 years, he has gone beyond construction and now has interests in hospitality, education, retail and hospitals as well. There is also a tours-and-travels business and a trading company in Dubai. While he is based in Bahrain, Pillai has made significant investments in his home state, Kerala (Upasana nursing school, Raviz Hotel & Resorts, K Mall in Kollam and RP Mall in Kozhikode). He was awarded the Pravasi Bharatiya Samman Award in 2008 and the Padma Shri in 2010.

In 2011, Pillai bought Leela Resorts, Leela Group’s Kovalam beach property in Kerala, for about Rs 500 crore. CPK Nair, the chairman of Leela Palaces, Hotels and Resorts, says that he is very fond of Pillai. They first met in 2010. “I had never heard about him. I saw him for the first time when I was getting the Padma Bhushan. He was getting the Padma Shri and had come with around 100 people to collect the award,” says Nair. A year later, Nair found himself in trouble. His company, Leela Venture, had accumulated debt of Rs 3,830 crore at the end of FY11 owing to capital expenditure of over Rs 4,000 crore. He needed to reduce debt urgently. The idea of putting the Kovalam property on the block was on his mind but it was a prized possession—he wasn’t willing to sell it cheap.

But the word was out. In July 2011, Pillai approached Nair to buy the property. Pillai says that each time he visited Kerala, he was disappointed at the quality of hotels there. “That’s why I wanted my own hotel to stay in with my friends and family. And I love the sea,” he says. He met Nair in his office in Mumbai and the two agreed on a deal. “While I was initially hesitant, I sold the property to him because he gave me a fair price. We still manage that property for him,” says Nair.

Pillai is obviously aware of his success. But, at 60, he also knows that there is only so much he can do. For more, he has pinned his hopes on his children. His son, Ganesh Ravi Pillai, who has worked with Citibank and has enrolled for his MBA at IE Business School in Spain, will join him next year. “I am also looking forward to my daughter [Dr Aarathi Ravi Pillai], who’s a doctor, joining the business. They will drive things,” he says.

They have big shoes to fill and bigger dreams to fulfill. Their father aspires to double his existing business (turnover) over the next three years. But, while he waits for them to join, he isn’t resting either. “There is still a lot of potential in different parts of the Middle East. We are growing in Africa and India,” he says. “I am travelling all the time, looking for new opportunities.”

Show More
Thank you for your comment, we value your opinion and the time you took to write to us!
Comments 59