The 80-20 principle of wealth distribution is fast breaking down within the Forbes India Rich List. While the top 20 have seen their money stagnate, the remaining 80 have seen tremendous growth in their fortunes 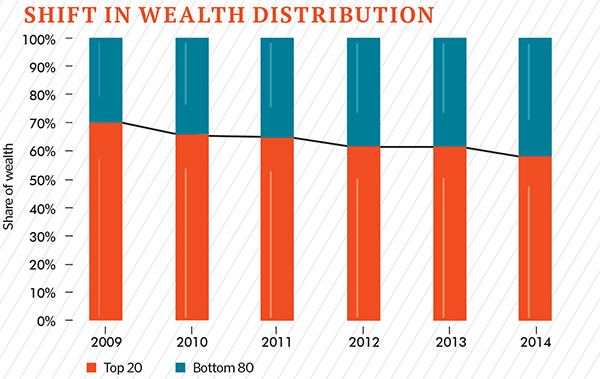 The power laws that govern statistics and numbers are breaking down: In 2009, the top 20 people on the Forbes India Rich List accounted for 70 percent of the total wealth of the 100; in 2014, the figure dropped to 58 percent.

In effect, wealth that was concentrated in the hands of a few is now spreading across many.

A 2013 paper by Michal Brzezinski, assistant professor of economics at the University of Warsaw, looked at the Forbes Rich Lists from the US (1988-2012), Russia (2004-2011) and China (2006-2012), and concluded that Pareto’s Principle (one of the power laws) was applicable less than half the time. Now, it seems, that the India Rich List is also experiencing a breaking down of this principle.

India is a growth market, providing entrepreneurs with plenty of opportunities. Some of them started their businesses only 20 years ago in software or pharmaceuticals, which require technical knowledge and a global outlook.

This has given them the advantages of high entry barriers and bigger markets. The top 20, already have a very high net worth as their base and so, it becomes difficult to grow as fast as the newcomers. 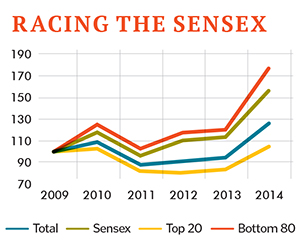 Some of the heavy hitters have seen their wealth fall since 2009. Many of these large-cap billionaires run diversified conglomerates and have been hit rather hard by the global slowdown.

If the big players aren’t growing, it slows down the growth rate of all the 100 on the list. Therefore, in relative terms, the Rich List has underperformed the Sensex (See Racing the Sensex chart).