Duo loses almost a billion dollars of their combined personal wealth, largely on account of higher fuel prices and a depreciating rupee 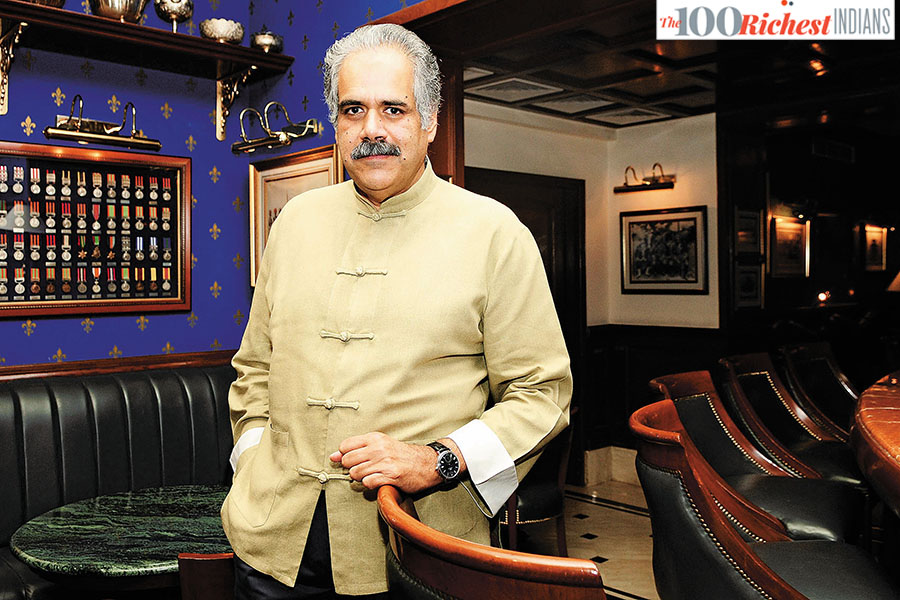 Bearish investor sentiments for the InterGlobe Aviation stock saw the father-son duo of Kapil, 86, and Rahul Bhatia, 58, lose almost a billion dollars in their combined personal wealth. InterGlobe Aviation owns and operates India’s largest and most profitable airline, IndiGo. The former is executive chairman while the latter is group managing director of InterGlobe Enterprises, which has a 38 percent stake in InterGlobe Aviation; they are ranked 41 on the 2018 Forbes India Rich List, with an estimated net worth of $3.55 billion. Last year, they were at No 31 with a fortune of $4.4 billion.

This is the first year that the Bhatias have seen their personal wealth fall, after having seen it more than triple from $1.29 billion in 2012 to $4.4 billion last year. Clearly, InterGlobe Aviation’s share price, which fell from ₹1,250 apiece in September 2017 to about ₹850 apiece this September, has had a direct impact on their wealth.

While InterGlobe Enterprises has other business interests spanning hospitality, real estate, IT and BPM services, the bulk of Bhatias’ wealth comes from their listed airline entity. IndiGo is arguably among a few highly profitable airlines globally. “But there has been a sharp dip in profitability since January 2018,” says Kapil Kaul, CEO, CAPA South Asia, an independent aviation consulting, research and knowledge practice firm.

On October 24, IndiGo posted a net loss of ₹652.13 crore for the July to September quarter of FY19 compared to a profit of ₹551.56 crore a year ago. However, the airline reported revenues of ₹6,514 crore, an 18 percent growth over the same period a year ago.

“Aviation in India is facing significant pressures from high fuel costs, rupee depreciation and intense competition, all of which have impacted our profitability this quarter,” Rahul Bhatia, interim chief executive officer, IndiGo, said in a press statement. Forbes India reached out to him for a comment, but there was no response till the time of going to press.

In the April to June quarter, IndiGo reported a meagre ₹27.8 crore in profit compared to ₹811.1 crore in the same period a year ago.

Besides, for FY18, the company’s board of directors recommended a paltry dividend of ₹6 per share as against a payout of ₹34 per share in the previous fiscal. The decision was taken to bulk up the company’s free cash reserves for the outright purchase of aircraft which, in the long run, would reduce operating costs and result in higher profitability. It also reflected a change in IndiGo’s fleet acquisition strategy, which was to purchase aircraft on a six-year sale and leaseback model from lessors.

Started in 2006 by Rahul Bhatia and Rakesh Gangwal, a citizen of the United States of America, IndiGo operates over 1,200 daily flights and connects to 49 domestic and nine global destinations. It commands 41 percent share of the domestic air passenger traffic in India.

“Indigo is a clear success story, which has been built on razor-sharp focus on a few things and doing them well across all aspects of their business,” says Harish HV, independent consultant and former partner at Grant Thornton India.

Gangwal, 65, who holds a 36.68 percent stake in InterGlobe Aviation, is part of Forbes’s The Billionaire List for 2018 with an estimated net worth of $3.3 billion. “Both the promoters have created a world-class airline, highly profitable and valuable. IndiGo has been exceptional both in strategic thinking and execution,” says Kaul.

That said, according to Kaul, there have been “significant developments” at IndiGo over the last 12 to 18 months, which have further accentuated the bearish investor sentiments. “There has been a total management recast; they had [and continue to have] issues with their Airbus 320 neo aircraft engines,” notes Kaul. “Also, a series of customer-related issues resulted in negative press.” 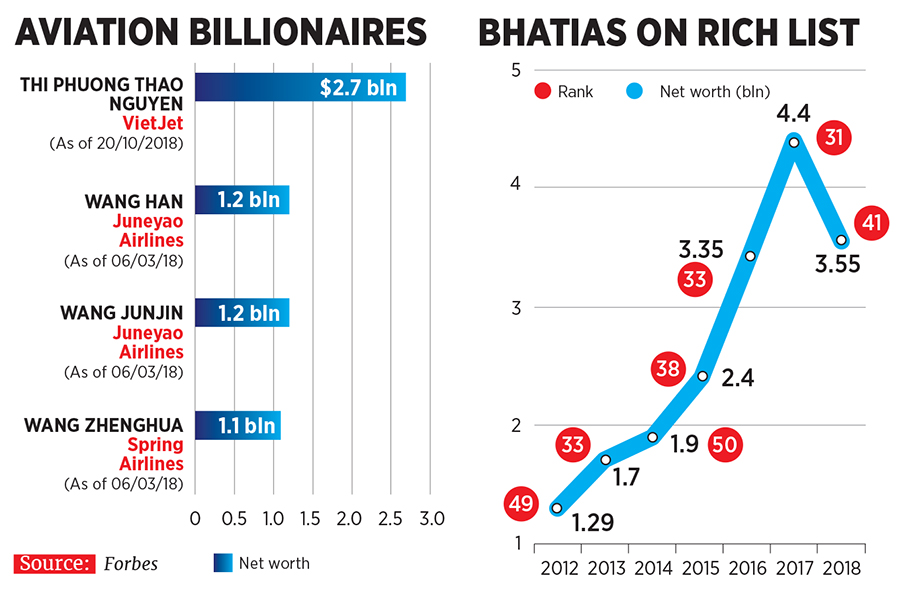 In November 2017, IndiGo was criticised over an incident in which its security staff manhandled a passenger at the New Delhi airport. “In a video widely shared on social media and televised on local news channels, at least two IndiGo staff members can be seen pinning a passenger to the ground after an argument on the tarmac,” the international newswire Reuters reported.

“At some point, when you get scale and in a market like India where some people have short fuses, a few such incidents do happen,” adds Harish. The problem, he says, is that passenger-related incidents get high visibility [in the media] and IndiGo needs to manage their response fast. “That is something they have to work on.” 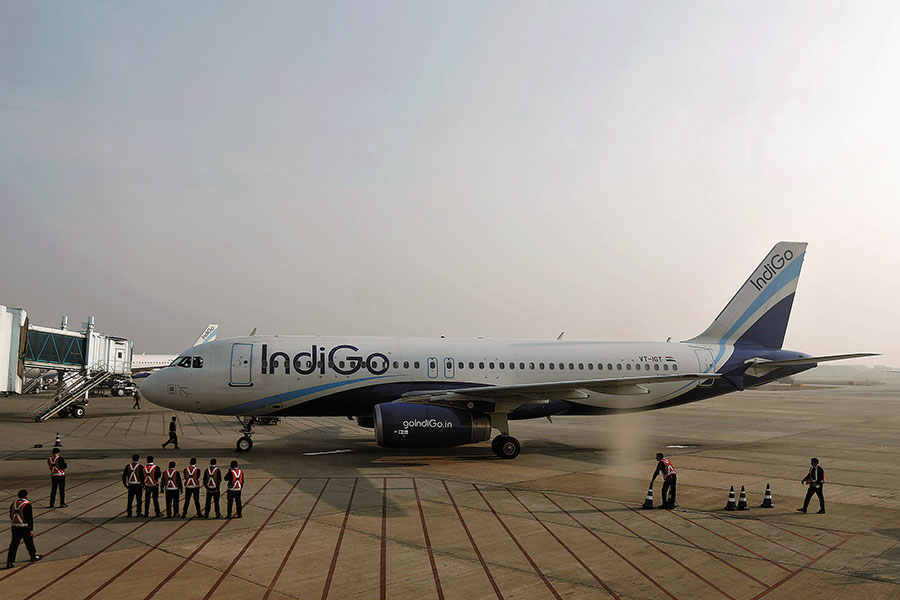 IndiGo posted a net loss of ₹652.13 crore for the July to September quarter of FY19 compared to a profit of ₹551.56 crore a year ago
Image: Adnan Abidi / Reuters

Despite a ₹600 crore quarterly loss, IndiGo has an impressive and enviable balance sheet with cash reserves of ₹13,164 crore. With that war chest, many aviation analysts and airline executives of competing airlines believe that IndiGo has carefully orchestrated a low-fare environment, which is hurting all Indian airlines. Some, like Jet Airways, are in dire need of capital to stay afloat, after having reported a first quarter loss in excess of ₹1,000 crore. “I don’t know yet if IndiGo’s pricing is strategic, but they are free to pursue a pricing strategy that delivers corporate objectives. They have the balance sheet to play a strategic game,” says CAPA’s Kaul. “I see IndiGo closer to a 55 percent market share over the next two years, which means a total strategic domination.”

In the same breath, Kaul adds, “It is critical for IndiGo to focus on technology and create an engaging futuristic digital platform; set up a research and development centre with data analytics as a central pivot; and more importantly, revitalise the brand to align to their global ambitions.”