Riding on digital services, the IT services bellwether has made some founders richer, but recent whistleblower allegations of corporate governance lapses came as a bolt from the blue 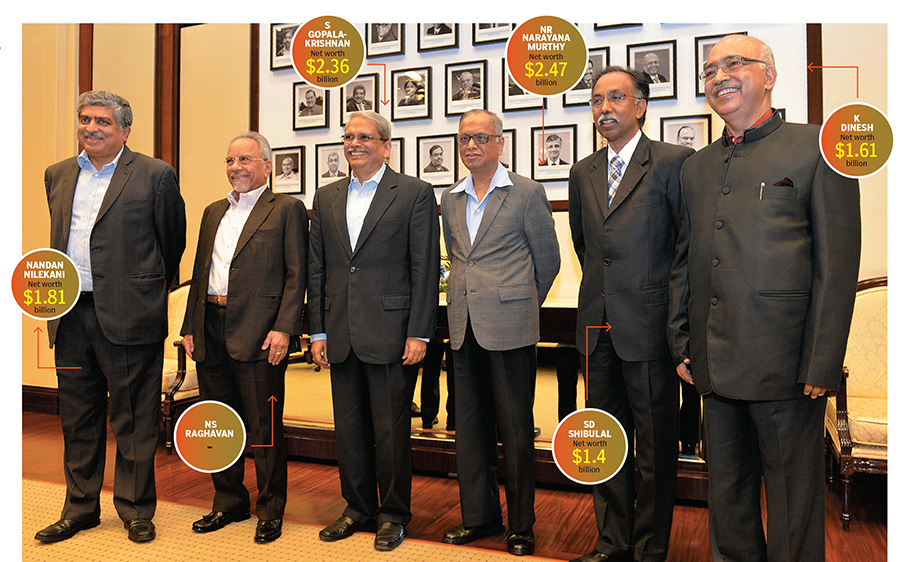 When Salil Parekh, CEO of Infosys, reported the Bengaluru-based IT services giant’s latest quarterly results on October 11, he was keen to draw attention to a small, but significant, milestone. The company was reporting its fourth consecutive quarter of double-digit growth in constant currency. Investors clearly took note, with the Mumbai-listed company’s stock rising by over a fifth in the first nine months of 2019.

Consequently, it boosted the value of the holdings in the company of its founders, who saw their rankings rise in the 2019 Forbes India Rich List. Founder NR Narayana Murthy’s rank rose to 51 on the list from 73 in 2018, as his personal worth increased to $2.47 billion from $2.2 billion. Co-founder Senapathy 'Kris' Gopalakrishnan’s rank increased to 55 from 79, and his personal wealth rose to $2.36 billion, a 13.6 percent increase over 2018. Nandan M Nilekani’s ranking improved to 78 from 80. K Dinesh and SD Shibulal, who weren’t on the 2018 list, made the cut in 2019 with rankings of 89 and 100 respectively, with net worth of $1.61 billion and $1.4 billion respectively. A whistleblowers’ complaint against Parekh, however, was lurking just round the corner.

“We had a really strong, robust Q2 with good performance all around in all of our parameters,” Parekh told reporters in Bengaluru on October 11, as the company reported 11.4 percent constant-currency growth overall for the three months ended September 30, 2019, compared to the year earlier, and 38 percent constant-currency growth in its digital portfolio.

This nearly four-times faster growth in digital services, compared to the company’s overall growth rate, reflects the direction in which Infosys and the IT industry are evolving. Digital services are becoming increasingly central to the contracts won by the top companies in the country’s IT services outsourcing sector. For Infosys, digital services have grown to account for 38.3 percent ($1.23 billion) of its revenues, compared with 31 percent a year earlier.

The company’s operating margins also improved by 1.2 percentage points over the previous quarter to 21.7 percent, despite compensation increases that kicked in during the quarter, said Parekh. This was due to an increase in utilisation (the proportion of staff doing billable work), reduction of staff needed to provide services at client sites, and tight overall cost controls. The company also saw “very good, strong, large-deals performance,” with $2.8 billion in large contracts struck during the second quarter. This contributed to making the ‘total contract value’ of large deals in the first half of the current fiscal year 75 percent higher than the comparable figure for the same period last fiscal.

Even as investors looked forward to a period of stronger growth, uncertainity returned to the IT bellweather in the form of complaints about the CEO’s handling of large contracts. A group of whistleblowers calling itself ‘Ethical Employees’ accused Parekh of being “unethical” in the manner in which he has pushed through contracts with customers including Verizon, Intel, ABN AMRO and in certain joint ventures in Japan. After the complaints became public on October 21—a day markets were closed in Mumbai—Infosys shares lost close to 18 percent of their value by close of trading on October 23, although at the time of writing in the first week of November it had regained much of the lost ground. Reassurances from chairman Nilekani in a call with analysts of a thorough investigation played a part in the recovery.

The problem with Infosys and all its peers is their inability to differentiate their services from each other’s. With technologies and their applications in solving business problems evolving at a rapid clip, clients are looking at technology driven innovation very seriously,” says Ashutosh Sharma, vice president and research director at Forrester, a consultancy. “Enterprises are often complaining that most of their existing partners are not very proactive when it comes to bringing innovation. This is making them look for alternatives and is chipping away from the wallet share of these service providers.”

India’s top IT companies are responding by trying to accelerate the growth of their digital services. At Infosys, in one deal it focussed on user experience, based on the “front-end of our digital thinking”, said Parekh, and worked with a global confectionary company and redesigned how their end users interacted with the company, including improving an ecommerce element. In another instance, Infosys worked with one of the top three cloud computing providers for an American client and built a “public cloud transformation program” to migrate both existing and new services that the client offers to the cloud.

Overall, there are three areas in which Infosys is becoming increasingly relevant to clients in providing digital services: User/client/employee experience, data analytics, and cloud computing. Many of the contracts the company is winning are “modernisation” deals in which the digital component plays a vital role. In the September quarter, it launched a digital services centre in Arizona, US, and a cybersecurity centre in Bucharest, Romania. Therefore “the good news for us is that digital is becoming more and more central”, said Parekh, to the services that Infosys is offering and the investments made by the company in this area are paying off.

Buoyed by its Q2 performance, and data on what the rest of the year is looking like, Infosys sharpened its forecast for the full year that ends March 31, 2020. It now expects revenues to rise to between 9 and 10 percent over the previous year, compared to its earlier forecast of 8.5 to 10 percent.

“Revenue growth with improvement in operating margins sequentially keeps the faith alive in Infosys’s recovery” through the fiscal that ends March 31, 2020, say analysts at Emkay Global Financial Services, a Mumbai brokerage. They were, however, “surprised by the fact that Infosys did not raise the revenue guidance at the upper end despite the confidence of strong order booking” as well as revenue performance in April-September 2019.

Perhaps one can’t fault Parekh and his top colleagues for being cautious in the face of growing uncertainty in the near future—from a potential slowdown in the US and the global economy, to the consequences of America’s trade war with China on Infosys’s top clients. The company’s recovery has also been five years and two CEOs in the making. It started with Murthy stepping in to hire former SAP executive Vishal Sikka as the new CEO in June 2014 to revive the company’s fortunes after growth at Infosys had stagnated and it was lagging rivals.

Sikka and his board’s relationship soured with Murthy, eventually leading Sikka to quit in August 2017. A board led by Nilekani named Parekh, a former Capgemini executive, as CEO of Infosys. Parekh, who took over in January 2018, is seen to have both built on the initiatives set in motion by Sikka and added to them, setting Infosys on the path to a digital services-led recovery.

“The biggest change at Infosys is the calming influence of a low profile but effective leadership that Salil Parekh has brought. It has stabilised the action that went on in the years leading up to his joining as CEO,” says Sharma of Forrester. “Infosys was trying too many things too quickly and its multiple power centres were not helping. They have pulled back from that path and have gone back to their conservative roots. It will help them in the short- to medium-term, but they will have to start innovating very soon otherwise they risk losing business to more nimble competitors.”

The latest quarterly results reflect the five-year long effort at a turnaround. And if the recovery continues, with an accelerated digital services-led innovation, Infosys’s founders will only see their wealth enhanced.

Tweets by @forbesindia
Obesity and lack of knowledge: Risk factors for Hypertension
TikTok's chief is on a mission to prove it's not a menace