It's not just evangelising a vision of inclusive India, but personally developing large chunks of the digital building blocks of that future 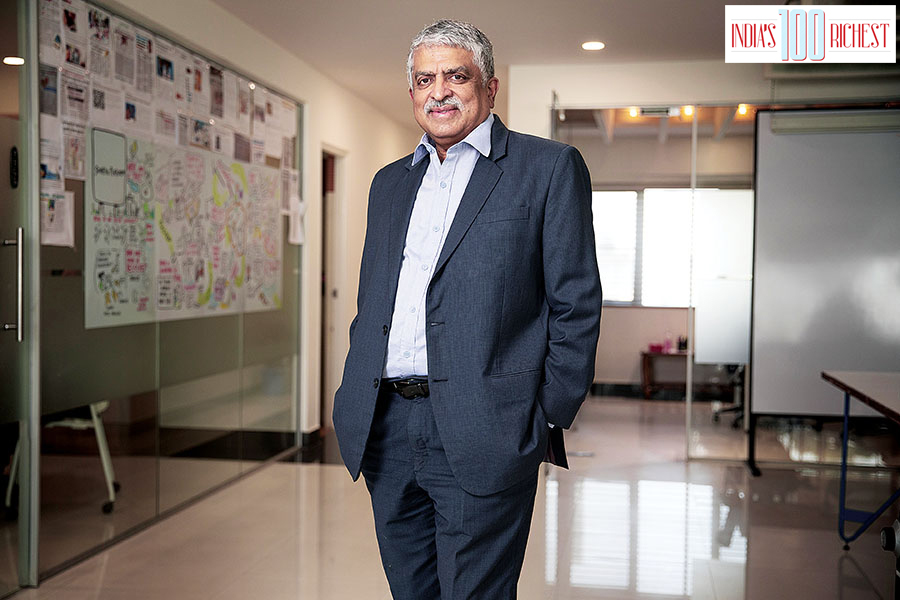 The stage was set in Mumbai, India’s financial capital, at the Jio World Centre, the city’s business district. People from world over were meeting to celebrate India’s fintech revolution and talk about what’s next. A senior official from the National Payments Corporation of India made a simple, almost cursory, announcement that Nandan Nilekani would speak for a bit. Nilekani, chairman of Infosys Technologies, but in the day’s context, chief evangelist of tech for an inclusive India, didn’t disappoint.

India, and specifically the Reserve Bank of India (RBI), “is showing the world how to combine regulation and innovation,” he said at the beginning of his brief 10-minute speech. He spoke of how the world is marvelling at India’s fintech revolution, with Aadhaar and the Unified Payments Interface (UPI), but ever looking ahead, added “this is just a part of the journey, there are a few things that are coming.”

In particular, the Account Aggregators system that the RBI is putting in place holds out the promise of making credit and lending as simple as sending a payment today, and will touch off its own set of revolutions, he said. Another big initiative is the Open Network for Digital Commerce (ONDC), which will allow India to disaggregate ecommerce with participation from literally everyone—retailers, supply chain businesses, payments companies, and so on—with a big impact on hyperlocal commerce. “This combination of credit with UPI, enabled by the Account Aggregator system and ONDC, will fundamentally reorder the supply chain of India,” making it more efficient and easier to get products and services to everyone, he outlined.

The day’s events included the launch of additional features on the UPI platform, including the ability to make payments via an “offline UPI” feature. And ever dreaming big, “today we have about 260 million people using UPI, and with the launch of offline UPI, I think we can add another 500 million users to the payments system,” Nilekani said. 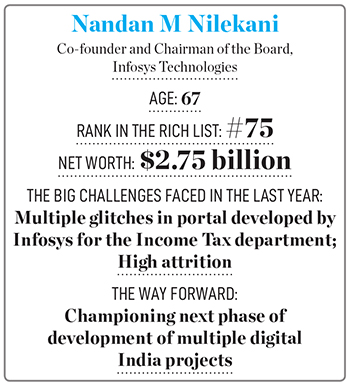 Today’s young, who communicate via memes, would relate to pictures of rope tricks, elephants, cows and snake charmers that were commonly used to parody India. In the last 30 years, those images have become obsolete, starting with the country’s economic liberalisation. And Nilekani has risen to become the best-known figure among a small elite who straddled private enterprise and public service to wow the world with what was possible in India—Sam Pitroda and Ashok Jhunjhunwala are others in that set, for example.

The world began to recognise this new India when, one day, an influential American thinker and writer came to visit Nilekani at Infosys and the charismatic Vivek Paul at Wipro, and went back and said, “the world is flat”. The writer, Thomas L Friedman, borrowed the idea from Nilekani’s observation that the global playing field was being levelled (because of the internet), as Friedman himself recounted in an interview with Wired magazine in 2005, when his book, The World is Flat: A Brief History of The Twenty-First Century, was published.

Long before Aadhaar, Nilekani, who was then CEO, president and managing director of Infosys, was selling a vision of India to the world that today is much more apparent to many.

“Nandan has the ability to imagine a better future in every aspect of samaaj, sarkar and bazaar that he focuses on,” says Sanjay Purohit, who led Infosys’s EdgeVerve unit, and was the chairman of the board of Infosys Consulting, the management and IT consulting practice within Infosys.

Purohit is also an advisor at Fundamentum, the venture capital firm, and chief curator at Societal Platform, an initiative of EkStep Foundation, co-founded by Nilekani and his wife, philanthropist Rohini Nilekani.

Nilekani can define an aspirational goal with a credible pathway to it, and energise and align all the relevant stakeholders in the ecosystem to pull in the same direction to achieve that goal, Purohit adds. “He not only connects the dots, but ensures that the picture gets completed. This bias for collaborative action, coupled with strategic thinking, is his biggest strength.”

Sanjay Swamy, co-founder and managing partner at the VC firm Prime Ventures, echoes Purohit’s thoughts: “The ability to think big-picture, and translate that to the finest levels of execution details in a holistic manner, including organisational and individual buy-in is something he does better than anyone else I’ve ever met,” he says. Swamy worked with Nilekani on mobile and applications strategy, during the early days of the Aadhaar project. 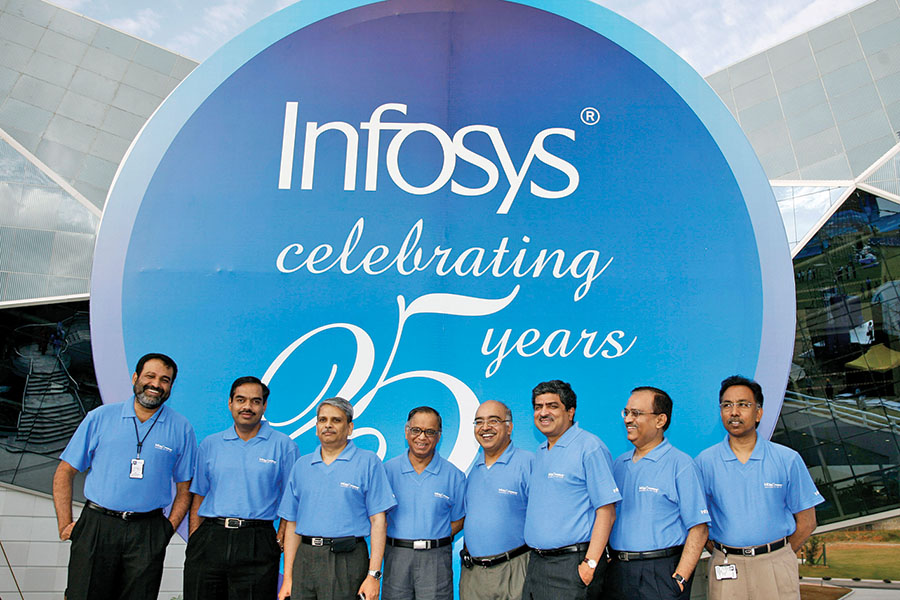 Nandan Nilekani (third from right), stands alongside other founding and board members of Infosys as the IT company commemorates its 25th year on July 31, 2006. Nilekani was then CEO, president and managing director of Infosys

Nilekani’s vision for India is entirely focussed on the principles of high-volume low-cost as a means to truly reach the masses, and on top of digital platforms, Swamy says. The Beckn Protocol, ONDC and AI4Bharat, are all ways of ensuring that the benefits of technology are rapidly scaled to reach the masses—all evangelised by Nilekani.

The Beckn Protocol is perhaps the least well-known project outside of tech circles, but is likely the most impactful of all work Nilekani has championed since Aadhaar. It is a set of rules, frameworks and software, including application programming interfaces (APIs), that act as ‘Lego blocks’ that can be combined in innumerable ways to allow businesses to inter-operate, explains senior tech lawyer Rahul Matthan in one of his newsletters.

If it succeeds, small retailers, for example, and buyers, can find each other without rent-seeking intermediaries.

Also read: Why an Indian owner of an elite football club could be a win-win

Nilekani’s contributions towards conceiving and implementing India’s digital building blocks—including Aadhaar, eKYC, eSignatures, DigiLocker, UPI, Account Aggregator, and the Consent Based Data Privacy Framework, “with a laser focus on high-volume-low-cost and mass inclusion, will leave a legacy of impact at a scale never seen before, not just in India but several other parts of the world,” Swamy says.

In some ways, all entrepreneurs are futurists, and tech entrepreneurs especially so, because they have to sell a vision of the future that only they can see before it becomes reality.

“Nandan’s biggest strength is knowing where the puck is going,” says Viral Shah, co-inventor of the programming language Julia, and co-author with Nilekani of the book Rebooting India. “He is able to see how the world will be five years, 10 years out, and build solutions that are ahead of their time.” 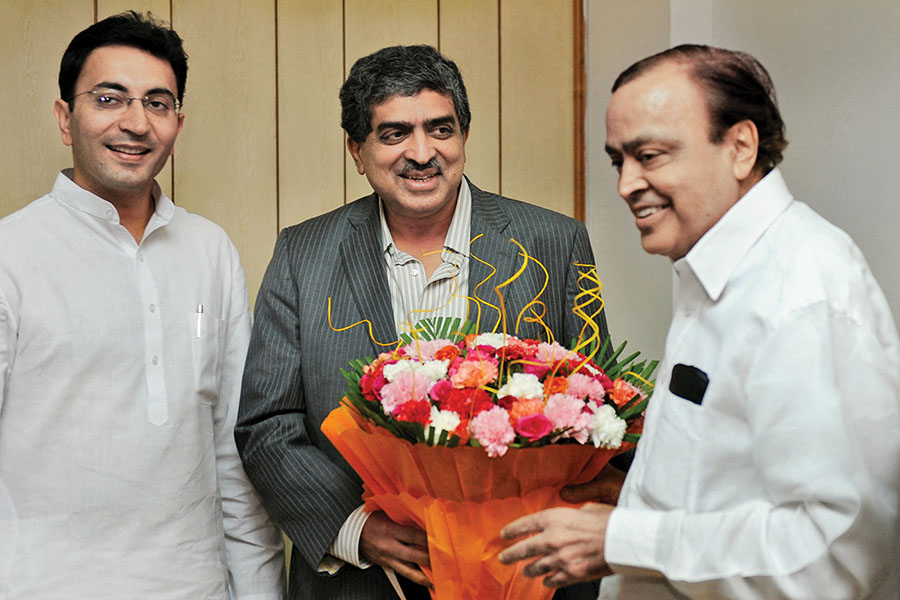 Nandan Nilekani (third from right), stands alongside other founding and board members of Infosys as the IT company commemorates its 25th year on July 31, 2006. Nilekani was then CEO, president and managing director of Infosys

For example, nobody believed that India could have a biometrically de-duplicated unique ID in 2009, Shah says. Or that real-time online authentication could be the basis of social security and subsidy payments, back then. Reliance Jio Infocomm’s 4G data revolution was still seven years away, and mobile phones were mostly used for voice at that point.

“Nandan boldly and accurately predicted where technology was going, and carried out the largest and most complex digital transformation in the world,” Shah says. “Anyone who has read our book will immediately know that Nandan is an optimist and technologist at heart. He is a strong believer in India’s demographic dividend, and India is only getting started, with Aadhaar, UPI and what’s been done so far.”

Aadhaar has its critics even today, but Shah says the unique ID experiment has made life easier literally at a billion-person scale. Nilekani’s thirst for knowledge, willingness to meet new entrepreneurs, ability to look at technology solutions and visualise how they can create impact at scale is a delight to watch, Swamy says.

Nandan Mohanrao Nilekani (67) was born in Bengaluru’s Vani Vilas hospital. His dad was a manager at a local textiles mill. By the time he was 12, the mills were in trouble and his father had a tough time going from job to job to fend for the family, Nilekani himself recalls in a video, from 2014. To ensure the stability of his education, as a teenager, he was sent by his father to go stay at his uncle’s, in the town of Dharwad. He borrowed textbooks from his cousins in Mumbai to prepare for the Indian Institutes of Technology’s entrance tests and made it to the prestigious engineering schools, opting to go to IIT Bombay. The rest is living history.

Infosys made him wealthy. Nilekani, with his personal wealth valued at $2.75 billion, is listed at rank 75 among India’s 100 top billionaires on Forbes’ list of the world’s richest people in 2022.

Possibly the only public setback—at that time—that can be attributed to Nilekani is his very brief stint as a wannabe politician, seeking to win a seat at the Lok Sabha, from the Bangalore South constituency, in 2014, as a member of the Congress party. Nilekani himself called the attempt “a big mistake” that he learnt from, in an interview with ET Now in 2019. On the other hand, politicians of all persuasions recognised Nilekani’s value. He started work on Aadhaar under a government led by the Indian National Congress—with a cabinet rank—and continued work on the multiple digital India projects under the Bharatiya Janata Party’s government, although he’d resigned from UIDAI in 2014 to contest the Lok Sabha elections.

Purohit believes that whether it is Aadhaar or other digital building blocks, or Fundamentum, they are all outward manifestations of Nilekani’s underlying deep contributions. “These are what people can see and use,” he says. However, “what he has changed is the role of technology in serving a billion underserved and unserved people, and the relationship between government, entrepreneurs and those focussed on addressing the [UN] Sustainable Development Goals,” he says.

“What he has actually changed, in an irreversible manner, is the way the world thinks about India.”

Tweets by @forbesindia
DoT tells telcos to keep 5G away from airports — report; DeHaat raises $60 mln from Temasek, others
Photo of the day: No respite