Why putting your phone away isn't the answer

Interaction on social media during an event increases our enjoyment in the moment and beyond. 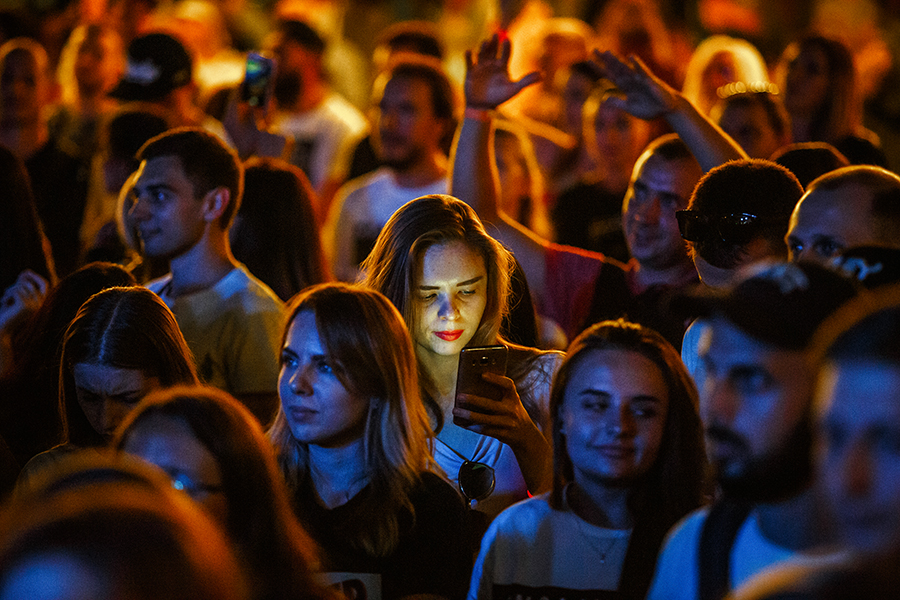 The admonition to “Put your phone away!” while attending an event is universal. We all have the sense that if someone is fiddling with their phone or texting during an experience, their attention isn’t where it should be. And indeed, previous research does show that using technology to multitask during experiences can reduce feelings of immersion and enjoyment.

Yet people persist in texting or posting on social media during experiences of every variety. For example, during the 2017 Super Bowl halftime show, over 5 million tweets were posted during the 30 minutes Lady Gaga was onstage. And Eurovision viewers in 2017 generated about 5 million social media interactions during the show. Are all these people really undermining their own enjoyment? And is it really the case that generating content during experiences is necessarily detrimental?

Our recent work indicates that these assumptions may not reflect how most consumers actually generate content during experiences. The concerns so regularly expressed by the popular media may be greatly overstated.

Time flies when you’re having fun
In our paper, “Generating Content Increases Enjoyment by Immersing Consumers and Accelerating Perceived Time”, published in the Journal of Marketing, Gabriela Tonietto (Rutgers Business School) and I found that those who generate relevant content during an experience enjoy it more than those who don’t.

We ran a series of nine studies to show that generating content during an experience increases feelings of immersion and makes us feel like time flies, which in turn enhances our enjoyment of the experience. That is, when we write a text or a social media post about an ongoing experience, we actually use our phones in a way that complements, rather than interferes with, what we are experiencing. And left to our own devices, that’s exactly what many of us do.

Our studies encompass a broad array of experiences, both inside and outside the lab, that vary in duration from a few minutes to several hours, including the Super Bowl halftime show, holiday celebrations, a dance performance, virtual safaris and bus tours, and a horror film. During all these experiences, we consistently found that generating content led people to feel more engaged in their experiences. This was true regardless of whether people tended to say positive or negative things about their experiences. In addition, when people created content in response to a positive experience, they enjoyed it even more. For negative experiences, though, this effect on enjoyment did not emerge. Because generating content draws people into an experience, doing so during a negative experience might ignite negative feelings.

Generating content as a participatory activity
In a representative study from our paper, 1,212 Amazon MTurk participants who planned to watch the Super Bowl halftime show were given instructions in advance. To examine the natural content creation of consumers, we randomly assigned them to different content creation conditions: One group was asked not to create content while watching the show, another group was asked to create content about the show itself, and an additional group was asked to use their phones in ways that were unrelated to the halftime show.

Strategies for creating an immersive experience
How can organisations promote these immersive feelings by encouraging consumer content creation? We wanted to understand if this behaviour must be organic to be beneficial, or if consumers can still gain the same rewards when marketers prompt them to generate content.

Several of our studies tested this possibility. We systematically tested two key strategies for encouraging content creation and examined whether they effectively increased this behaviour and whether those who created content in response to those strategies reaped the same experiential benefits.

The first strategy is incentivising content creation. In one study, participants were told that if they created content related to a particular experience, they would be entered in a raffle for a chance to win a small amount of money. We found that consumers who were incentivised to create content were about two to three times more likely to create content than those who were not. Perhaps even more importantly, those who created content because of an incentive also reported greater feelings of immersion and enjoyment than those who weren’t offered an incentive.

The second (even cheaper) strategy is using a norm nudge, or communicating that a key behaviour is extremely common. For example, in one study, participants were told that they were going on a bus tour with a company that provided an app enabling consumers to create content during the experience. One group was presented with a “high” social norm, indicating that 90 percent of their fellow customers downloaded and used the app, while the other group was presented with a “low” social norm, indicating that only 10 percent of customers used the app.

We found that consumers were approximately twice as likely to generate content when they were told that many of their fellow customers used the app. Moreover, those who chose to generate content again felt more engaged and enjoyed their experience more as the result of this norm nudge.

Overall, consumers who were encouraged to generate content from a marketing communication reaped the same benefits as those who created content organically. The implications for marketers are quite clear. Consumers who enjoy themselves are more likely to recommend an experience to friends and repeat it themselves. Thus, by encouraging content creation, marketers can not only help their consumers gain more from an experience, but also benefit downstream. Accordingly, content generation can be a win-win for marketers and consumers.

Beyond offering an incentive or communicating a social norm as described, marketers can also reap these benefits by using branded hashtags (#INSEADForGood) and ensuring that their brand is active on social media. Once in-store experiences are possible once again, other options might include pushing suggested posts to those who have signed up via email or text, providing an Instagram frame prop with information about an event, or running polls during an event.

The emergence of customisable sharing platforms that enable consumers to connect with each other during experiences, such as Whova for conferences and ShortStack for contests, provides more options still. Indeed, firms have a tremendous amount of tools at their disposal for helping consumers create content and helping themselves in the process.

Consumers can also take comfort in the knowledge that texting or posting during an experience need not come at the expense of their immediate enjoyment. So the next time someone asks you to put away your phone and “live in the moment”, remember that it’s not whether you use your phone, but how you use it that matters.

Tweets by @forbesindia
Dentsu World Services' leadership bags the Business Leader of The Year award
Photo of the Day: Leading by example