Players are the recipe for success; consumers our lifeline: Keith Pelley 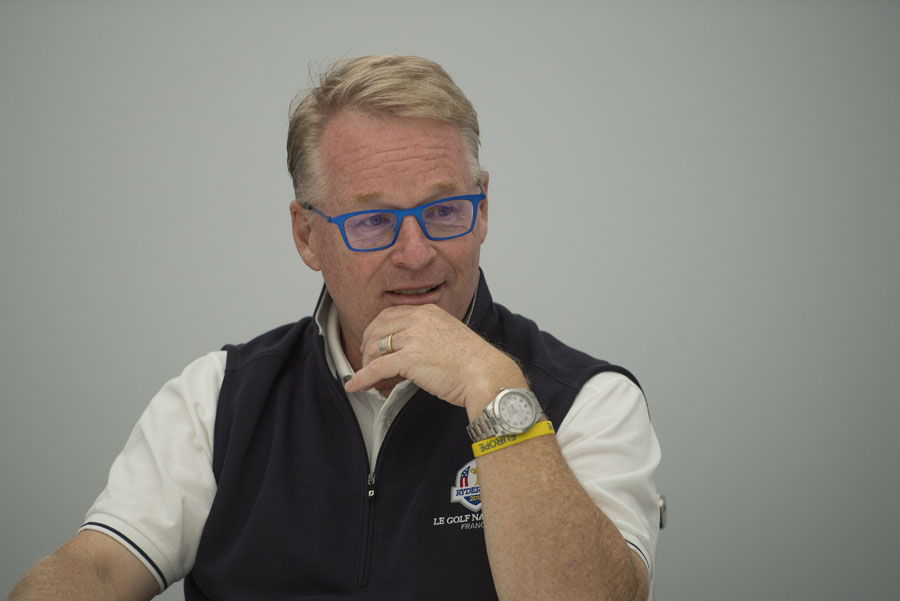 Image: Chris Turvey
Keith Pelley, 54, has been CEO of the European Tour since October 2015. On the sidelines of the recently concluded Ryder Cup – a biennial golf tournament between the European and American teams – held in Paris and sponsored by Rolex, he spoke to Forbes India about how the game has evolved and how it can be made more interesting in the future. Edited excerpts:

Q. How has the Ryder Cup evolved over the years?
I am a Canadian and I had never been to a Ryder Cup before 2016 [when it was held in Hazeltine in the US]. I was overwhelmed with the magnitude and the patriotic fervour then and I remember telling my wife: ‘This is a special event; we’ve got something that we can really build on and try to make it even bigger in Paris’.

Q. What are some of the things that you thought could be changed since you got associated with the Ryder Cup in 2016?
The first area that we looked at was the first tee [where the game begins]. There were 1,500 seats in Hazeltine [in the US in 2016] and there are 7,000 here [in Paris]… there was an incredible opportunity to enhance the consumer experience. We added the corporate hospitality box on the top, a VIP section in the middle… we spent a lot of time designing and determining how we were going to create those. The other areas that we focussed on were the video screens at the venue; we have 18 here which are more than double the size of the 12 in Hazeltine. There are two in the village [a massive viewing area for spectators with seating arrangements, food stalls, souvenir shops, etc]. The focus on consumer experience was what we wanted to concentrate on.

Q. What you are seeing in Paris now… is this the kind of consumer experience that you had envisioned?
Golf happens to be a platform that we are in to create an entertaining activity/event for a consumer. People are here because they love golf, but they love golf because it is entertaining. And a lot of people love this event [Ryder Cup] because it is entertainment. That’s the business that we are in; we are in the entertainment business. Our players are the recipe for success, but our consumers are our lifeline. The aspirations and goals of the European Tour, and those happen with the Ryder Cup, are to widen the engagement and reach of the sport. It will hopefully allow us to grow the sport.

Q. The Ryder Cup moves to Italy in 2022 [after it is played in the US in 2020]. How will you try to make it better?
We are always striving to do better and have a list of 40-50 things that we can improve on. What is nice is having the Ryder Cup in an iconic city like Paris and then moving to an iconic city like Rome. This is a major event that has attracted people and the media worldwide, so you have to work at improving it. It will be tough to beat what Paris has done, but we’ll take some of our learnings and make improvements that we can. We’ll start planning on how to ensure Italy is a level up [compared to Paris].

Q. Will technology change the game in the future?
You look at how technology has grown in the last 10 years. It will evolve further in the next decade. You will be able to see that every golf club will have a tiny chip that will not affect anything, but will show how far the shot was hit. All kinds of data that has never existed before will become commonplace.

Q. What can be done to make golf more appealing to people?
As much as you want to keep the heritage and the great tradition of the game, some of the potential rules and regulations designed towards the millennials are needed. Shorter public golf courses [like the ones in Paris] are the beginning of where most young kids start and fall in love with the game. We can have different tournaments that are six holes, nine holes, 12 holes [instead of the usual 18]… there are different ways in which you can make the game cool for the younger generation. One must keep the greatness of the game, but allow it to be more flexible. Everything is evolving. Nothing ever stays the same. If you don’t evolve, you don’t change.

Tweets by @forbes_india
The revival of L&T Finance Holdings
From festive shopping to home makeovers: India gears up for Diwali