Expensive Real Estate Markets are Due For A Correction 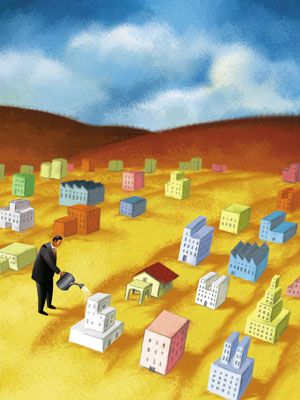 In late November, soon after environment minister Jairam Ramesh gave the green signal for Mumbai’s second airport, property prices around its location shot up by 20 percent. This was the same area that, even six months ago, real estate consultants and analysts were advising investors to stay away from. They reasoned that the prices had run up way too quickly. Today, the same professionals are recommending buying select properties in the same area at higher prices.

If these professionals had got it wrong once, what is the guarantee they will not get it wrong again? There are so many unanswered questions about the part of Navi Mumbai where the airport will come up. Where will the proposed Metro station be? Which areas will be most affected by aircraft noise? Where will commercial development happen?

The airport example is illustrative of the shape of things to come in 2011 for real estate buyers, both residential and commercial. As metros like Mumbai, Delhi and Chennai are retrofitting old buildings and seeing an infrastructure upgrade, a lot of real estate action is becoming visible.

While the investor can put money in stocks of real estate companies or invest in a private equity fund to play the property market, these still remain niche opportunities. For the vast majority, investment in land and concrete is the preferred option. So, what should be their strategy in 2011?

To begin with, initial signals are mixed. After a long while, Housing Development Finance Corp. (HDFC), the king of mortgages, is offering to pay a 9 percent annual interest to fixed deposit holders. This could mean that the company will eventually lend at 11 percent upwards. In short, borrowing to buy a property is going to become a costlier affair. This means only a two-digit percentage appreciation will yield a return rivaling fixed deposit rates for the investor. 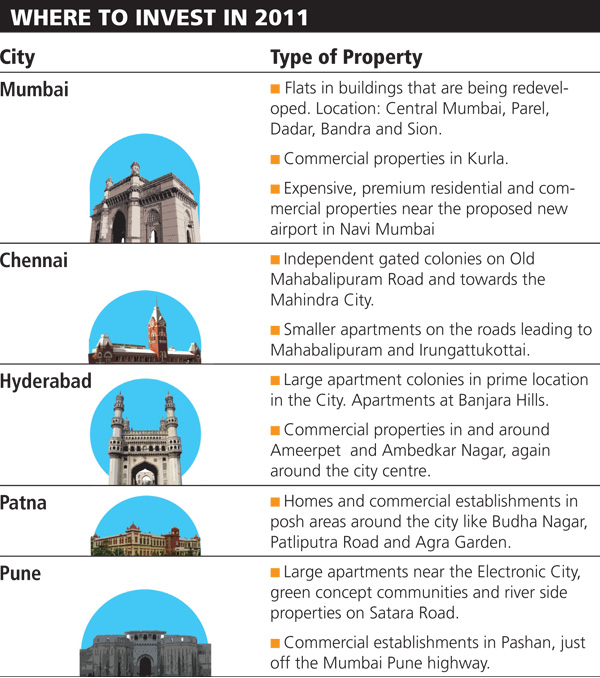 Added to this, the liquidity in the banking system is getting tighter. All this will result in a correction in expensive markets. Analysts predict residential property prices will correct between 10-25 percent in Mumbai, Delhi, Hyderabad and Chennai. An analysis by Liases Foras, a Mumbai-based real estate research firm, shows that each of these cities has over apartment inventory worth 22 months.

In Bangalore and Pune, the inventory is lower at 19 and 12 months respectively. Coupled with the fact that prices of real estate have increased quickly and are close to their peaks, the oversupply is expected to hasten a correction. “The imminent dip may well be a good entry point for home buyers in these cities,” says Pankaj Kapoor, CEO of Liases Foras.

The story, however, is quite different for commercial real estate. The effect of the sunset clause over the Software Technology Parks regulations announced in the last budget is now beginning to take effect. A joint report by property consultants James Lang LaSalle, business consulting firm KPMG and Confederation of Real Estate Developers’ Association of India (CREDAI), says that a healthy demand for IT/IT Special Economic Zone (SEZ) space is already visible from the second half of 2010.

The report says that the demand for IT SEZ space in cities such as Pune, Chennai, Hyderabad and Kolkata is likely to be robust in 2011, as the deadline for notifying an SEZ is March 2012. Top IT companies such as TCS, Infosys and Wipro have already announced that they will be hiring upwards of 100,000 people during the next year as per business growth projections. This trend will bring some cheer to India’s top real estate companies like Delhi-based Unitech, which has a lot of IT SEZ stock in Delhi.

For other commercial spaces, due to depressed demand, the capital values of properties fell much faster than the rental income across cities. In Mumbai, for example, Lower Parel property values fell by 30-40 percent as against rentals, which fell between 20-30 percent. Say Himadri Mayank and Abhishek Kiran Gupta, authors of the report: “The trend of outright purchases by occupiers and private equity players of commercial places is expected to continue in 2011.”

So where should the home buyers and investors put their money in? There are essentially two themes playing out in the Indian real estate sector. One is the re-fitment or re-development of old properties and the other being development of new infrastructure like Metro rail and airport across the country. “Marquee properties are the ones that set new record for prices. It will be a good idea to buy premium properties by reputed builders,” says Ramesh Jogani, managing director of Indiareit Fund Advisors, which manages over Rs. 1,900 crore.

Among his recommendations: Kurla, a rundown Mumbai suburb, for its proximity to Bandra Kurla Complex, the city’s financial district; premium apartments in Pune near the Mumbai-Pune Expressway and Hadapsar, where large colonies are located.

Investments apart, for buyers and investors, the single biggest change in the sector in 2011 is likely to be the establishment of a real estate regulator. A regulator will bring in standardisation of processes, improve transparency in deals and offer a dispute resolution forum. All this will cut the risk for investors. Thus the mature phase of Indian real estate may just be beginning.

Tweets by @forbes_india
Gems on Bargain: 10 Stocks We Recommend You Invest in 2011
Phone Review: Nokia N8