James Monsees and Adam Bowen have cornered the US e-cigarette market with Juul. Up next: The world 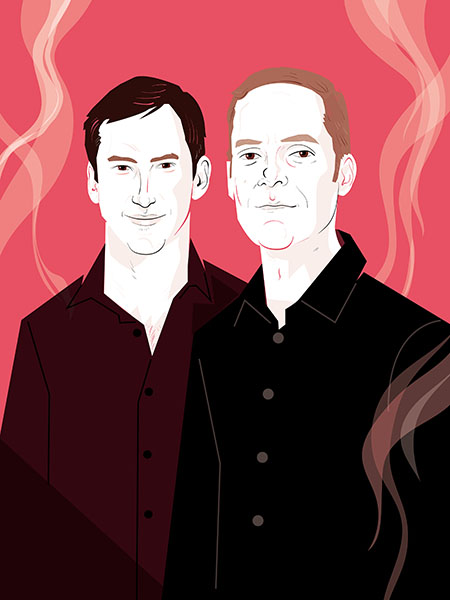 Image: Brian Taylor for Forbes
“Cigarettes are probably the most successful consumer product of all time, and they kill more than half of all people who use them long-term,” says James Monsees (left in the illustration), the 38-year-old co-founder of Juul Labs, maker of the world’s most popular e-cigarette. “That got us interested.”

Juul (pronounced jewel) introduced its flash-drive-shaped device in 2015 and has since taken over some 70 percent of the US market. A Juul, which transforms a pod of nicotine-laced liquid into inhalable vapour, sells for $34.99, while a four-pack of pods goes for $15.99 (some pods contain as much nicotine as a pack of cigarettes). Juul’s revenue should grow by more than 300 percent this year, to roughly $1 billion. The company, which is profitable, is valued by investors at nearly $16.3 billion; Forbes estimates that Monsees and his co-founder, Adam Bowen, 43, each own about 5 percent of Juul, stakes worth some $730 million each.

E-cigarettes are unquestionably safer than traditional smokes, containing fewer toxins than the mélange of 7,000 chemicals found in regular cigarettes. But e-cigarettes have drawn criticism for their popularity among teenagers and the lack of research into their long-term health effects.

Monsees is not concerned: “A fairly small percentage of underage consumers are creating a lot of noise and distracting us from what can otherwise be one of the greatest advances in public health in our lifetime.”

In April, however, the Food & Drug Administration requested documents from Juul about its advertising and the product’s health impact, to investigate whether the company has intentionally appealed to youth. Monsees says Juul never has and never will market to underage consumers.