Experts credit a growing economy along with greater awareness among people for the combined 2.7 crore additional readership for dailies and magazines 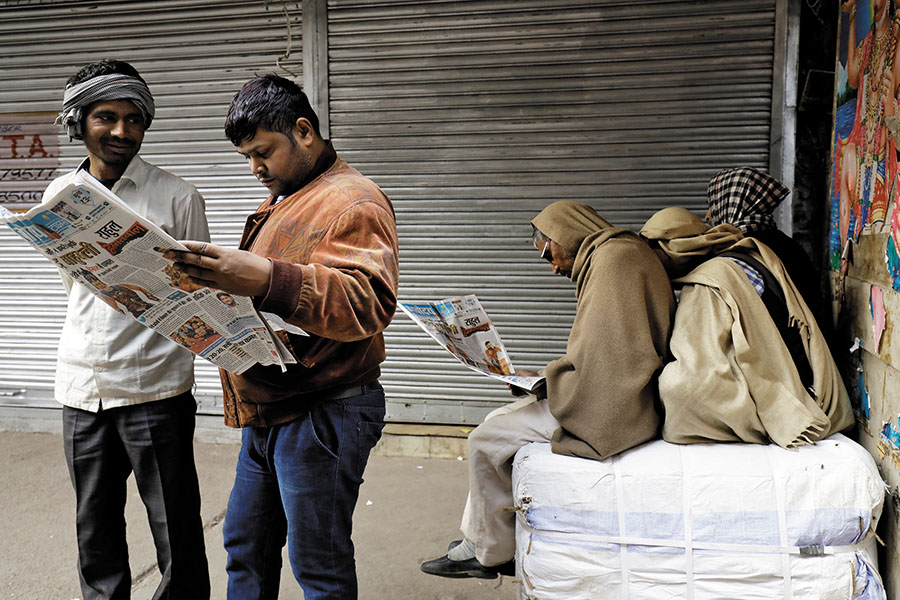 Absolute readership for print did not reduce over the years; it continues to keep growing
Image: Saumya Khandelwal/ Reuters

The Indian Readership Survey (IRS) for Q1 2019 shows that the print media in India is robust and likely to show consistent growth in the future. While dailies and magazines added 1.8 crore and 90 lakh readers respectively since IRS 2017, Hindi dailies seem to lead the print growth story with an additional 1 crore readers. English dailies, meanwhile, saw an additional 0.3 crore readers in the same time period. Experts believe this trend is peculiar to the developing Indian economy and say it is indicative of print and digital media consumption growing hand-in-hand in the foreseeable future. The findings of the pan-India survey, conducted by Nielsen for the Media Research Users Council (MRUC) and released on April 26, also indicate that online newspaper readership has grown by 5 percent on an all-India basis, while Indians active on the internet comprise 24 percent of worldwide users. Ashok Das, managing director of Hansa Research, says more people are coming into the fold of reading newspapers and magazines. “This is a sign of a growing economy with rising income, and improving education and literacy levels. All these factors help get more readers to print, even as absolute readership for print has never really reduced over the years,” he says. “This trend is unique to India to the extent that we are a growing economy. Other developing countries will possibly show similar trends. In developed markets of the world, media consumption shifts to audio-visual or internet-based mediums,” explains Das, who was involved with the IRS since its launch in 1995. Hansa Research conducted the IRS between 2003 and 2012. The IRS data also shows a strong growth of readers for regional media, led by Hindi. Regional dailies have registered 21.1 crore readers, up from 20.3 crore in IRS 2017. Meanwhile, readership for Hindi dailies has grown to 18.6 crore from 17.6 crore during the same period. Media analyst Anil Wanvari says this is a reflection of upward mobility in India’s hinterland due to increasing infrastructure, construction and development projects. “Growth of regional news channels is also explained by the increasing demand for local content from the smallest of localities,” he says. “The survey findings are incongruent with conventional beliefs that Twitter is the latest news destination, and that major developments are accessed mostly via WhatsApp and Facebook.” Wanvari, who is the founder of the indiantelevision.com group, says specialty or B2B magazines catering to specific segments of people will continue to do well as they provide analytical and in-depth stories not found in dailies. He also warns that this trend does not mean that the print media can rest easy, given that upward mobility among people, especially the younger generation, might eventually result in media consumption shifting to digital mediums.

Tweets by @forbesindia
Everything in Place
Shuchi Nijhawan: Banking on empathy