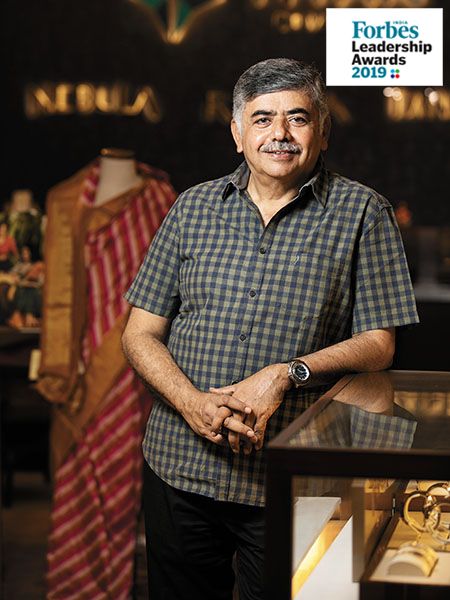 As a man dressed in a cotton shirt and trousers walks into Taj MG Road, Bengaluru, on a November evening, the hotel’s staff goes into a tizzy. The manager appears, checking if the unassuming gentleman wants anything in particular, as he makes his way to the Titan showroom in the hotel. The store’s manager too seems puzzled by his unannounced arrival. After all, Bhaskar Bhat—the man behind the phenomenal success of multiple Titan brands—has landed up at the Nebula and Taneira outlet after changing his mind at the last moment about where to have this meeting.

As he enters the store, he asks for the sales figures. The store manager gives the numbers. Bhat nods and smiles, knowing that sales have been low this season, and that the store has managed to meet expectations. You could make the mistake of assuming that Bhat is still at his job, but the fact is he retired as managing director (MD) in October.

“It is a different feeling to be freed from a nine-to-five job,” says Bhat, 65, as he settles into a chair in one corner of the store. But the free time, he says, “…is at a very, let’s say lowest common denominator.” Bhat, based in Bengaluru, continues to fly frequently to Mumbai to attend board meetings of 10 Tata Group companies, including Tata Sons, the group’s principal holding company; he is also the chairman of Rallis India, a subsidiary of Tata Chemicals. “Now, it is my cumulative experience that needs to be applied, and the contribution is different.”

Titan’s journey started 35 years ago, in 1984, as a joint venture between Tata Group and Tamil Nadu Industrial Development Corporation. Bhat joined the company in 1983 in the marketing department of the Tata Watch Project.

Since then the company has evolved into a retail giant, branching into jewellery, eyewear, accessories, perfumes, tech wearables, and sarees. “It was in 1994-95 that the idea of Tanishq was mooted. It took time to hammer it into a business model that generates revenues,” recalls Bhat. Today, Tanishq is Titan’s flagship jewellery brand, with the entire jewellery segment—which now comprises the Zoya, Mia and CaratLane brands—accounting for 84 percent (₹16,030 crore, as of March 2019) of the company’s total revenue.

“Bhat has been involved in Titan’s journey from the beginning and has helped it become a dominant player in the watch category, with 65 percent market share. More than 80 percent of the company’s revenue comes from the jewellery segment. From zero to 80 percent of revenues is a huge transformation,” says Abneesh Roy, senior vice president, institutional equities research, Edelweiss Securities.

But despite the success of Tanishq, Titan has continued to explore opportunities in other segments, such as watches. In this category, it has eight brands—from Fastrack, its most widely known, to Favre Leuba, the second-oldest brand of Swiss watches that it acquired in 2016. Recently, Titan also launched online sale of clocks.

“Now it's a natural extension of the watch business, but it happened just before I left. These are initiatives that are taken within the company by empowered teams, and there is a process of assessment and evaluation before they are implemented,” he says.

There are a few things that Bhat has done differently, thus adding value to Titan, says Avi Mehta, assistant vice president, IIFL Institutional Equities. “Since he took over as MD, he ensured that there is a cultural change within Titan in terms of creating strong leaderships, and building a culture of value that permeates through the entire ecosystem. They have been able to create brands in a largely unorganised sector in the country,” says Mehta.

While most Indian companies struggle to pass on the baton and look to hire an outsider to run the business, it was way back in 2002, just after Bhat took charge as MD of Titan, that the management realised that the founders’ entrepreneurial mentality has to continue in the company. “How could we keep that spirit alive in the company, when none of us individually had that capability?” says Bhat. Hence, instead of being driven by a single person, Titan became a company that aspired to become bigger through collective effort. “That’s how we transformed ourselves.”

As part of this evolution, independent teams for each vertical were created and given end-to-end support; each vertical had its own CEO, who had profit and loss responsibility for their businesses. In addition, eight years ago each geographical region was allotted similar heads. For instance, the northern region, which has a turnover of ₹5,000 crore, is run like a full-fledged company that the region’s head is responsible for.

“The next set of leaders who took over the watches and eyewear verticals has come from those fields, and been exposed to the company’s business in those verticals,” explains Bhat. “A high level of transparency and trust have led to a strong sense of ownership within the company. We have been able to do this without giving ESOPs,” says Bhat. After Bhat retired, CK Venkataraman, the CEO of the jewellery business who has been with the company for over 30 years, took over as MD of the company.

"Investors have liked Bhat’s transparent approach. He is always reachable and open about his success, risks and failures,” says Roy. With a market capitalisation of about ₹1.03 lakh crore, Titan is today the second-most valued company in the Tata Group, after TCS. 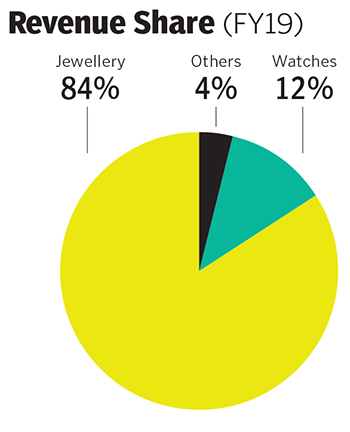 But its position has not stopped it from looking for newer opportunities. “It's a constant process of many ideas. That is the beauty of the organisation; ideas are always welcome and that is how Taneira happened,” says Bhat. Launched in February 2017, Taneira, a range of handmade sarees, is Titan’s youngest brand and is available in Bengaluru, Delhi, Hyderabad and Mumbai. In March 2019, it recorded revenues of ₹80.59 crore.

Apart from expecting Taneira to become bigger over the years, Bhat believes that Zoya, Titan’s luxury jewellery brand that was launched in 2007, is an opportunity the company could leverage. “We have been exploring opportunities, and yet conscious of the fact that the brand has to create value, not just valuation. It’s not like startups,” says Bhat.

“What they are doing is staying true to their core—where you have price points that are reasonable as well as competitive—while building a brand that customers can trust in an unorganised category. The company has been built with those ethics,” says Mehta.

But what are the things that he could have done differently? “We were at least two years behind in our smart watches and wearables categories... now we are catching up,” says Bhat. Even in the eyewear category, he believes they could have used a different scale-up model in the early days. It was retailed through multi-brand dealers for a long time, before getting its own stores. “Those are not business decisions but business tweaks that we could have done. The other thing is, we could have seeded the overseas jewellery market a little earlier; we have been very India-focussed, so it takes time to build overseas markets,” says Bhat, distracted by a customer who wants to know more about the sarees.

With one ear on what the sales person is telling the customer, Bhat takes the last question on how the current economic slowdown is affecting Titan. “We have been through these times before; it is the third time we are going through it. Recession and all will happen; for us targets are sacrosanct,” he says. The two earlier slowdowns he refers to are the 2008-09 global financial crisis, and the changes in the Companies (Acceptance of Deposits) Rules in 2014 that brought cash deposits from customers under the definition of public deposits; with this, Titan’s Golden Harvest and Swarna Nidhi schemes had to be shut down.

Although Bhat is not running the daily show anymore, he is well-placed to say: “There will be more things that will come out of Titan because that is part of Titan’s DNA.”

Tweets by @forbes_india
Men want paid leave but don't use all of it. What stops them?
Comic: When the Finance Minister says she doesn't eat onions