The maths teacher turned edtech entrepreneur has always known how to reach a wider base of students. As Byju Raveendran looks from scaling in India to global markets, his only competition is with himself 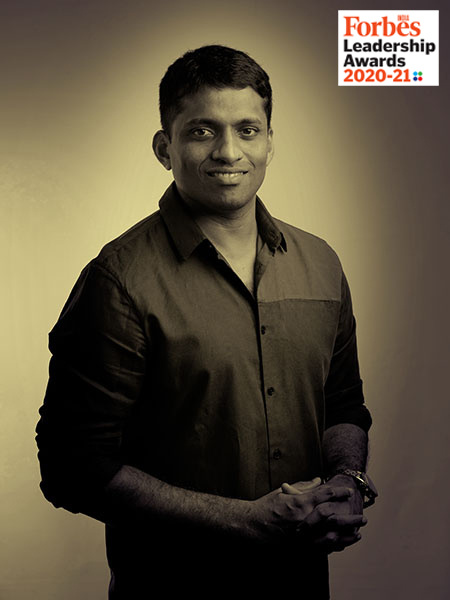 About three-and-a-half years ago, after a knee operation, Byju Raveendran dropped in to meet GV Ravishankar, managing director of Sequoia India, an early investor in Byju’s. Ravishankar recalls that Raveendran had told him about the fall he had had playing football and the subsequent surgery, “but the thing is for him everything is a challenge that needs to be surmounted. So he thought, ‘how do I get back into action as fast as I can?’.” Raveendran, it would seem, pushed himself to a faster recovery. A few weeks later, Ravishankar received a picture from Raveendran–of him running a 21-km half marathon with a message that said, ‘Everything is a challenge, I thought this was a challenge’. “That’s the nature of the person, you know, setting high bars and trying to achieve and overachieve and pushing himself to be the very best,” says Ravishankar.

One doesn’t need to guess how Raveendran has reacted to the challenges posed by the Covid-19 pandemic. While the world came to a standstill, the 39-year-old founder of Byju’s moved swiftly, making the most of the inflection point in the edtech sector, raising funds and making acquisitions in a strategic bid to cover all bases, from curricular to extra-curricular learning, from online to blended models, and asynchronous and synchronous learning.

In August 2020, the edtech major acquired online coding school WhiteHat Jr for $300 million. After six rounds of funding in 2020, securing $1.32 billion and a decacorn status, in January, the company reportedly signed a deal to acquire brick-and mortar test prep leader Aakash Educational Services for $1 billion, one of the biggest edtech acquisitions in the world.

In early February, Byju’s signed a ₹130 crore deal to become a global partner with International Cricket Council (ICC). And in mid-February, according to reports, it was set to acquire rival Toppr in a $150 million deal and Mumbai-based edtech firm Scholr for about ₹18 crore.

“Our biggest challenge was how do we create awareness for online learning,” says Raveendran, who set up Think & Learn in 2011 and launched Byju’s The Learning App in 2015. “For online learning to really work, you also need to create formats that are appealing to students to learn on their own. In a coun

try obsessed with spoon-feeding, that’s where we have put most of our effort, time, money in the last five years.”

The time and effort paid off. In the initial days of the lockdown, when schools were shut and students started looking for and trying out courses online, Byju’s took a call to make all its content free. “Just to call out the numbers, the first four-and-a-half years we got 45 million users on our free platforms. In the last 10 months, we added 35 million on top of that.” It was a challenging time, but “with every challenge you also get an opportunity”, he says.

Ahead of the Game
In the course of the 18 years that Raveendran has been in the teaching arena, he has constantly pivoted, catching trends, and quickly changing and adopting newer methods and business models to get to a bigger, wider user base. To accommodate teaching students preparing for CAT, he first took classes in auditoriums and then stadiums, scaling it further to beam the videos to various cities.

The offline to online pivot came with the launch of the app—to a large extent pioneering the use of technology in education—and while the principle of explaining concepts remained unchanged, it was also a pivot to creating content for K-12 students, changing the go-to market.

What counts is not just changing, but also scaling fast. “You make mistakes, then you learn from them and improve, and when you see that the next one is working, scale fast. You can’t take 12 months of ideation, you need to think of it in the shortest possible time and launch and figure out what is working, what the users want,” he says on a Zoom call.

The growth path has also expanded to different offerings and other markets. In early 2019, it acquired US-based educational games startup Osmo for $120 million and in August 2020, it acquired coding startup WhiteHat Jr. With Osmo, Byju’s not only got intellectual property in the form of its computer vision platform but also a starting point in the US. “We have been able to scale their business from $25 million at the time of acquisition to… we will close the year at $110 million this year, so in two years we have scaled that 4.5x,” says Raveendran. While WhiteHat Jr adds “a teacher layer” or live learning to their asynchronous product-based learning.

In the middle of the conversation on the Zoom call, Raveendran asks for a 10-second clip of him teaching in a stadium to be played. The Indira Gandhi Indoor stadium in Delhi, 25,000 students in the stands, Raveendran on a hexagonal stage with six screens below projecting his lecture. “If you don’t do it right even for five minutes there will be booing in the crowd. You need to make sure they are engaged and there is not even a 30-second lapse, so you have to literally elevate a maths session to a maths concert,” he says. For the post-pandemic world, the concert analogy fits in with the Aakash acquisition, a way to offer a blended model of offline and online teaching. “The reason when we moved from offline to online, we also moved from test prep to school learning, is that for test prep, these high-stake exams, people will still want to go to an offline location.”

In a blended approach, students will learn at home and need to come to a location perhaps once a week, so that they get the rigour of test prep in a group as well as access to Byju’s’ “rock star teachers” through online, which they might not get in a solely physical format.

Essentially, if it’s been a year of massive fundraising, it has also been a period of aggressive spending. Ravishankar seems unperturbed. “It may appear like Byju’s is acquiring many companies but we know these moves are important for the long term where you are trying to finally solve for the child. We think it should not be only one model, it should be a combination of many models,” says Ravishankar. 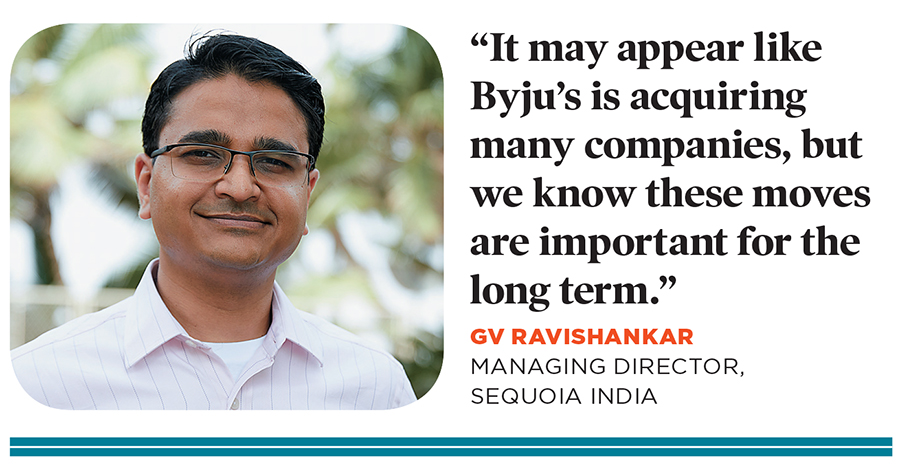 As also many markets. Take the ₹130-crore ICC deal. Cricket has been a favourite marketing tool (Byju’s had earlier clinched a jersey sponsorship deal for the Indian cricket team) and for Raveendran, the three-year agreement that will see Byju’s partner all ICC events over the period—including the forthcoming ICC Men’s T20 World Cup in India, and the ICC Women’s Cricket World Cup in New Zealand—falls in line with his scale-up plans. “We signed the deal because our scale-up plans are in English-speaking markets and English-speaking markets are all Commonwealth countries as well as cricket-playing nations. So it was an easy decision for us to create brand awareness in those new markets.” He maintains that their core model is profitable in India and “in one to two years we will turn profitable even in new markets”. And though they haven’t “thought about it seriously”, Byju’s is also looking at an IPO in the next 24 months.

Since they first invested in the company in 2016, Dev Khare, partner, Lightspeed India, has known Raveendran as someone into sports and very competitive. And he has stayed true to himself. What’s changed, he adds, is that his ambition has unfolded since then. “What we find really great about him and what we find in the best entrepreneurs out there in India, the US, China, wherever, is that they are always looking for the next big markets for their business, not just focusing on what they are doing right now.” 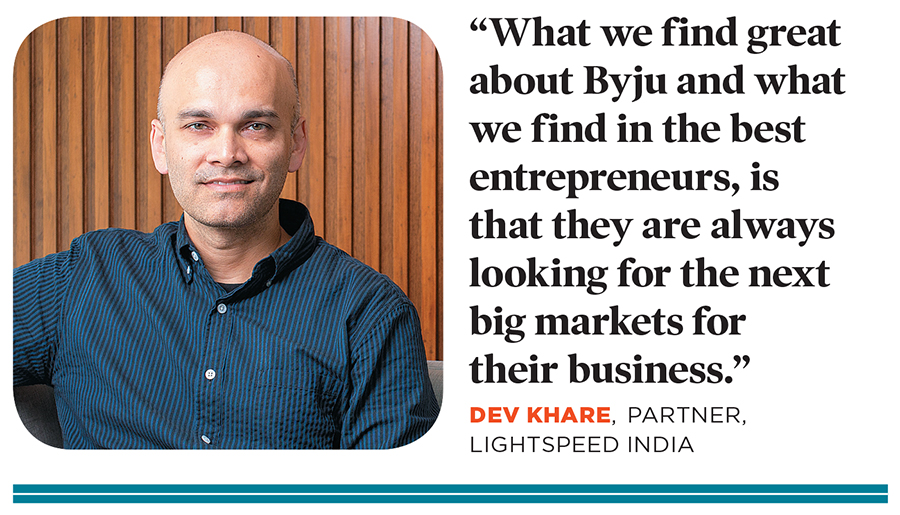 Game Set Match
Raveendran’s love of sports is well known and there are many analogies, lessons and inspirations for business and team management that he draws on—from looking at the football field to build and manage teams to learning controlled aggression from table tennis. “All football teams have their own playing style, especially the clubs with tradition. Now suddenly if you revamp the entire team, buy 11 players just because you have a lot of money, you lose the culture, you lose the playing style which defined it. Can you buy 11 players and create the best football team? The answer is no. For every team there is a playing style, so the first four-five players who define the company culture are very important, that’s why the people who get you from 0 to 1 are important.”

That said, he’s always looking to add more entrepreneurial spirit to the company. While there is integration, the companies Byju’s has acquired are run as separate units, with most of the founders staying on to help build and grow. It’s also why when asked about the WhiteHat Jr controversy last year, which was criticised for its advertisements, Byju’s uses the word ‘them’. “The fact is they made marketing mistakes during the early months, and even before the acquisition, before we came on board, they corrected them,” Raveendran says, adding, “I am using the word they because you would have already understood that even within Byju’s we have kept enough independence for all these companies. If you bring all these together you will actually slow them down, right? Because all of them are at different stages of the company’s growth.”

Slowing down is not an option. Being in for the long haul is. Most of his heroes are in sports, and expectedly, people who challenge themselves, like Roger Federer. “Like doubles you can still play well even in 30s and 40s, but [in singles] playing better than you were in your 20s is unheard of, even in [your] late 30s playing better and with the same passion is like you versus you. This is close to me, close to us,” he says.

It’s what defines his approach to business, to being an entrepreneur–continuously innovating and positively disrupting his own model. Because, “if you are willing to disrupt your own model [rather] than someone else, then you can stay in the game,” he says. “It’s not about winning the game, in business it’s all about staying in the game. If you can be in the game for decades, that’s what differentiates a great company from a good company.” However, he quickly smiles and adds, “I am not saying we are a great company, time will tell whether we are able to do something like that.”

Tweets by @forbesindia
Maker of Dove soap will drop the word 'Normal' from beauty products
Forbes India Leadership Awards 2021: From NR Narayana Murthy to Virat Kohli, what to expect