The Infosys CEO came on board at a time of internal conflict, but quickly stabilised the ship and led it to a path of growth 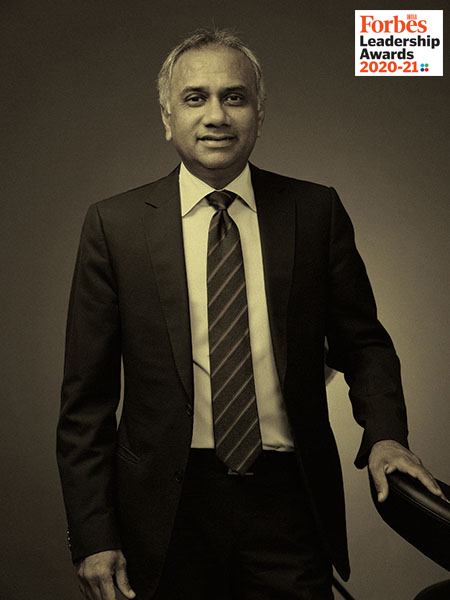 
Salil Parekh came to Infosys a little over three years ago as its CEO and MD. It was perhaps a more challenging time than when founder NR Narayana Murthy had come back in 2013 to take over from then CEO SD Shibulal. While Murthy had taken over from his co-founder largely to accelerate growth after the company had slowed down, Parekh came in at a time of a much-publicised internal conflict.

Murthy had accused a chief executive he had chosen himself of governance lapses, and the year-long fight that followed had precipitated the departure of the CEO, Vishal Sikka, and some of his board. A search team led by co-founder Nandan Nilekani, who came back as non-executive chairman, named Parekh, 56, a former Capgemini executive, as the new boss. He took over on January 2, 2018.

Three years on, Infosys seems to be humming flawlessly, all cylinders firing. The company was the only one among the top three Indian IT companies to show positive year-on-year growth as Covid hit home in the first quarter of fiscal 2021, and Parekh capped that achievement by announcing the largest contract won by the company in its history, in the following quarter.

Parekh seems to have brought an attitude and approach to the job that could almost make him look boring in comparison with his flamboyant predecessor who could wax eloquent on anything from murmurations to problem finders. Parekh’s public comments at Infosys have never deviated from emphasising the need to focus on its people, customers and execution.

“Salil has brought stability to Infosys and more disciplined approaches to selling. He’s also been able to tap into his extensive experience to create new types of innovative deals and models with clients,” Ray Wang, principal analyst and founder of Constellation Research in the US, told Forbes India in an email interview last year. “He’s been mostly understated in public, focussed on delivery and the execution of the team. There’s been good progress and a focus on the fundamentals.” 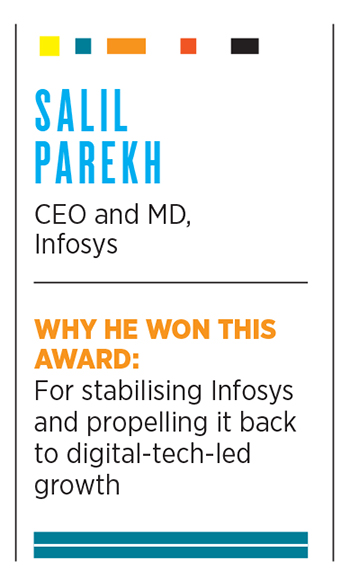 That approach also seems to have acknowledged Murthy’s unique role in building Infosys into the company that it is today, continuing to be a source of wealth creation for individuals and institutions alike, who own its shares, while the country’s so-called new-age unicorns are still burning cash and yet to enter the primary markets.

“Infosys is an organisation deeply rooted in values of learning and doing the best for our clients. Salil has intensified this culture of learning and innovation,” Nilekani had told Forbes India in an email interview in August 2020. “Since Salil took over, we’ve seen tremendous progress on several fronts.”

As a result of intense focus on client relevance, Infosys, under Parekh’s leadership, is leading industry growth and the company’s digital services are growing steadily, Nilekani said. Clients trust Infosys as their partner in large-scale digital transformations, and the partnerships Infosys has struck and the acquisitions it has made under Parekh reflect this trust, he said.

In July, Infosys announced it had won a large contract with Vanguard, a Pennsylvania-based financial services company. As part of the contract, some 1,300 Vanguard staff would be moving to Infosys in the US to become the Bengaluru-headquartered IT services company’s employees. A senior Vanguard executive would also move to head Infosys’s Mid-Atlantic Retirement Services Center of Excellence and serve as the company’s chief client officer.

While Infosys didn’t disclose financial details, the deal was reported by The Times of India to be worth as much as $1.5 billion, citing sources close to the development. “It’s the biggest contract in the history of Infosys,” COO Pravin Rao told Forbes India in an interview, while declining to comment on the value.

In December, it was reported that a contract won by Infosys from German auto company Daimler was worth as much as $3.2 billion over eight years. Infosys has not revealed any financial details, but Nilekani called it “a harbinger of the future in a multi-cloud enterprise world” and “an industry defining partnership”, posting on Twitter. 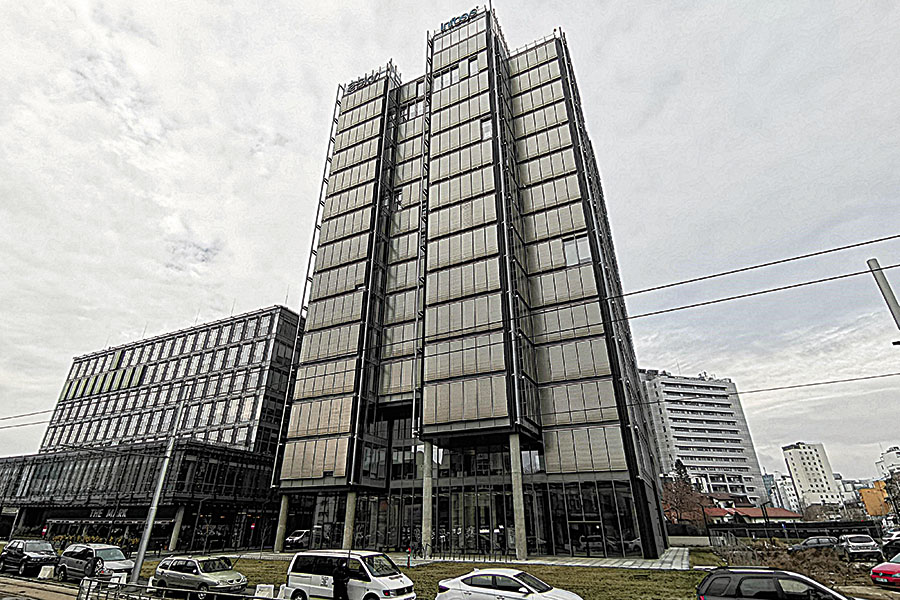 Infosys’s office building in Bucharest, Romania. The IT company is expanding its local presence in several global markets, including the US and Europe
Image: Courtesy Infosys

By building new capabilities in digital technologies, cloud computing, automation and artificial intelligence (AI), Infosys has sought to stay relevant as a technology provider to some of the world’s biggest companies in retail, pharma, manufacturing, telco, hi-tech, utilities, and, of course, financial services, its biggest vertical. Its efforts, on Parekh’s watch, seem to be paying off as it has won even larger contracts. And the share of revenues from digital technology services as a proportion of the total has doubled.

For the three months ended December 31, 2020, Infosys delivered its highest third-quarter sequential growth in eight years, at 5.3 percent in constant currency. On a year-on-year basis, revenues grew by 6.6 percent, and digital revenues grew by 31.3 percent. Overall digital revenue crossed more than half of total revenues. Large deal total contract value won during the quarter was at an all-time high of $7.13 billion, Infosys reported in January.

“I think, where we are today, the things that we have focussed most on, the first is client relevance, and that really is all about building out capabilities, focusing on where our clients are going,” Parekh told Forbes India in July. “And today, and over the last couple of years, it has been essentially digital capabilities, cloud capabilities, then focus on automation and AI. So that’s been really the primary driver for us—client relevance.”

“As an essential supplier to many of the world’s largest corporations, Infosys demonstrates its relevance on a daily basis,” Peter Bendor-Samuel, founder of Everest Group, which advises large corporations in the US on their business tech strategies, told Forbes India in an email last year. This could be clearly seen during the Covid-19 crisis, where despite having to move all its employees to work from home, Infosys kept its critical systems up and running while assisting in getting its customers’ works up and running at home. 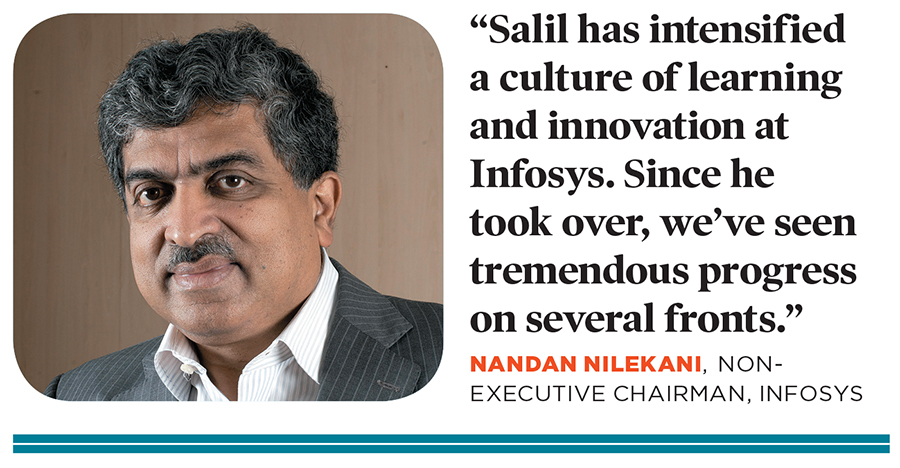 And those companies that have been early in embarking on their digitalisation journeys are coming out ahead of those who reacted late, but there is still time for everyone to go digital, Parekh says. Infosys’s own experience and achievement in getting 99 percent of its staff to work from home in a matter of weeks were a result of investments in the necessary technology infrastructure over the past years. That has made a difference in how its clients perceive the company.

“They’re starting to see us as someone who can work with them more closely in these different environments. And that’s definitely a benefit as we go ahead,” Parekh said. As clients witnessed how Infosys reacted to the pandemic, and got a sense of its experience, the IT company’s standing rose as a provider of consulting-led services coupled with deep tech and engineering execution capabilities.

Building on this over the next few years will require the unglamorous task of continuing to do more of the same—offering an ever wider portfolio of digital and design capabilities and an ever deeper capability of technology and engineering. And never losing focus on that.

In addition to the focus on digital technologies, Infosys has now launched its cloud computing initiative called Cobalt. That’s going to expand even faster, Parekh says. There will be more programmes which are centred around platforms. There will be more changes in technology and Infosys will start to look at how that is affecting its client discussions. The most critical element for the future is to continue to stay relevant to clients.

Some external factors may also help. The first is the accelerated spending on technology by companies the world over to digitalise their operations in the wake of Covid. The second is the return to a more benign approach towards foreign skilled tech workers by America, the world’s biggest tech market. US President Biden has already either reversed or put on hold, for review, some of the measures taken by his predecessor Donald Trump to restrict access to foreign workers in the US.

A potential minefield is Infosys’s own policies aimed at building transparency and model corporate governance. The whistleblower policy, in particular, has been used to bring accusations of wrongdoing at the very top. It even cost the company its first professional CEO, Vishal Sikka, over accusations from founder Murthy that Sikka and his board swept under the rug allegations brought by an anonymous whistleblower over payments to the then CFO.

Sikka’s departure brought back Nilekani as non-executive chairman, who eventually named Parekh as the new CEO. Parekh wasn’t spared either. A so-called whistleblower group, this time, alleged in October 2019 that he had fudged numbers related to large contracts. An internal audit committee investigation found no wrongdoing, Infosys said in a statement in January 2020. “Infosys’s biggest weakness is its internal conflicts which blow up and distract it from its clients,” Bendor-Samuel says. “For it to prosper it must stay focussed on its customers and avoid the internal warfare which seems to be simmering. To Parekh’s credit, he has kept these to a minimum but they still persist.”

In the meantime, Parekh’s focus is clearly on winning more Vanguard-style contracts, and to ensure that Infosys’s employees have the skills and the tools they need to deliver on those contracts. “Now the challenge in my mind is to make sure that we keep our attention on the execution, focussed on our clients, focussed on our people that are making sure all of this is possible,” he says. He recognises the company has to give “complete attention and intensity” to its clients’ needs, which are continually changing. Then, in parallel, making sure the company is working with its employees to make them fully re-skilled and ready for the future that awaits.

Five years out, it will be about making sure that Infosys shines through its execution of a clear strategy to remain at the forefront of where the technology changes are for its clients. That’s the real value that Infosys can add at any given time to what its clients are doing, he said. “What is changing in a big way is the type of complexity that our clients are looking at. And we need to be much more positioned in the years to come, to be ever more joined up in this complex digital journeys that our clients are embarking on.”

Tweets by @forbesindia
Photo of the Day: The joy of up'Root'ing
Shiv Shivakumar: How to deal with the ten most important career dilemmas