In Cadila Healthcare, Sharvil Patel has an efficient legacy business with the possibility of new drug discovery becoming a significant growth lever 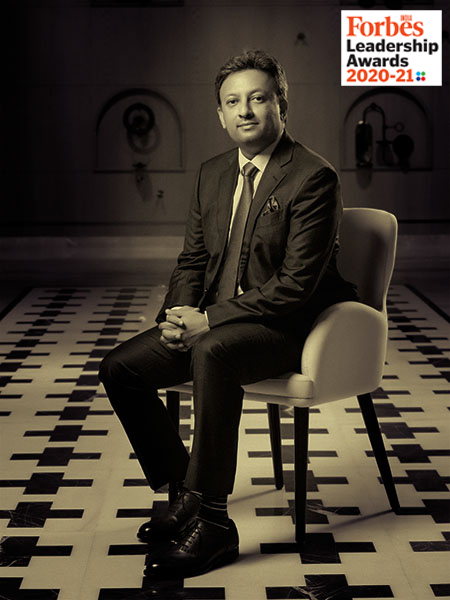 An hour-long conversation with Sharvil Patel gives one the impression that Cadila is a work in progress. The 42-year-old managing director of Cadila Healthcare speaks with the emphasis of a leader on a mission. His sentences rapid and thoughts cogent, he regularly comes back to his pet themes over the course of the conversation. These are well-worn lines he’s no doubt delivered on television and to analysts earlier.

Peel back the layers and it’s clear that the third generation entrepreneur who joined the business in 2007 and took over from his father Pankaj Patel in 2017 has made a mark on the business. Among his first tasks was to champion the Healthy Billion initiative that took the company past a billion dollars in sales in 2011. But it was not just achieving the number that was important. Equally significant was the growth path it laid out for the company over the next decade. One of his key aims is to get people to think not just for the next quarter but for a “few years down the line”.

Over the last decade, Cadila has delivered a topline growth of 15 percent a year, taking the business from ₹3,574 crore to ₹14,253 crore. At the same time, profits rose by 10 percent from ₹505 crore to ₹1,177 crore (FY20 was an exception as the Covid-19 pandemic resulted in lower profit growth.) At 20 percent, its operating margins are in line with those of the industry.

Cadila today is a well-oiled engine with its growth levers in biosimilars, vaccines and branded generics firing—an annuity business that brings in almost ₹2,000 crore in profit every year and priced at upwards of 20 times earnings by the market. At this valuation, the market not only believes that growth would continue but also that there would be additional triggers for a faster growth trajectory. Patel, keenly aware of this, points out that while “Indian pharma has done well on access and affordability”, it needs to take bolder bets. He’s allocated seven to eight percent of topline for research.

Those bold bets could come about in the form of new drug discovery which, if it works, should deliver results in the next three years. That has the potential to catapult the 69-year-old Cadila into a different league compared to its peers.

Initial signs are promising, but there is still a long way to go on that front. “If the company can successfully demonstrate its prowess in drug discovery, it would help cement Sharvil’s legacy,” says an investor in the business over the last decade. He’s also been impressed with the aggression that was on display when Zydus Wellness, a subsidiary, acquired Heinz India’s portfolio of brands, Nycil, Complan and Glucon D.

As a manager, Patel believes that one must focus on both leading and lag indicators. Outcomes are often a product of keeping a close eye on both and in a pharma business, it is crucial to plan for the next three to four years. This was a key lesson he learnt while working on the Healthy Billion initiative in the early part of the decade. Cadila has a large US business and the key to maintain growth is to file new product applications. Known as ANDAs (abbreviated new drug applications), they provide a peek into a company’s product pipeline.

In the early part of the decade, Cadila was filing eight to 11 ANDAs a year and Patel knew they needed to up this to maintain growth numbers. Over the years, he’s set in place systems and processes to take that number up to 35 ANDAs a year. The company gets 44 percent of its revenues from the US business and has a pipeline of 110 ANDAs.

Patel’s metrics in evaluating the two markets differ slightly. For a US launch, there is a cold hard calculation on the payback time. “If it doesn’t make us money in a year, we don’t approve (the project),” he says. In India, it looks at the ‘brand size’ it can achieve in three to five years. For any new investment, he pencils in a 13 to 14 percent return on investment and monitors costs per thousand for medicine production.

While the generics, biosimilars, vaccine and animal health business provide a strong base for the business, Patel’s key aim is to make Cadila a research-based pharma company. It has 1,400 researchers working across 19 sites and has five ‘new chemical entities’ in the pipeline. Having an in-house research team gives it the flexibility to move rapidly to promising projects and has allowed it to maintain a robust ANDA filing schedule.

The most promising of the new chemical entities is Saroglitazar that can be used to treat primary biliary cholangitis (PBC), which is a rare liver condition caused by an auto-immune reaction resulting from progressive destruction of bile ducts in the liver. For PBC, Saroglitazar has received a fast track and orphan drug designation whereby the US FDA will accelerate approval for drugs that fill an unmet medical need. Orphan drugs get a seven-year marketing exclusivity upon FDA approval. The market is expected to reach $10.8 billion, according to Coherent Market Insights, a consulting firm.

It is non-alcoholic steatohepatitis (NASH) where Cadila has pinned higher hopes for Saroglitazar. This is a chronic progressive liver disease that occurs when excessive amounts of fat build up in the liver which can lead to fibrosis. In India, 25 to 30 percent of the population is estimated to suffer from fatty liver which can progress to NASH, if left untreated. In the US, 6.5 million adults suffer from NASH.

“For PBC, there is some clarity, but for NASH, there is hardly any clarity and there have been many failures in the past. Both are large opportunities, but it will take a couple of years before we have clarity,” says Saion Mukherjee, head of India equity research at Nomura Securities. 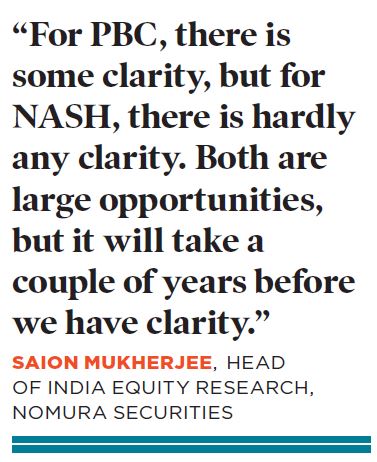 In March 2020, the Drug Controller of India approved Saroglitazar in the country for the treatment of NASH, making it the first drug to be approved anywhere in the world for its treatment. Patel expects US approvals to come in by 2023 for PBC and 2024-25 for NASH, making them among the first wave of launches for the treatment of these two illnesses in what is a $25 billion market. In addition, Desidustat is another molecule that has been approved by the FDA for clinical trials in cancer patients receiving chemotherapy-induced anaemia.

In valuing the company, analysts at Emkay are ascribing a net present value of ₹90 per share on account of Saraglitazar, none of which has been priced into the current valuation of ₹460 a share or ₹47,000 market cap. An additional ₹40 per share trigger could come from ZyCov-D, the vaccine for the SARS- CoV-2 virus that the company is developing.

Patel says the vaccine is in Phase 3 clinical trials in India and is on track to get regulatory clearance in March. He expects manufacturing to start in the first quarter of financial year 2022 and says even then, there should be a large market for them. The DNA-based Covid-19 vaccine has been developed entirely by Cadila’s in-house R&D team.

Cadila has a vaccine manufacturing capacity of 100 million doses a year and if the vaccination becomes an annual exercise, it could add ₹3,200 crore to revenue every year, according to Emkay. In effect, the company is well-positioned to gain from an upside in either the new chemical entity or the vaccine business.

For now, Patel, who plays tennis in his free time, spends most of his time managing the R&D pipeline (he kills projects early if they don’t show promise), managing capital allocation and directing the right talent to the company’s various business units. Digitisation was another key initiative that he championed—a large part of their processes are paperless.

Living in the same house would make discussing business inevitable, but there is an unsaid rule between father Pankaj Patel and son to leave work in office. Sharvil also makes it a point to take a vacation every year with no contact with his office.

(This story appears in the 12 March, 2021 issue of Forbes India. You can buy our tablet version from Magzter.com. To visit our Archives, click here.)