Binishells: The concrete bubble houses that are Hollywood's latest must-have 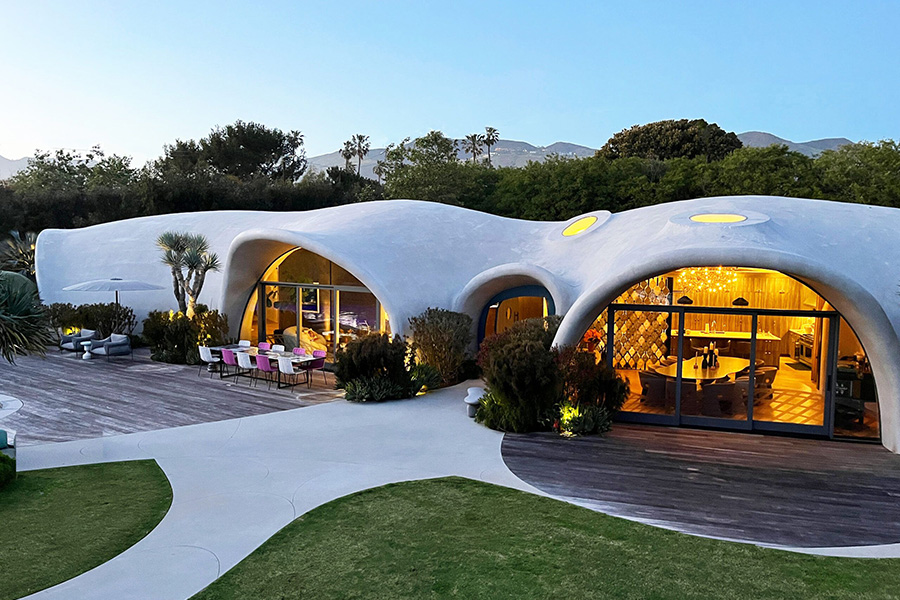 Binishells are gigantic inflatable concrete domes that rise from the ground thanks to propelled air. Image: Courtesy of Binishells

Hollywood stars have a taste for homes with a particular aesthetic. And Robert Downey Jr. is one such star. The American actor has built a Binishell on his property in Malibu, Los Angeles County. But this house, made of concrete shell, is more than just an architectural oddity, since it could provide an alternative to today's energy-intensive buildings.

Robert Downey Jr. and his wife's Binishell takes the form of a 604 m2 domed structure made entirely of concrete, reports The New York Times. Cartoon fans might describe it as being halfway between the Flintstones' cave house and the more futuristic home of the Jetsons. And that's what makes Binishells so distinctive. They look like they could have come straight out of prehistoric times, like troglodyte houses, or from the distant future.

Their atypical appearance is linked to the way they are built. Binishells are, in fact, gigantic inflatable concrete domes that rise from the ground using propelled air. Their inventor, the Italian architect Dante Bini, discovered in the 1960s that he could build a domed bungalow in about an hour. All you have to do is fill a nylon-covered neoprene air bladder with wet reinforced concrete and then slowly inflate it. Once the concrete has hardened, the bladder is deflated for further use and the Binishell is ready to be fitted out.

Nearly 1,600 Binishells have been built in 23 countries around the world since the 1960s. But the production of these inhabitable domes has been interrupted over time due to potential structural problems. However, Dante Bini's son, Nicolò, has been working hard to relaunch the concept since 2009. He's counting on Hollywood stars to help, and is currently working on building a new Binishell in Malibu for Darin Olien, the nutrition guru and successful podcast host. This one will go even further than that of Robert Downey Jr. and his wife, however, by being energy self-sufficient, according to Artnet News.

For Nicolò Bini, this is one of the advantages of Binishells. This type of housing is much less energy intensive than most traditional houses, thanks to the two-fold benefits of the concrete shell and the oval shape. It is also better adapted to the land on which it is built, and is more resistant to extreme weather conditions. "Instead of forcing the ground to accommodate the house, the house accommodates the landscape," the architect told the specialist publication.

That's why he's envisaging other uses for Binishells in the near future. They could find use as schools, military bases, sports centers or even as housing for thousands, even millions, of refugees. Indeed, Nicolò Bini is thinking big with a concept that's as relevant as ever. "Whether it’s Newton or Einstein or Plato," he told Artnet News, "in history when we come across these incredible challenges, we always look back to nature for answers." With their domed shape and low environmental impact, Binishells seem to have found their following. In Hollywood, at least.

Tweets by @forbesindia
Tether pledges to stop lending out secured loans in 2023
Gin's out of the bottle: Why alcobev company Nao is in high spirits