Gin's out of the bottle: Why alcobev company Nao is in high spirits

Diageo-backed Goan company Nao Spirits is brewing a craft-gin revolution in India. Can it shake and stir up the alco-beverage market? 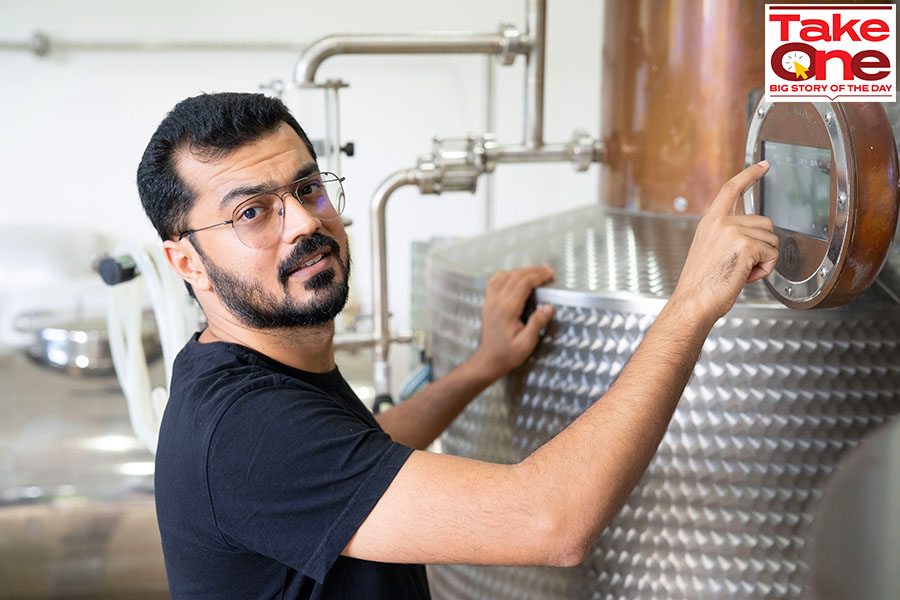 Punjab, 2016. The owner of a local distillery in Punjab sniffed moolah. It was sometime towards the latter half of 2015. Purwez Patel, former head of manufacturing at Pernod Ricard, was accorded a royal welcome given his pedigree and clout. “So how many cases are you looking at from us,” the owner inquired after throwing a lavish lunch for Patel and his friend Anand Virmani. The hospitality was followed by a whirlwind tour of the sprawling production facility. “I think 7,000 cases should be sufficient to begin with,” replied Virmani, who had sought Patel’s help in spotting distillery and production units for launching his yet-to-be announced alcobev brand. “7,000 per week is a great number,” exclaimed the owner. His eyes lit up. Patel, who has had a stint with the world’s second-largest wine and spirits seller, was expected to order big. “He would never go for a pint. It has to be large,” the owner said to himself.

There was an expectation mismatch, though. “No, we're looking at 7,000 cases a year,” clarified Virmani, who was then employed as a wine and marketing consultant with Perch Wine & Coffee Bar in Delhi. The former Deloitte consultant had worked for over three years at William Grant & Sons, the makers of Glenfiddich, one of the most famous single-malt Scotch whiskies. After his stunted stint as marketing manager of Remy Cointreau, a French alcoholic drinks company that produces Cognac, liqueurs and spirits, Virmani joined Perch. Now, he was preparing to roll out his craft gin brand.

Back in Punjab, the meeting ended abruptly. “Mr Patel,” the miffed owner underlined, “such a tiny quantity doesn’t make sense for us at all.” He also offered an unsolicited advice. “Craft gin has no place in the Indian universe,” he said, glancing at Virmani. The would-be first-generation entrepreneur was by now used to such uncharitable comments. He had met many naysayers who scoffed at the idea of craft gin. “Only Aladdin had a genie. But that was fiction and magic,” taunted one of the funders who shied away from investing in the ‘preposterous’ project. “It’s a ladies’ drink,” another one took a jibe. “Only old people drink gin,” came another barb.

Virmani’s confidence was stirred and shaken a bit. “Are we missing something,” he asked his wife Aparajita Ninan who was a graphic designer at Sesame Street India. “Are you sure we're doing the right thing,” he again asked Ninan, who would later be the co-founder of the company. Is there a larger message of ‘stay away from craft gin’ that the stream of steady rejections are trying to underline, he wondered.

Ninan, though, knew both of them were on the right track. She outlined the silver lining. First, global exposure of young Indian population meant retuning and refining of their alcobev buds. Globally, especially in the UK, craft gin was in the midst of a heady revolution. Gin and tonic was becoming a way of life, and a host of regional brands were drawing strength from their close link with the territory and local craftsmanship. Experimentation with flavours was already pulling consumers from other spirits, which were either jaded or were not exciting enough for youth. India, she underlined, was at the cusp of wide adoption.

Secondly, gin was not seen as intimidating. Ninan explains. Wine drinkers, for instance, are bombarded with lot of information about the product. Craft gin, she reckons, has a host of fresh botanicals in it. “And we have the ingredients in our kitchen,” she smiles. There was another reason to take the plunge. Virmani was already having a first-hand experience of a steadily growing stream of consumers looking for gin at wine bar Perch. One of the owners of the café, Kulpreet Sahni, an entrepreneur and investor from the shipping and hospitality world and also the majority investor behind Perch, encouraged Virmani to explore and funded the concept of Nao Spirits initially. “Take Rs 20 lakh from me and find out if the trend as per your data is for real,” he said when they first discussed this idea in early 2015.

Virmani and Ninan took a leap of faith, and launched Nao Spirits and Beverages in 2016. In September 2017, the duo rolled out Greater Than, India’s first craft gin. A year later, in July 2018, Nao introduced Hapusa, a super-premium gin. The next year, co-founders roped in Abhinav Rajput as chief operating officer and elevated him as co-founder in August 2021.

Fast forward to December 2022. The trend does not only seem to be real, but has gathered enough momentum. From Rs14.5 crore in FY21, Nao’s net revenue in FY22 grew to Rs22 crore. The Goa-based brand is now clocking a run rate of Rs45 crore for FY23. Rising numbers match the excitement of marquee buyers. In March, Diageo bought a 22.5 per cent stake in Nao Spirits. Though its first bet in India, the maker of Johnnie Walker whiskey and Smirnoff vodka started beefing up its portfolio when it bought Aviation American Gin, a gin brad co-owned by Hollywood actor Ryan Reynolds, reportedly for $610 million.

Back in India early this year, Diageo sounded bullish. Over the last three years, the Indian market witnessed the emergence of multiple craft gin players, said Hina Nagarajan, managing director and CEO of Diageo India in a media release. “Nao Spirits has been a game changer in the category,” she underlined. Diageo, she added, is deeply committed to support Anand, Aparajita and Abhinav to deliver Nao’s vision of placing Indian craft gin amongst the world’s most coveted craft spirits.
Globally as well, craft gin has been brewing heady story.

As the gin boom cools in established markets such as the UK and Spain, opportunities are set to emerge in a clutch of non-traditional markets, reckons IWSR, a global provider of data and market intelligence for alcoholic beverage market. Though both the markets are set to remain important sources of innovation and value for the category in the future, a new wave of locally-produced premium gins is exploiting growth opportunities in markets such as India and Brazil, industry body IWSR pointed out in a recent report.

The volume play is set to amplify. Global volumes of standard-and-above priced gins is poised for a compound annual growth rate (CAGR) of over 5 percent between 2021 and 2026, according to IWSR. While growth in the three largest gin markets of the world—the US, UK and Spain—will be subdued, strong gains are expected in other top 20 markets. In markets including Canada, Japan, South Africa and India, double-digit CAGR volume is expected from 2021 to 2026.

Back in India, a burgeoning craft scene is dominating the alcobev landscape. While Indian-made foreign liquor (IMFL) gins have dominated the market for many years, emergence of a local craft scene has transformed the category. Volumes for the standard-and-above price bands have more than doubled since 2019, and are expected to almost treble by 2026. 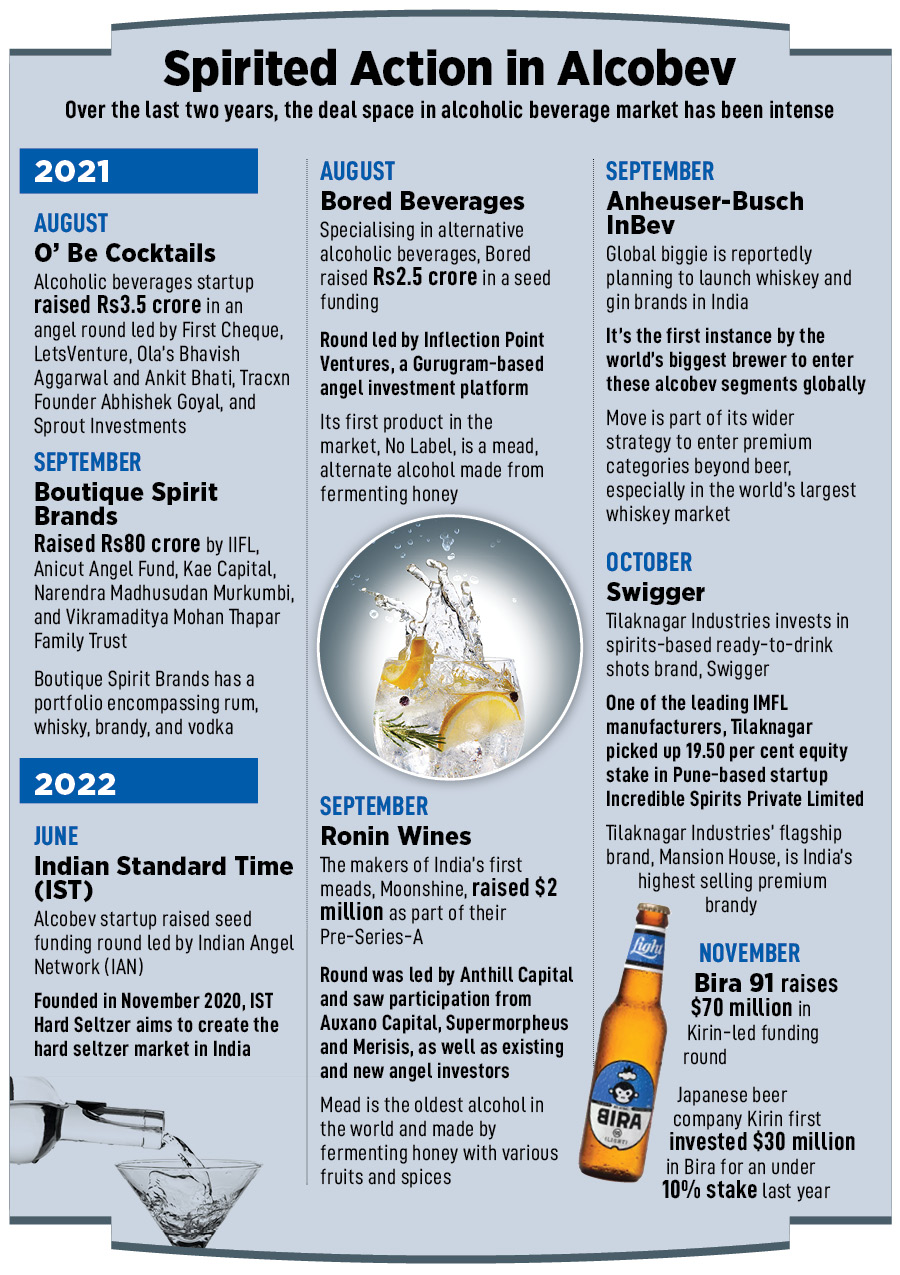 “The Indian craft category is expected to go from strength to strength, with the strong likelihood of more brands and more investment from large and small players alike,” Jason Holway, market analyst at IWSR, mentioned in a recent note. Leading international players are also able to offer a well-regarded gin brand, which should help to maintain momentum at the premium-plus end of the category, moving the centre of gravity gradually upwards, Holway noted.

Over the last two years, the deal space in alcoholic beverage market in India has been brewing with excitement, as a bunch of founders are experimenting with gin, beer and other spirits (see box). As far as gin is concerned, experts reckon that the high-spirited performance and resurgence of the alcoholic drink will only gather steam. “This is one spirit which is here to stay,” says Sonali Mullick, mixologist and head of operations at Mirah Hospitality, the company behind Bayroute and Hitchki chain of restaurants. Nao Spirits, she underlines, started the craft gin revolution. Hapusa, the world’s first dry gin, is made by using Himalayan juniper and also has hints of turmeric, mango, coriander seeds and Almonds. Greater Than, she says, is India’s first craft gin and is made using juniper and citrus, sourced from Spain and Macedonia. “The gin market will only grow from here,” she adds.

In fact, global liquor biggies have been scouting for interesting opportunities in India. Last year, French company Pernod Ricard, the maker of Absolut vodka and Chivas Regal scotch, reportedly was mulling to launch a venture fund in India to invest and mentor smaller companies. Mullick is not surprised to see MNCs queuing up to expand their play in India. Reasons are not hard to find. First is a young booming population. “They are bold and open to experimenting with spirits,” she says. Second, the stigma attached to consumption of alcohol has got diluted. And finally, the per capita consumption of alcohol is still miniscule as compared to global counterparts. “The country is thirsty and global biggies know that they can quench the thirst,” she says.

Notwithstanding the smooth forecast, there are likely hiccups as well.

Manish Kheterpal, managing partner at WaterBridge Ventures, points out twin challenges. Making of gin, he reckons, is like a gaming or a movie company. “You can’t just have one blockbuster. You have to come up with multiple hits,” says Kheterpal, who invested in Nao Spirits in his personal capacity in 2015. One of the early believers in the potential of craft gin and the capabilities of Virmani and his team, the angel investor reckons that Nao has to keep the creative juice flowing and focus sharply on new product innovation. Second challenge is navigating a web of excise and liquor regulations. “Scale would be a challenge and one has to figure out a low-cost distribution model,” he says.

For Virmani and his gang, though, gin is permanently out of the bottle. “The magic has just begun,” he signs off.

Tweets by @forbesindia
Binishells: The concrete bubble houses that are Hollywood's latest must-have
'Your passion should be your business': Aryan Khan