Nour al-Janabi has been making furniture for several years, and launched her business, Nour Carpentry, a few months ago 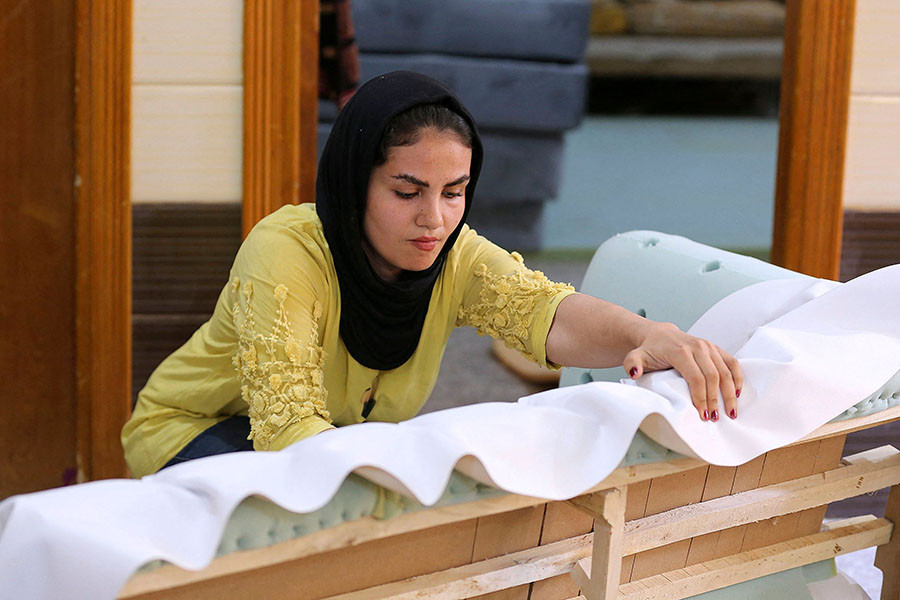 With hammer and saw, Nour al-Janabi is building her latest creation, a candy-pink sofa, in the carpentry workshop she runs in male-dominated and conservative Iraq.

"At the start, relatives criticised me," said the 29-year-old carpenter and furniture-maker, who is also a mother of four.

Covered in velvet or imitation leather, the sofas and armchairs that she designs, makes and mends in her south Baghdad workshop go from rustic style to Louis XV.

Janabi has been making furniture for several years, and launched her business, Nour Carpentry, a few months ago. She recently moved operations from her home to a house turned workshop, where she has four employees—one of them her retired husband.

"But it's not right to say it like that," she said with an embarrassed smile, her hijab covering her hair.

In oil-rich Iraq, women make up just 13.3 percent of the labour force, according to the World Bank, while the World Economic Forum ranked the country 154 out of 156 in its latest Global Gender Gap Report.

A study published last year by two UN agencies noted that while most Iraqis consider tertiary education equally important for men and women, "attitudes toward equal rights in employment are discriminatory against women".

Janabi attributes her success largely to do-it-yourself tutorials that she first posted on Facebook to share her passion for carpentry and furniture-making.

She uploads videos—about everything from how to re-stuff an old sofa to using a sander —to TikTok and Instagram too, where she has more than 94,000 followers.

"I am the first Iraqi woman to do this trade and break the barrier in this field," she claimed, in a country still largely dominated by conservative attitudes about women's role in society, and where those perceived as too independent are sometimes even considered immoral.

She said she receives comments from women and men telling her: "You make Iraq proud and you have accomplished something."

"May God give you strength and health!" one user commented on a video of Janabi presenting a sofa decorated with a floral pattern.
Also read: Milan designers visualise the post-pandemic home
One of her clients, Abu Sajjad, dropped by to see how his sofa repairs were going—
untroubled by prejudices some others might harbour against dealing with a female carpenter and business owner.

Most working women in Iraq are teachers or nurses, though a small number have entered the police or armed forces.

One of them is Angham al-Tamimi, who this year became the first woman army general.

In a video broadcast by the military's press service, she said she had "faced the non-acceptance of women in the military".

But she said she had succeeded thanks to her "persistence" and "passion".