Emily Cooper vs Wednesday Addams: who is the ultimate fashion icon?

True fashion icons, Emily Cooper and Wednesday Addams, the main characters of the successful series which bear their names—"Emily in Paris" (season 3) and "Wednesday," available on Netflix since late 2022—are at the heart of the most intense fashion battle in these early days of 2023 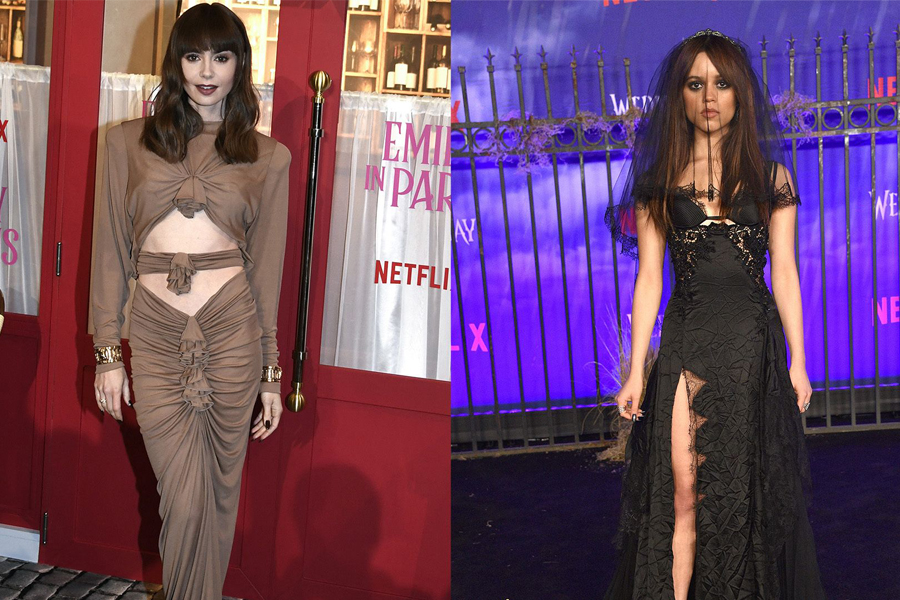 Emily Cooper or Wednesday Addams - who has the most influence on your wardrobe? Image: STEPHANE DE SAKUTIN / LISA O'CONNOR / AFP

Two TV show heroines, two different styles. One embodies quirky, eccentric glamour pushed to the extreme, the other the revival of gothic style. What they do have in common is that they are both at the origin of many trends of the moment. True fashion icons, Emily Cooper and Wednesday Addams, the main characters of the successful series which bear their names—"Emily in Paris" (season 3) and "Wednesday," available on Netflix since late 2022 , are at the heart of the most intense fashion battle in these early days of 2023. So which one has the most influence on your wardrobe? Here's what the numbers say...

While Emily Cooper's outfits have been making waves in the fashion sphere since the first season of the series aired at the end of 2020, growing ever edgier with later episodes, those of Wednesday Addams seem to be just as influential since the launch of the cult horror comedy, one of Netflix's biggest successes to date, last November. And one thing is certain, the two heroines, played by Lily Collins and Jenna Ortega, have become true fashion icons thanks to these two shows with their very distinct universes. And indeed, young viewers in particular swear by the wardrobe trends seen on the two protagonists.

On TikTok, the social network favored by the young generations in question, the battle is largely in favor of the Parisienne by adoption. The hashtag referring to Emily Cooper's outfits (#Emilyinparisoutfits) has generated more than 75 million views, while the one dedicated to the looks of Wednesday Addams (#Wednesdayoutfits) is at the origin of 'only' 3 million views. However, the heroine of "Emily in Paris" has been showing off her outfits for three seasons already, compared to just one for the youngest daughter of the Addams Family.Global fashion search engine Stylight* has also looked at the search interest generated by the two characters on Google, and once again it's Emily Cooper who is ahead in the numbers game, gradually taking the lead in this style battle. The terms "Emily in Paris outfits" generated no less than 57,000 searches last month (+87%), while the words "Wednesday outfits" only accounted for 11,000 searches (+11%), testifying to a greater infatuation for the glamour of the most Parisienne of American women.

Also read: Forbes India Rewind 2022: Best OTT shows we watched this year
Now it's time to analyze the major fashion trends inspired by these two shows to determine their impact on viewers' wardrobes. On Stylight's international platforms, it is the neon clothes and accessories that show up repeatedly in the show "Emily in Paris" that are currently the hot pick of the moment (+1,000% of clicks in December 2022), ahead of the metallic miniskirts spotted in the same program (+900%), and the black lace dresses seen in the show "Wednesday" (+540%). After that come the platform boots sported by the gothic girl (+464%), followed by multi-color clothes and accessories worn by Emily Cooper (+320%).While the American in Paris seems to win this fashion battle hands down, it is clear that gothic style is also being propelled to the top of the trends thanks to the emo high school girl. Not bad at all for Wednesday Addams.