From Virat Kohli at Forbes India Leadership Awards 2021 to Neeraj Chopra on Beyond the Boardroom, and KL Rahul on From the Field, here are our top ten most-watched videos of the year 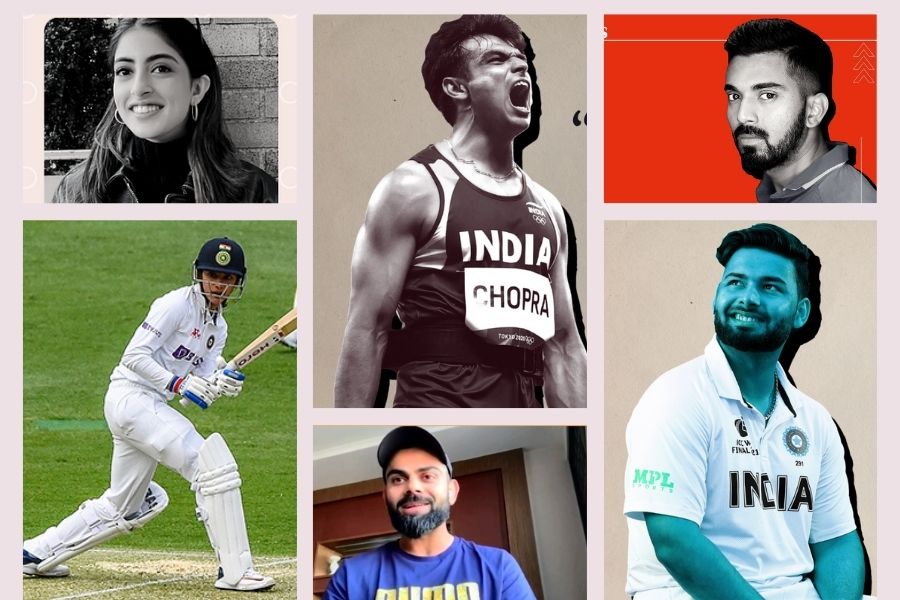 Top row: Nayva Nanda on 'Mind Matters', Neeraj Chopra on 'Beyond the Boardroom', KL Rahul on 'From the Field'.
Bottom row: Smriti Mandhana on 'Beyond the Boardroom', Virat Kohli on 'FILA 2021', Rishabh Pant on 'Beyond the Boardroom'.
This year was supposed to be easier compared to the pummeling 2020 had provided. But 2021 came in as the second act of the Covid-19 pandemic and is still not done with this blue marble in the vastness of the universe. In these tough times, we needed people to lead us, tell us about resilience, perseverance, and give us hope that this too shall pass.
How did we arrive at this conclusion? Based on the common theme of most-watched videos on the Forbes India YouTube channel. Cricketers Virat Kohli, KL Rahul, and Smriti Mandhana; 2020 Tokyo Olympics gold medal winner Neeraj Chopra; Nikhil Kamath, youngest billionaire on the Forbes India's 2021 rich list; Navya Nanda of Aara Health seem to have understood the assignment and provided the viewers with insights, vision, assurance, and leadership lessons to keep going.
We have brought them together in one place for Forbes India 2021 Rewind, in case you missed any of the great conversations we had this year.

As one of the most successful captains of the Indian men's cricket team, Virat Kohli has been crucial in building a formidable unit that is in the top three ICC ranks of all the formats of the game. How did he do it? What makes him a great leader? What drives his desire for excellence and the hunger to win? The 32-year-old swashbuckling batsman laid out all his cards in a special conversation at the Forbes India Leadership Awards 2021 in February this year.

2. We'll take a bullet for MS Dhoni: KL Rahul on Forbes India From the Field

KL Rahul has had a fantastic year on the field. Of course, the fatigue of the bio bubble was there, but if you look at track-record—his Test century at the Lord's, Orange Cap in 2020 IPL, and the runs he scored for the Indian cricket team during the 2021 ICC Cricket World Cup—it shows that the right-hand batsman was itching to get back on the field. He admits that he was born to play cricket, in this video from July 2021, but on From the Field, our show where we spoke to sporting legends on the leadership lessons they have learnt from the field, he tells us what it means to lead the team. Vice-captain of the Men In Blue and then captain of IPL team Punjab Kings, got into the details of leadership, building a high-performing, self-motivated team with the right culture, treating juniors right, and why he'd take a bullet for MS Dhoni.

3. Smriti Mandhana on Forbes India Beyond the Boardroom

Our series, Forbes India Beyond the Boardroom, is an attempt to get to know what is beyond the public personas of the celebrated people in our country. In this episode from April 2021, host Ushnota Paul got into a candid conversation with Smriti Mandhana—opening batsman for the Indian women's cricket team. Mandhana had a stellar 2021 in which she scored her first Test cricket century in the match against Australia. And she became the first Indian female cricketer to score a century in both ODIs and Test cricket Down Under. But did you know that she has a crush on Hrithik Roshan? Did you know that she experiments with eggs in the kitchen? Did you know that she is a serious gamer as well? For more such trivia about Mandhana and to know more about her beyond cricket, check out this episode of Forbes India Beyond the Boardroom.

4. Nikhil Kamath on Beyond the Boardroom

This was the inaugural episode of our series Forbes India Beyond the Boardroom. The co-founder of Zerodha and India's youngest billionaire on the Forbes India Rich List brought his A-game to this chill conversation. But we got a glimpse of his guitar playing skills. Instead of talking about the nuances of stock market investment, he spoke to us about his vintage watch collection and his love for creepy books. Your firsts are always special, they say. We agree.

The Forbes India Leadership Awards 2021 recognised leadership and excellence and celebrated the resilience of India Inc in a challenging year. The jury had their task cut out choosing between manufacturers of non-invasive ventilators and those of diagnostic tools, to highlight just two such ventures. Byju Raveendran of edtech giant Byju's, Infosys CEO Salil Parekh, Qure.ai founder and CEO Prashant Warier were some of the winners. FILA 2021 virtual ceremony had legendary NR Narayana Murthy share his vision for the future of entrepreneurship in India. Cricketer Suresh Raina and his wife Priyanka Chaudhary shared how their life changed during the pandemic. Xiaomi Global VP Manu Kumar Jain sat down to have a lively conversation with teenpreneurs (teenage entrepreneurs) Nikhiya Shamsher, Rutik Thorat, and Akarsh Shroff. Every minute of the FILA 2021 virtual ceremony was enlightening and inspiring. Take a look.

6. Neeraj Chopra on Forbes India Beyond the Boardroom

With that powerful yet elegant throw of the javelin at the 2020 Tokyo Olympic Games, Neeraj Chopra became the hero India needed in its desperate times. People will not forget where they were, who they were watching with, and how they celebrated this historic win. When Neeraj Chopra sat down to conclude season two of Forbes India Beyond the Boardroom, we were floored by his simplicity and honesty in living. The world watched him create history by winning India's first-ever Olympic gold medal in Track and Field, but we saw a 23-year-old youth who loves the laid back life of his village, enjoys homemade food, worries a bit about offending the desserts by choosing a favourite, and his brand new Ford Mustang. This is a must-watch conversation.

7. Rishabh Pant on Forbes India Beyond the Boardroom

Another firecracker on the field and a cutie beyond it. After Mahendra Singh Dhoni decided to retire from international cricket, Rishabh Pant seems to have taken the responsibility of feeling that big void for the Indian men's cricket team. This 24-year-old is now the captain of Indian Premier League team Delhi Capitals and, under his leadership, the team reached the playoff stage of the 2021 edition of the IPL. But how is he when not wearing the Men In Blue armour? In this episode of Forbes India Beyond the Boardroom, we got the answer. Watch this video to know more about his side gigs—babysitting and Hindi coaching.

8. I am the David going against the Goliath that I created: Brian Acton

WhatsApp introduced new privacy policy changes on January 4 this year. There was an uproar about the changes and many users flocked to alternate messaging apps such as Telegram and Signal. Brian Acton, the head of Signal Foundation and the co-founder of WhatsApp spoke to Manu Balachandran about the swirling debate around data privacy and the future of messaging platforms. He also spoke about the early days of WhatsApp, why Facebook may not back out from WhatsApp's controversial new privacy policy, his plan to take on some of the world's most powerful technology companies and the future of Signal.

Pandemic has turned our homes into our workplaces and celebrities are not an exception. In this exciting conversation, Chinna Thala Suresh Raina and Maate co-founder Priyanka Raina discussed how the first lockdown forced them to look at domestic life in a different way. What the lockdown taught them about each other, how they rallied together to balance career and family, and how they are growing Gracia Raina Foundation.

Navya Nanda, a co-founder at Aara Health & founder of Project Naveli talks about why it is important to start the conversation around mental health at a young age, dealing with the taboo around it and how to make social media work for you rather than stressing you out. This is part of our series Mind Matters, where we spoke to different mental health professionals and prominent voices, during the second wave of the Covid-19 pandemic.

Tweets by @forbesindia
Rajkummar Rao: Bringing realism to the reel world
Can a tiny territory in the South Pacific power Tesla's ambitions?