From landfill to wardrobe, how fashion is giving waste a new lease on life

Everything from subway seating and broken umbrellas to potato chips packets, socks and food waste are now materials of choice for a host of young talents who are trying to cut down on waste while raising public awareness about the issue of overproduction 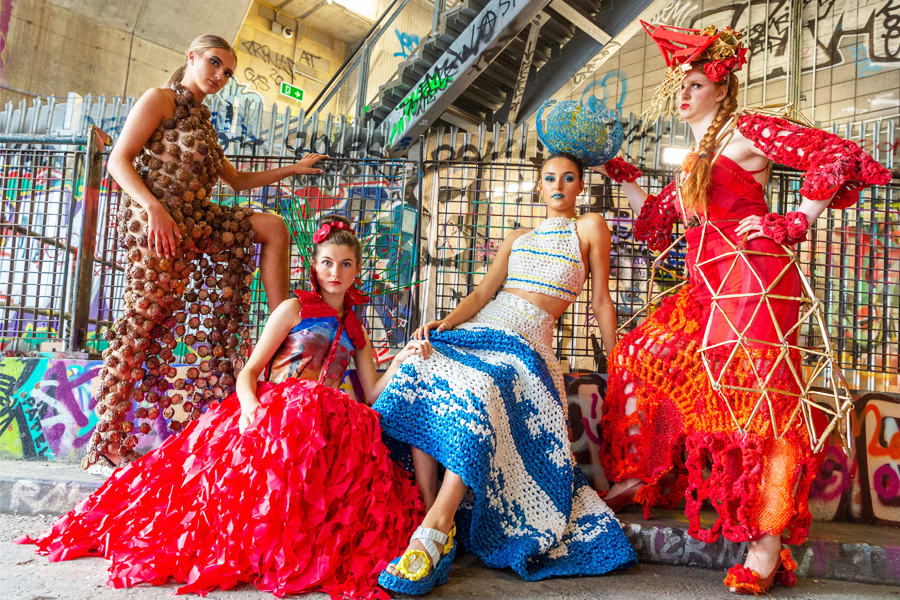 How can we reduce the impact of waste on the planet? Repulsive, dirty, even disgusting, waste never had good press, until the climate crisis forced fashion designers to get creative and reinvent. As a result, everything from subway seating and broken umbrellas to potato chips packets, socks and food waste are now materials of choice for a host of young talents who are trying to cut down on waste while raising public awareness about the issue of overproduction.

Nothing is lost, nothing is created, everything is transformed. This quote, attributed to Antoine Lavoisier, who formulated the theory of mass, takes on a whole new meaning today with the practice of upcycling, which involves giving a second life to any kind of object initially destined for the trash—and even enhancing or embellishing it. In fact, waste now even constitutes a not insignificant raw material for many fashion designers, who are determined to revolutionize the practices of one of the world's most polluting industries.

According to a 2020 report by McKinsey, the global fashion industry's carbon footprint amounted to 2.1 billion tonnes of greenhouse gases in 2019, equivalent to about 4% of global greenhouse gas emissions. Excessive water consumption, usage of chemicals and waste all contribute to the industry's impact on the planet each year. For example, Europeans throw out some four million tonnes of textiles each year, 80% of which are discarded with household waste—i.e., in garbage cans—and end up in landfill or incinerators, or make their way to the African continent.

Faced with the climate emergency, committed industry players are trying to revolutionize an entire sector through upcycling, with the aim of transforming fashion's waste into something more beautiful. Once maligned, and mostly discarded, waste materials—sometimes the most surprising—are given a new life to transform our wardrobes sustainably. Fabric scraps, airbags, sushi, umbrellas, seafood, cocoa bean husks, potato chips packets, and seating textiles are now among the raw materials being put to use by designers, entrepreneurs, or others keen to drive change and shape the ready-to-wear collections of tomorrow.

Also read: Your next fragrance could be made from upcycled elements

Waste as a new source of inspiration for fashion design

Currently booming, the practice of upcycling is synonymous with the field of all possibilities for those who embrace it, whether through simple scraps of fabric, or totally unexpected objects. Those behind these projects are doubling down on inventiveness to valorize waste, detritus, and other unwanted objects. Faguo, for example, transforms tennis balls into sneakers, while the fashion house Iris van Herpen designed a dress from used cocoa bean shells, and more recently, the designer Peter Do created two outfits using shrimp and mushroom waste.

Such projects have not gone unnoticed, due to the fame of the brands behind them, but other less-known figures in the fashion industry—or other sectors—have also taken up the challenge of upcycling with flying colors, making several surprising waste products into (now) essential raw materials. This is the case of Japan's Sapporo Breweries, which set about transforming waste from the brewing process—including malt and hop leaves and stems—into jeans. This was made possible through a partnership with Shima Denim Works, a company specializing in clothing made from bagasse, the waste product of sugarcane processing.

In India, upcycling has become a common practice in just a few months, helping to rid cities of waste. This is evidenced by the Pune-based start-up EcoKaari, which collects waste such as plastic bags, or packaging from cookies, potato chips, instant noodles, or laundry detergent, otherwise destined to pollute the land and oceans, and turns it into handbags, wallets, and even book covers. Similarly, the Urban Darzi label, whose teams are based in Kanpur and New Delhi, turn to landfill to unearth food packaging, household waste, broken furniture, newspapers and more that are then used to create new clothing items.

From airbags to umbrellas

In recent months, waste has become a particularly popular raw material, even if, paradoxically, designers' ultimate aim is to see it disappear. Especially since some of this waste is extremely polluting. This has inspired the brand Sans Les Plumes to transform seat textiles from Parisian public transport into footwear, and the label R-Coat to collect broken umbrellas from the streets of many cities in Portugal—and elsewhere—to turn into clothes. The founders of the initiative, Anna and Yasmin, have so far saved more than 2,000 broken umbrellas from ending up in landfill.

Also read: Waste is a material of choice for an Indian fashion brand Urban Darzi

The automotive industry is getting in on the game too, and is beginning to rethink the way it handles its waste by sending it, for example, to designers who can turn it into clothing and accessories. As early as 2021, Heron Preston teamed up with Mercedes to design fashion items from used airbags, and since then, initiatives have multiplied at a rapid pace. Hyundai has also chosen to upcycle some of its equipment—airbags, windshields, seats, carpets, seat belts—into clothing through its Re:Style project. As did designer Ryohei Kawanishi, who teamed up with the recycling company Nishikawa Shokai to create a collection made entirely from airbags. These are real achievements, all of which show that upcycling is indeed one of the solutions to reducing waste.

In fact, it's no longer just fashion scrap and deadstock that designers are exploiting to make new clothes, but anything that is considered polluting for the planet and/or can easily be reused. This is evidenced by the recent enthusiasm among some perfume-makers for upcycling, using clementine peels, cacao pods, and even white wine lees recovered from barrels, to create new fragrances.

Considering that 20 billion tonnes of waste are dumped in the oceans every year, there is (unfortunately) enough to make a lot of clothes. This is of course not the short-term objective. At their own level, each of these designers is trying to do something for the planet, aiming above all to raise awareness in the fashion industry, as well as among the public, of the scourge that waste, overproduction, and piles of refuse can represent for the planet.

Tweets by @forbesindia
Cofounder courtship: How to find the right mate—for your startup
This year, Europe's Christmas markets look to balance shine and energy savings