These busted-up Balenciaga sneakers can be yours for €1,450

It took less than 24 hours for the house of Balenciaga, helmed by Demna Gvasalia, to get everyone talking about its latest pair of sneakers 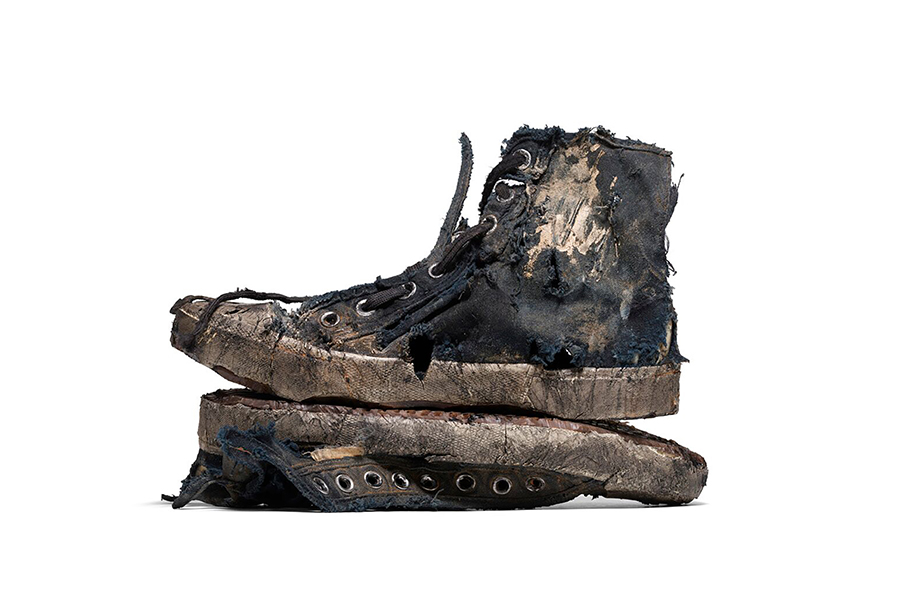 Balenciaga's Paris sneakers went viral in a matter of hours. Image: Courtesy of BalenciagaThe Balenciaga fashion house is back with another hard-hitting creation, this time in the form of a pair of busted up, worn out and torn sneakers accompanied by a hefty price tag. Designed as a tribute to mid-20th century athletic models, these sneakers have been dividing opinion on social networks, with users either praising or mocking the dilapidated appearance of these expensive creations.

It took less than 24 hours for the house of Balenciaga, helmed by Demna Gvasalia, to get everyone talking about its latest pair of sneakers. A few months after presenting a pair of hybrid pants, combining jeans and cargo shorts, then a parka worthy of a highway maintenance crew, the world's most popular luxury brand lifted the lid on a pair of totally dilapidated sneakers—worn, torn and complete with holes. And that seems a shame considering that they're being sold from between €395 and €1,450 (and that's for the most destroyed models, naturally).

With these new sneakers, the luxury brand wanted to reinterpret the athletics shoes of the mid-20th century. But, it should be noted that the models that have gone viral have been deliberately busted up for the purposes of the brand's campaign, Balenciaga wanting to show that the shoes are apparently designed to be worn for a lifetime... And so, sustainability therefore actually seems to be at the core of this new creative feat. Indeed, a closer look at the models featured on the brand's official website reveals that the sneakers appear much less worn than those featured in the pictures on social media. However, the models finished in ripped cotton—a limited edition nonetheless—are well and truly priced at €1,450.

In addition to these 'full destroyed' versions, the Paris sneakers come in high-top or mule styles, and in several colors, including black, red and white. Their ripped look, even when it remains very subtle, is reminiscent of hand-cut or customized jeans—a trend straight out of the '90s, one of the most popular decades among Gen Z and Millennials right now. So, why not do the same with our shoes? Either way, love them or loathe them, these sneakers are (once again) almost certainly destined to be snapped up like hotcakes.