When outfits become an art form

Tilda Swinton, who is never far from what's avant-garde in the creative world, is at the heart of a project that maps an intersection of art and fashion through outfits that resemble monuments. We explain 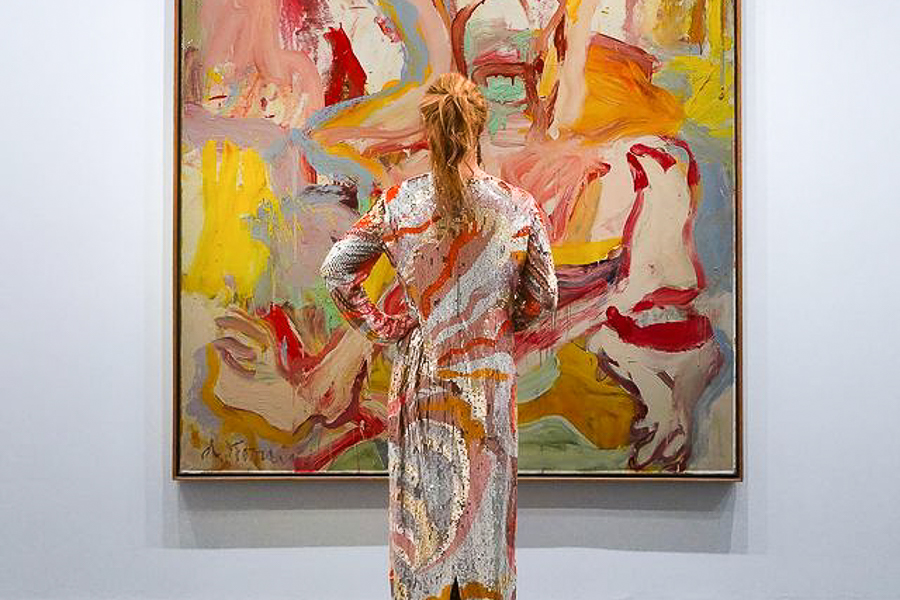 The creator of the Instagram account @matchwithart offers internet users the chance to discover the exhibitions of the moment by matching her outfits to the works of her choice.
Image: Matchwithart / Instagram

Fashion designers have long looked to creations by the world's great artists and architects for inspiration as they create their collections. And sometimes the clothes themselves are works of art in their own right. And Tilda Swinton, who is never far from what's avant-garde in the creative world, is at the heart of a project that maps just such an intersection through outfits that resemble monuments. We explain.

Tilda Swinton is known for her edgy style, combining androgynous looks with architectural silhouettes. Something that has clearly not escaped the expert eye of journalist and designer Jude Atwood. He has dedicated a Twitter thread to the British actress's most extravagant outfits, comparing them to libraries like the one at Texas Southern University in Houston. This university building looks remarkably similar to a lilac ensemble by Haider Ackermann that Tilda Swinton wore to the Golden Globes in 2012.

Another example features a portrait of the award-winning actress photographed by Peter Hapak for TIME magazine in 2011. In the image she is wearing a royal blue coat that may remind bibliophiles of the Stuttgart Public Library. It's a nice touch, since this futuristic building with its sleek design, designed by Yi Architects, was inaugurated the same year.

Several internet users and libraries have joined in, posting their own contributions to the thread initiated by cartoonist Jude Atwood on December 7. The Lawrence Public Library in Kansas compared itself to a copper-colored outfit worn by Tilda Swinton on the cover of Candy magazine. Staff at the Herman B Wells Library in Indiana, on the other hand, think their building looks uncannily like the beige monochrome look worn by the actress in the movie "Doctor Strange."

Just one step between fashion and art

For Jude Atwood, the popularity of his thread underscores just how sharp the architecture of some public buildings can be. As sharp as Tilda Swinton's style, which fashion and celebrity publications have repeatedly lauded over the years. "Celebrities, even indie celebrities, wear a lot of different outfits; many famous people are never photographed twice in the same clothes," he told AD magazine. "Civic architecture around the world is a lot more outré than most people realize; even some small-town libraries have some really beautiful design elements."

The creator of the Instagram account @matchwithart gave herself the same mission. She offers her followers the chance to discover the exhibitions of the moment by matching her outfits to the works of her choice. For instance, she chose a colorful dress to "blend in" with the abstract canvas "Net-Grid" by Malaysian artist Mandy El-Sayegh. Art lovers can discover it until January 15 in the Thaddaeus Ropac gallery, as part of the exhibition "Figure One." If you go, be sure to take special care in what you wear.

Tweets by @forbesindia
Mushrooms on track to become the superfood of 2022
Scrap the big new year's resolutions. Make 6 simple changes instead