Falling off the tourist grid at Daytona

The US of A has pockets of friendliness that are ignored for the magnetic pull of New York and DC. Here's how to find yourself there 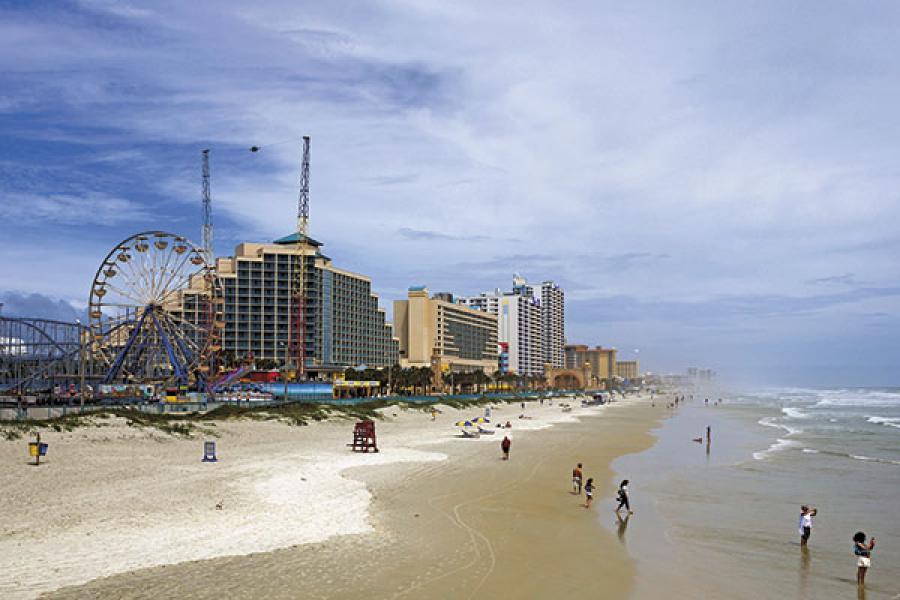 Image: Getty Images
An amusement park and hotels line the famous boardwalk at the Daytona Beach in Florida

Walking on the beach at Daytona, alongside the Atlantic Ocean, you are reminded that before it was christened Mother Nature, the Earth was a non-anthropomorphised planet. The third rock from the Sun, churning an atmosphere, weather, landmass and ecosystems.

The reminder is in the clouds as they roll vast and wide across a continent of water. Sometimes, a seagull sweeps by too close for comfort, swooping down for some fish. Slowly, human life emerges, fittingly, from the sea. On the horizon, early surfers straddle the waves. Neon-clad pensioners jog against Father Time. A miniature dog skips alongside.

This is beach town America in Florida, usually left out of the circuit of Indian holidayers—not one of the destinations that hover low over our collective subconscious. It’s not the Americana of Purdue where our Normcore compatriots go to school or Silicon Valley where they attend the courts of technology aristocracy nor is it New Jersey where we settle to bring up our desi kids on coriander and weekend trips to the Museum of Modern Art (MoMA). Orlando is on the right, where khaandaans gather Barjatya-style to revisit their childhood friends Donald and Mickey; Cape Canaveral is on the left, where children are readied for adulthood and a career in science. At Daytona, America comes to delight in typical summer pleasures—walk along the boardwalk chewing saltwater taffy, surf, karaoke and eat a lot of tilapia and Atlantic salmon.

Small-town America does not get as much mileage as its quaint counterparts in Europe. One can have a confusing relationship with it—much of its backdrop is familiar because of the deep penetration of its popular culture and nomenclature. It is also the touchstone of success for generations that specifically studied streams that would bring them employment here. Too many lives have been moulded by what can be done to achieve a green card.

And those lives were not dreaming of living in Winter Park, Daytona or Cape Canaveral of Florida. Yet that life has its own charm. A laid-backness that can only be American. Where else would you find Salty churches—drive-in places of worship near the beach where you can catch a sermon by tuning into a pre-decided frequency and then head off to surf.

Every local and holidayer loves to talk here. Avoiding eye-contact and ignoring others is considered rude. You are greeted with a cheery ‘Hello, howyoudoin?’ when you enter a store and immediately informed about sales or special offers. Fellow shoppers will offer an opinion when you stand in front of a mirror with a quizzical expression and a dress in your hand. Most admirably, in a world that seems to be glued by criticism or judgement, this banter is funny, inoffensive and non-judgemental. 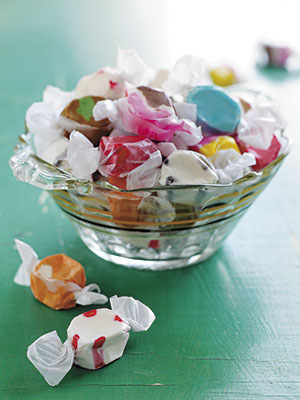 Each community treasures its history and goes to great lengths to preserve and nurture it. Most small businesses, such as the Angell & Phelps Chocolate Factory of Daytona Beach, will offer tours of their premises. Attend these, if not for acquainting with the area then at least for the chuckle-worthy commentary.

Humour is the most defining characteristic in this part of the world. A tip box for the driver of our hired car read ‘Vegas Money’. “From the moulds, the chocolate goes to the conveyor belt, then to the cooling rack and from there to my hips,” said a silver-haired, coiffed nana as she gave us a tour of the factory that produces unholy delights such as chocolate-coated bacon, popcorn and potato chips, besides the usual soft centred and nutty varieties.

While taking us on a boat tour of the Winter Park suburb near Orlando—the resort town built around six lakes by business magnates and all-round important people such as Colonel Franklin Fairbanks in the late 19th and early 20th centuries—the silver fox steering the motor boat through the chain of lakes says, “We call this the New Money Lake, as opposed to the Old Money Lake. I live by the No Money Lake on the other side.” On another turn, as we pass another late 19th century waterfront mansion with peacocks in the front lawn and a boat house the size of a Mumbai apartment, he calls out to an invisible figure, “Hi honey! I’ll be in for lunch soon!” 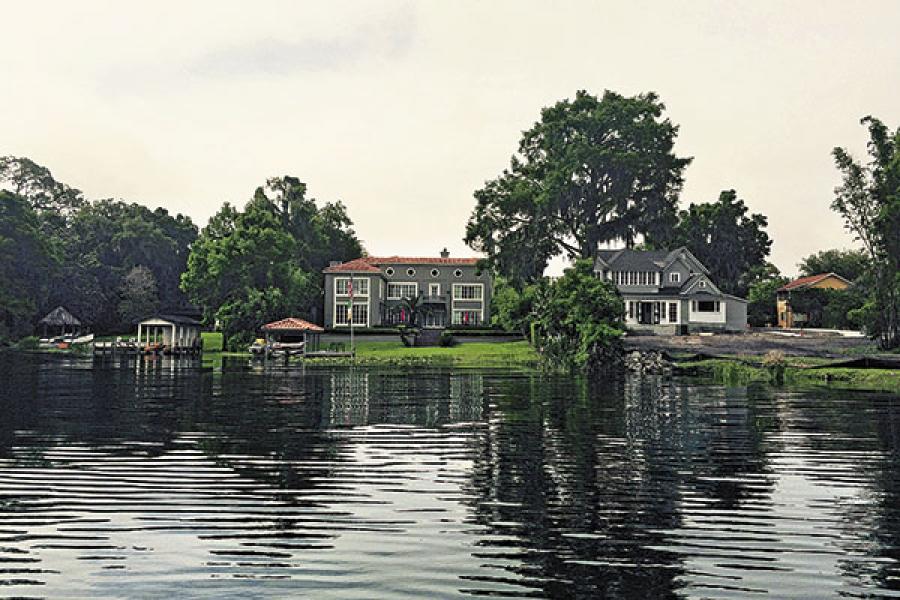 “What’s not to like,” says a store manager when I ask whether she likes living here. “We’re rich! We’re retired! We only shop and brunch!” Even store fronts like to make you laugh. A shop with frocks so muted they have to be outrageously priced calls itself The Impeccable Pig. A jewellery store sanctions your indulgence saying, ‘Your husband called. He says you can buy anything you want.’ Another shop is simply called Filthy Rich.

The communities, inevitably, are relatively small and tourist attractions few: Cape Canaveral has the Kennedy Space Center which houses the space shuttle Atlantis; Daytona has the Daytona International Speedway and the Daytona 500 motor race. The effort, then, is to cultivate engaging leisure activities based around local treasures.

Dunn’s Attic, the antique and vintage store in Daytona Beach, arranges its wares as if it was a home and you walk through one room to the other. Every week, the owner takes the trouble to re-arrange the ‘house’ so that you will spot things you missed on the last visit.

Frappes, located across the street from Dunn’s, conducts cooking classes held by its self-taught chef. The seafood —fresh salmon, tilapia and grouper—comes fresh from the fisherman next door and you can learn to cook the meals. If you don’t have time to attend a class, be shameless enough to ask for the recipe. Chances are, chef and proprietor Bobby Frappier will share it with you.

America records community history with the diligence of a cat-loving librarian. It is good work that binds a town together, telling its people where they come from and injecting even working class heroes with pride. Lighthouses, such as Ponce in Daytona, have mini museums holding tools of trade, photographs and tales of family life of the keepers (and their dogs). 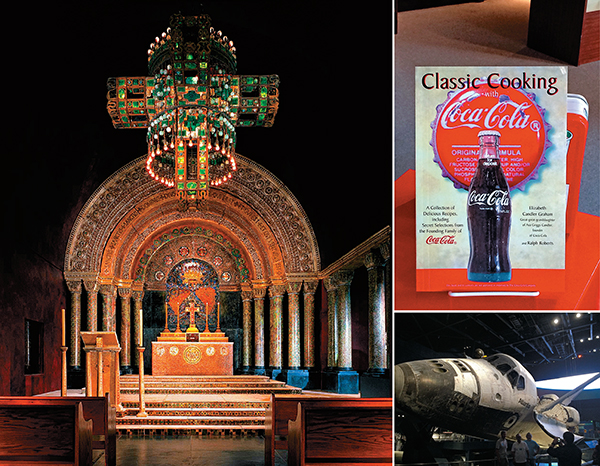 If you like modern history, particularly the fizzy kind, the MOAS (Museum of Arts and Sciences) at Daytona Beach has an amusing collection of Coke artefacts such as bottles, dispensing machines, marketing memorabilia and medicinal formulations based on the drink. There are also luxurious train carriages, furniture, paintings, quilt and doll collections and Nellie, the fossil that was found in the area (though the gender of the giant sloth is a mystery, all the women at the MOAS treat her as a girl).

The Charles Hosmer Morse Museum of American Art at Winter Park has the world’s most comprehensive collection of glass art by Louis Comfort Tiffany, including the chapel interior he made for an expo in 1893 and also the Daffodil room from the artist’s Long Island residence Laurelton Hall. Louis was the son of Charles Tiffany, who founded that prestigious store where Audrey Hepburn’s Holly Golightly stopped for breakfast in Breakfast at Tiffany’s.

Then there are the wonders of the scientific world. At the Kennedy Space Center at Cape Canaveral, there are video clips of engineers talking about the less complicated things that went into NASA’s space missions. The big draw is the Atlantis exhibit. This is also the place that has a memorial for fallen astronauts, including Kalpana Chawla who we lost in the Space Shuttle Columbia disaster of 2003.

The greatest attractions in any of these places is a sense of intimacy, value and treasuring of what is ours—be it a 200-year-old desk or a quilt collection. This is us, every town says, and urges you to appreciate the unique in the ordinary.

Author Salman Rushdie has said of the internet that it has vast length but little depth. The small towns of America are the opposite.