To enable transgender people gain access to Covid-19 treatment and vaccines, there needs to be a fundamental shift in how health care systems view them, Shaikh, associate professor of community medicine at Hamdard Institute of Medical Sciences and Research; and Raghuram, project coordinator, Sangath, write 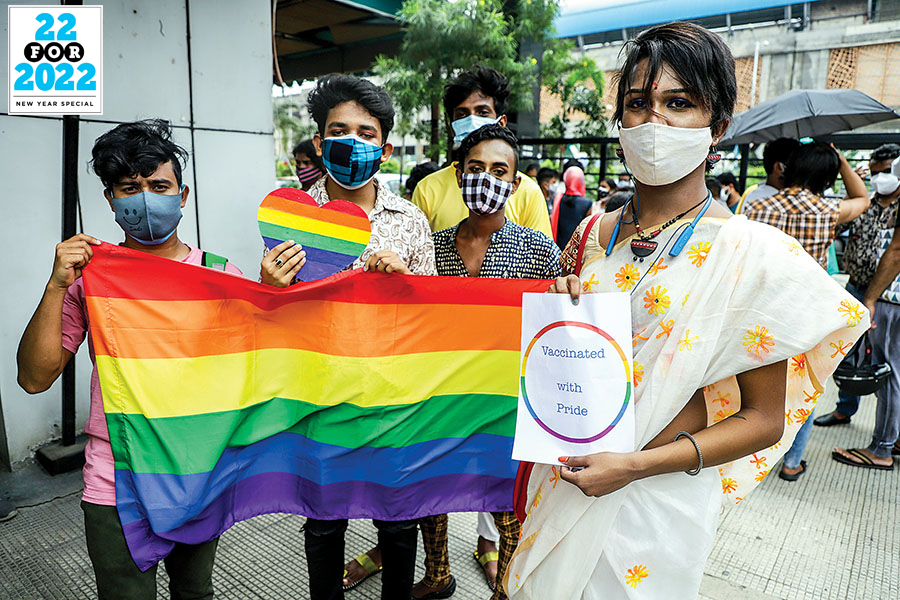 The lack of data to track the progress of vaccinating transgender individuals has not been taken as a serious issue by the government
Image: Getty Images 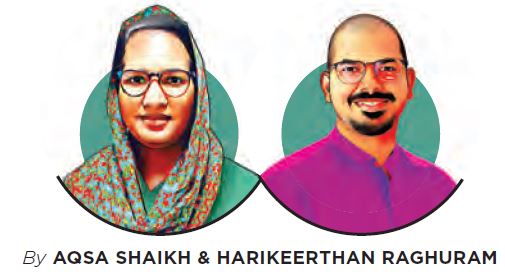 “Despite being a faculty in the same medical college, there were mistakes made in the care given to me because of my gender identity. The shadow of the breast implants seen in my chest X-Ray was mistaken as pneumonia and I was given unnecessary antibiotics. No one asked me about my medical or surgical history related to transition.”– Aqsa Shaikh

These are just some of the several challenges faced by transgender individuals while accessing health care in India. Now the Covid-19 pandemic has greatly exacerbated this inequality in access. And one of the pressing consequences we are seeing is challenges in Covid-19 vaccination.

The lack of data to track the progress in vaccinating transgender individuals has not been taken as a serious issue by the government. Government officials argue that since vaccination centres are not gender-segregated, there is no reason for transgender individuals to not get vaccinated. But several people in the community have faced a lot of difficulty getting vaccinated, which is often viewed as vaccine ‘hesitancy’ at the individual level. Instead, this needs to be viewed against the backdrop of the systemic discrimination, historical marginalisation and negative experiences faced by transgender individuals in the health system.

Vaccination ‘hesitancy’ due to systemic issues

Several transgender individuals have had difficulty getting concerns around vaccination addressed. There are apprehensions about side-effects because a lot of transgender individuals are on hormone replacement therapy or are undergoing treatment for HIV or tuberculosis or gender-affirmation surgeries. Usually, when someone has a medical doubt, they consult a medical friend, visit a clinic to ask a doctor or access the internet. However, transgender individuals are at a huge disadvantage. It is unlikely they have friends who have graduated in medicine or nursing, they hesitate accessing a clinic or hospital due to past bad experiences, and are unlikely to find information on the internet due to lack of data on health issues related to transgender persons.

Systemic discrimination of transgender people have resulted in lower levels of education, lower income status, poor access to health and social isolation. When someone has had traumatic experiences, including abuse, every time they have visited a health facility, it is not an easy choice to visit a hospital. Lack of information on trans health issues is related to the lack of enough research on transgender health concerns.

Research priorities need to respond to the needs of the community. For example, because of the Aids epidemic, there is a lot of research of HIV/Aids in the community, but not much research on the social determinants of health and health access. It must be noted that vaccine trials have systematically excluded trans individuals as they are put under ‘vulnerable population’. The only data available is anecdotal.

No special drives/efforts have been made to communicate vaccine adoption among the transgender community. Only an advisory has been released by the Government of India, which does not serve the purpose. Further, difficulty in getting legal identification such as Aadhaar cards also impedes access to vaccination. Thus, it is not fair to label such structural and systemic issues as ‘hesitancy’. Several of these challenges, present from before the pandemic, have been significantly worsened by it.

Challenges due to Covid-19

When lockdowns and other restrictions are announced, transgender individuals, several of whom who are otherwise dependent on traditional professions like ‘badhai’, sex work and begging for their livelihood, lose their source of income. Measures like social distancing are nearly impossible to follow as a huge proportion of the population lives in overcrowded housing. In addition, with hormone therapy-related lower immunity, higher rates of chronic diseases, HIV and tuberculosis, and higher rates of substance abuse, they are at an increased risk of infection and death due to infection.

But despite this higher risk of infection and death due to infection, several transgender individuals are scared to be hospitalised and hence resort to self-medication even if it means getting oxygen cylinders at homes, if they can afford it.

Further, lockdown and other restrictions have also taken a serious  indirect toll on the community. For example, a lot of transgender individuals, after losing their livelihoods and unable to pay rents, have been forced to move back to a relative’s house, disconnecting them from the vital social connection with the rest of the community. This results in an increased mental health burden, with reports of several transgender individuals going into depression and dying by suicide.

Two years ago, India passed a historic Transgender Persons (Protection of Rights) Act, 2019, which was the first Central law to recognise the existence of transgender individuals. The law explicitly mandates the need to ‘facilitate access to transgender persons in hospitals and other health care institutions and centres’. Despite this, not much action has been taken for the last two years. We could start with implementing this legislation.

To facilitate equal access, there needs to be changes in the attitudes of all health care staff, not just doctors. For this there needs to be gender sensitisation and inclusion, starting from the school level—often to unlearn the social biases that we passively learn. Recently, the NCERT released a roadmap for trans-inclusion in schools, which is extremely important in this context. Unfortunately, it was taken down due to the backlash. 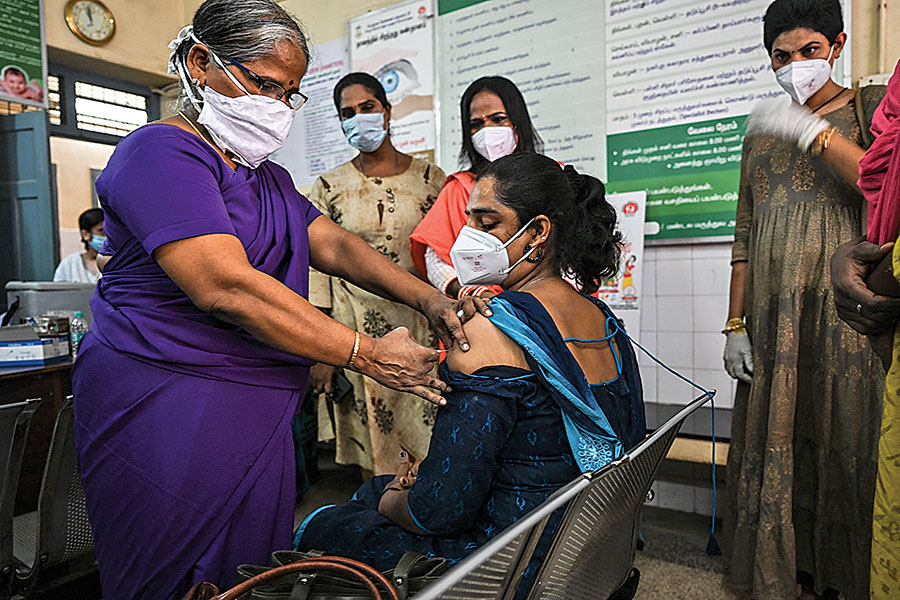 The government can take the help of community-based organisations to launch a separate vaccination drive to reach the transgender community
Image: Arun Sankar/ AFP

At the undergraduate and postgraduate level, the medical curriculum needs to be reformed. Currently, doctors and nurses are taught a lot of content that portrays transgender individuals as sexual perverts, people with mental health problems and biological disorders.  In response to multiple court orders, the National Medical Commission recently sent a directive to remove content that is derogatory to the LGBT community. However, it does not give a road map, does not clarify what such content is and does not amend its own problematic competency-based medical education (CBME) curriculum. Recently, the Dean of Kasturba Medical College, Manipal, announced that they will take steps to make their campus and teaching trans-inclusive. Several more medical colleges and hospitals need to take such leadership.

Because of how the medical system has historically pathologised trans experiences and seen it as disorders to be fixed, abusive forms of treatment like conversion therapy are common. Conversion therapy is where doctors try to ‘convert’ someone’s gender identity or sexual orientation using psychiatric medication and counselling. This has scientifically proven to be harmful but continues to be practiced. The Madras High Court and the Kerala High Court recently directed the State governments to frame guidelines to ensure that stringent action is taken to prevent the practice of forced conversion therapy often subjected to persons belonging to the LGBTQIA+ community.

Besides medical education and practice of unethical treatments, medical college and hospital spaces also need to be made safe for, and inclusive of, transgender individuals. These spaces are often segregated in the male-female binary and therefore excludes transgender individuals. For example, trans individuals are often pushed away from both the male and female lines. Lack of gender-neutral toilets means they have to hold their pee for the whole duration they are in the hospital. Both health care staff and other patients and relatives often stare at them, laugh at them, make jokes, and even abuse them. Such experiences impede trans individuals’ access to health care, with serious downstream effects.

For vaccination, there needs to be a separate vaccination drive to reach the transgender community. For this, the government can take the help of several community-based organisations. In addition, the government needs to allow registration for vaccination without the requirement of Aadhaar cards or smartphones. Of the 488,000 transgender individuals, only 64,374 have Aadhaar cards, as told by the government in the Lok Sabha recently. In addition, there needs to be more information and education for the transgender community on vaccines. This communication campaign cannot be just on social media, but on the ground, even door-to-door. We also need more research on the safety and efficacy of vaccines for trans individuals with varied medical experiences.

We also need to realise that the stigma and discrimination felt by transgender people is pervasive and is now part of the way the health system and society is structured. Hence, it is necessary for a complete foundational shift in our thinking of gender and how gender norms are enforced in society. Unless we start reflecting on the way we have constructed gender in society, the marginalisation of transgender people will continue and transgender persons like me (Aqsa) will continue to receive improper care in health care settings.

Shaikh is associate professor of community medicine at Hamdard Institute of Medical Sciences and Research, Delhi, and Raghuram is project coordinator, Sangath, Bhopal