From rights of its drivers to harassment and a toxic work culture, spying on rivals, covering up a data hack, and more, here are five controversies that plagued Uber before Uber files revealed its bare-knuckle expansion tactics 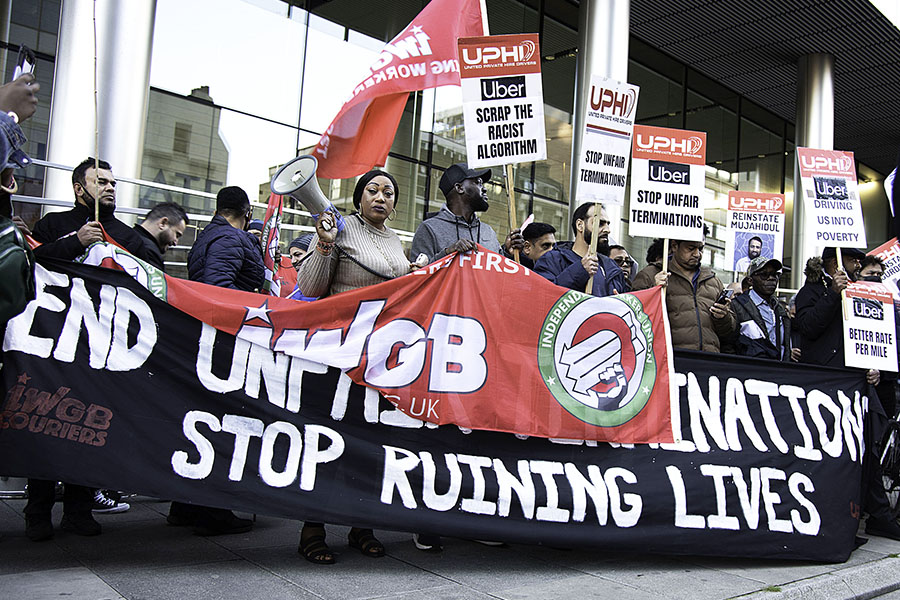 A file photo of Uber drivers' strike, holding a banner and placards at Uber's headquarters in London, October 6, 2021. during the demonstration. Uber drivers demand better rate per mile, 15% max commission, transparency of charges on customers, no fixed rate trips, among other things. Image: Loredana Sangiuliano/SOPA Images/LightRocket via Getty Images

Paris, France: Even before new leaks emerged via the ‘Uber Files’ revealing bare-knuckle expansion tactics at ride-hailing giant Uber, the app was dogged by controversy over harassment, hacking and standoffs with the authorities over its workers' rights.
This is what we knew about Uber, founded in 2010, before the joint media investigation.

Since the outset Uber has been fighting an ongoing battle over the status of its workers, which it insists are freelancers, a flashpoint issue across the gig economy.
In March 2021, following a ruling by Britain's High Court, Uber agreed to give its UK drivers workers' entitlements including holiday pay and a pension. Its 70,000 drivers there should now earn at least the minimum wage.

In the US, the Biden administration in May 2021 blocked a rule handed down under former president Donald Trump that would have prevented gig workers from demanding a minimum wage or overtime.
In December 2021, the European Union tabled plans that could force Uber and other platforms to treat their workers as fully-fledged employees.
French and Dutch courts have ruled the contract between Uber and its drivers is an employment contract.

Co-founder Travis Kalanick resigned from Uber in June 2017 amid heavy pressure following reports about a cutthroat workplace culture, harassment and other ills.
His exit followed a probe led by former US attorney general Eric Holder, who investigated allegations of misconduct and ethical lapses at the company.
Uber fired 20 people following the probe, which examined 215 claims of discrimination, harassment, unprofessional behaviour, bullying, retaliation and "physical security".
Also that month a woman raped by an Uber driver in India filed a lawsuit accusing Uber of invading her privacy and defamation.
In May 2018, Ingrid Avendano, who worked at Uber from 2014 to 2017, filed a lawsuit in a California top court.
The lawsuit contended Uber's work culture was "permeated with degrading, marginalising, discriminatory, and sexually harassing conduct towards women" and that this was perpetuated and condoned by managers.
Avendano's lawyers stated she raised concerns but "was met with Uber's entrenched disregard for the rights of its women employees and a refusal to take effective steps to prevent harassment."

In 2017, the US investigated Uber over suspected corruption and the use of illegal software to spy on rivals or escape the control of authorities.
The same year Waymo, formerly known as the Google self-driving car unit, filed a lawsuit claiming former manager Anthony Levandowski took technical data with him when he left to launch a competing venture, Otto, later acquired by Uber.
Waymo argued that a "calculated theft" of its technology netted Otto a buyout of more than $500 million and enabled Uber to revive a stalled self-driving car programme.
Uber temporarily suspended its autonomous driving testing in several locations in the United States after a pedestrian was killed in a March 2018 accident in Arizona.

Uber was vilified when it emerged in 2017 that data on 57 million of its riders and drivers had been hacked the previous year.
Investigations were opened in the US and Europe and in August 2020, US prosecutors charged the company's former security chief Joseph Sullivan with covering up the hack.
Prosecutors said Uber paid the hackers $100,000 in bitcoin cryptocurrency, with Sullivan wanting them to sign non-disclosure agreements promising to keep mum about the affair.
Kalanick was advised of the breach shortly after it was discovered, but it was not made public until the new chief executive Dara Khosrowshahi, appointed in mid-2017, learned of the incident.

Recently, drivers who had worked with Uber for years suddenly found themselves banned from the app.
Uber cited problems with documents, fraudulent behaviour like renting out accounts and security reasons such as physical or verbal attacks reported by customers.
In July 2021, Uber added an appendix to its terms and conditions stating it could permanently restrict access to the application without particular reason and at any time.
© Agence France-Presse

Tweets by @forbesindia
1% TDS on crypto in India
What is Geneva, the new social network that's the talk of Gen Z?